Many readers probably noticed that during the last two Federal Open Market Committee meetings -- in late July and mid-September -- the market was near the highs and then sold off afterward. I am fond of saying that the market shows us a pattern over and over again and as soon as we learn the pattern, it changes. So let's see what's similar and what's different from then and now.

We'll begin with July. What's different is breadth: It was not making higher highs them. The McClellan Summation Index had rolled over mid-month and was heading down (blue arrow). As of now, the Summation Index is still rising. It would require a net differential of negative 700 advancers minus decliners to roll it over, so if we were looking for a similarity, we'd go with September (green arrow) since the Summation Index rolled over after the meeting, not before.

Now look at the Oscillator. In July, it peaked early in the month and by the end of the month it was hovering at the zero-line, showing weak momentum for a few weeks prior. In September, the overbought condition was coincident with the FOMC meeting. Also, notice how the Oscillator has a similar shape as it had in September. In other words, using the Oscillator and breadth, July was weaker heading into the meeting.

Notice the number of stocks making new lows. See how in July, the 10-day moving average turned up in the middle of the month? See how in September it turned up just after the FOMC meeting? Yet, it has flattened out in the last few days, but thus far has not turned up.

The Investor's Intelligence bulls were 58% in July. In September they were a fraction over 55%. Now they are 54.2%, so they are fractionally under 55%. Thus this is less like July than September using this metric. 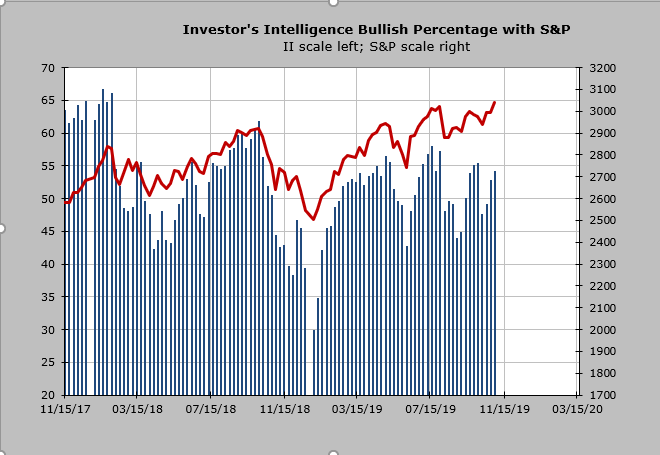 The 10-day moving average of the put/call ratio got down to 85% in early July. By the time late July rolled around, it had bounced and come back down, making a higher low. In other words, sentiment had been frothy-despite weakening breadth-for a few weeks already.

In September the moving average got to 91%, while I was waiting for it to get under 90%. Now it stands at 90%, having just reached that level on Tuesday. So I'd call sentiment complacent, but not necessarily giddy. It was giddy in July.

Finally look at the Volatility Index: In July it had been milling around that 12-14 area the entire month. In September, it got down there just around the same time as the meeting.

I cannot compare this time to July with any confidence, since the indicators look so different. There are some similarities to September, but the market rarely plays out exactly the same. So sure a correction could show up -- I would welcome one, because it would get the Oscillator back to an oversold condition and shake out some of the complacency -- but that would be all I see for now.

Get an email alert each time I write an article for Real Money. Click the "+Follow" next to my byline to this article.
TAGS: Federal Reserve | Investing | Stocks | Technical Analysis | VIX |