So, that's what an oversold rally looks like -- remember it, because we could see more.

The move up was helped by a reversal in the U.S. dollar, which closed down on the day. As usual, the key will be how fast everyone decides to turn bullish.

I will say that I wouldn't be surprised if the market gives back some of the gains in the next day or so, but over the course of the next week or two I expect more from the oversold rally. First of all, if we come back down in the next day or so we'll be right back to as oversold as we were coming into Wednesday.

But there is also the sentiment side of the ledger. We've discussed the options ratios, which show how many puts were bought over the last week or so and has therefore put the 10-day moving average of the equity put/call ratio back to similar levels it was at in May and June. So any further downside would simply lift them more, it would not change where they are.

Of course with the market rallying the Daily Sentiment Index (DSI) readings lifted, but, here again, they did not lift tremendously as the S&P Nasdaq and even bonds are all at 20. Therefore if we fall back down for another day or two they will go right into an extreme sentiment zone again.

Then there is the Investors Intelligence bulls which shocked me by falling nine points to 29.7%. Recall just prior to my vacation they were at 45% so this is quite a shift. It is the lowest reading since we saw 26.5% in June. 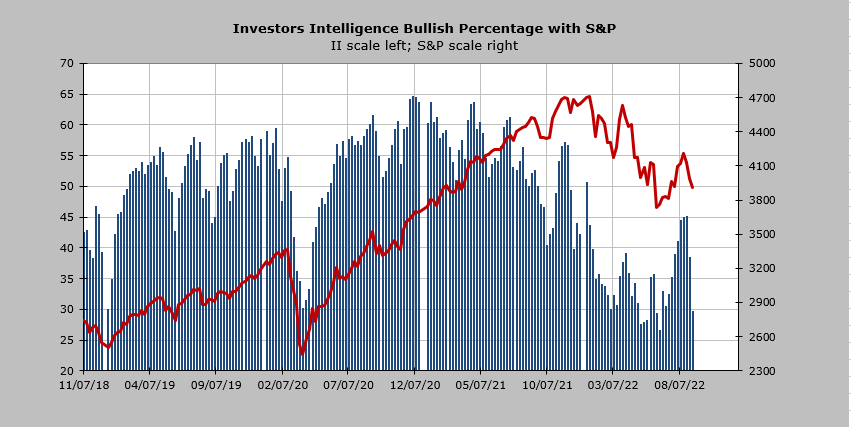 What is so curious, though, is that folks did not leave the bull camp for the bear camp, but rather hopped on the fence, into the correction camp. The bears barely budged and are now at 29.7%, equal to the bulls. So we've gone from more bulls than bears to the same for each camp.

Now the corrections are at 40.6%, which is pretty high; it is the most since March 2020. If we add the bears and the corrections together we get 70%, which is the highest since we were at 73% in mid-June and for further reference, this peaked at 77% in October 2008.

The Hi-Lo Indicator for the New York Stock Exchange has nudged down to .14, so it has stepped a toe into oversold territory. Nasdaq's is at .13. These are the first intermediate-term indicators that have gotten close to oversold.

In sum, despite the rally and the possibility of some give-back, I still think over the course of the next week or so we should see more of an oversold rally.