We are riding high on hope.

Hope Gilead Sciences (GILD) does have a treatment answer for Covid-19 (note: treatment versus cure). If that is the case, then I expect politicians will be more aggressive in trying to get their economies open.

Whether the consumer responds is another story. You can lead a consumer to a reopened economy, but you can't make them spend.

The way the market is buying hand over fist, it would almost appear as if we anticipate the second half of the year to return to the glory days of January and February. That means we're pretty much tossing aside May and June, probably part of July as well because, let's be realistic here, just because economies are declared open doesn't mean they will open.

The slow rollout of 25% capacity is enough for many small businesses like restaurants to justify reopening. It is more profitable to run a skeleton staff and continue carryout or delivery business. I do believe we'll see a small wave of initial relief spending, folks with pent-up needs to shop for whatever, but I also think that will cool rapidly.

The biggest risk is any flare up before we're even at 50% reopening levels. At that point, we're likely to overshoot back from where we came both in terms of shutdowns and the market levels.

The challenge is applying logic to trading. It rarely works.

For instance, I've been watching the SPDR S&P Oil and Gas Exploration and Production ETF (XOP) rally in the face of oil stuck under $20. Sure, oil has rallied some 30% today, but moves of 10% to 25% higher or lower have become a daily occurrence with June Crude trading in the teens.

What has caught my eye is the short-term correlation between WTIC (West Texas Intermediate Crude) and XOP. While we've had dips in the correlation between XOP and WTIC during 2020, they've been swallow even when sharp and they've always remained positive. Now, we have a moderately strong negative correlation approaching the -0.70 level. 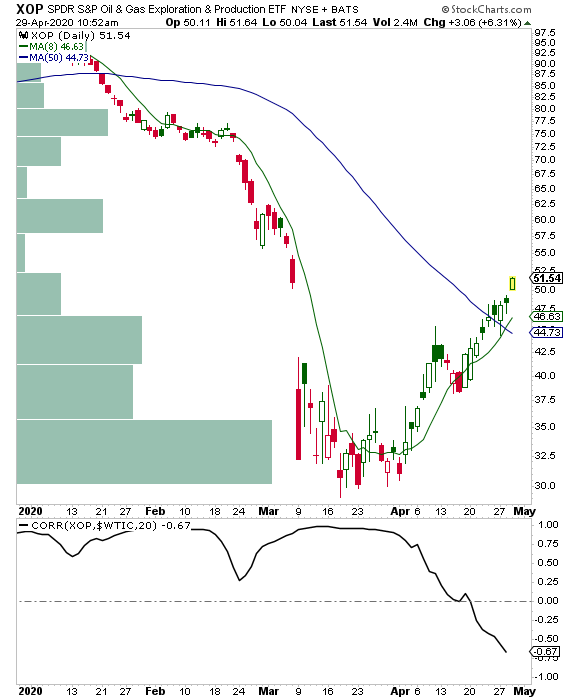 If we extend that comparison back five years, we're hitting lows last seen in 2015. We're also hitting a pure inverse correlation. Think about that logically. If you're struggling, you aren't alone on that one. 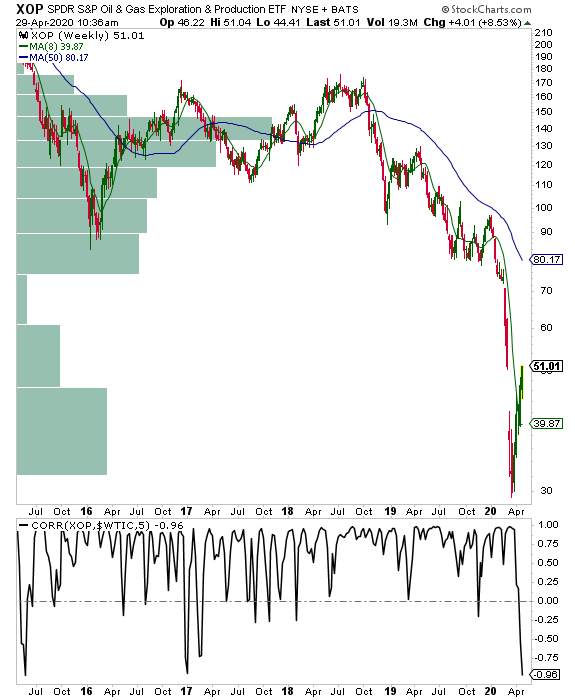 We've seen these levels twice in the past half-decade. Both led to huge declines in XOP over the next six months.

Something to consider if you're looking for a longer-term market-related put play.

Get an email alert each time I write an article for Real Money. Click the "+Follow" next to my byline to this article.
TAGS: Earnings | Economy | ETFs | Federal Reserve | Investing | Oil | Stocks | Trading | U.S. Equity | Coronavirus