Increased heart rate. Rising blood pressure. Hyper alert. Muscles moving. toward something, or away from something. Flight or fight? Or a struggle to keep up?

FOMO? Financial markets, equity markets in particular, put on one heck of a show on Wednesday, a show that gained momentum over the final four hours of the regular session but appears to have finally paused to catch a breath or two overnight.

The lesson? Expect nothing. Prepare, at least mentally, for everything.

Markets will need to digest weekly data on Thursday for jobless claims. Then on Friday (tomorrow), ahead of a three-day holiday weekend, the Bureau of Labor Statistics will release its monthly employment surveys. A time-tested recipe for risk-off behavior? We shall see. First, let's try to understand the Wednesday melt-up.

The action on Wednesday was just stunning. "They" just kept buying stocks, many kinds of stocks, and they came in waves. They bought the blue chips. They bought large-caps, mid-caps and small-caps. They bought the Transports. Bond proxies such as Utilities and the REITs responded well to demand at the long end of the Treasury yield curve.

This was more than that, though. This was about increased potential for a healthier economy. The U.S. dollar found some support. Still, the Materials sector was very strong, not led by miners, but led by the "containers and packaging" industry. Hmm.

The fact is that 10 of 11 sectors not only closed in the green, 10 of 11 sectors (using Select Sector SPDR ETFs as proxies) closed up almost a percentage point or more. Indeed, five sectors closed at least 2% higher.

How about this one? Health Care closed up 2%, led not by the Biotechs or Big Pharma, but by Medical Supplies. Again, hmm...

Information Technology may have finished in 10th place, but the group was dragged upon by the hardware group including Apple (AAPL) . Semiconductors roared as loud as any single market industry group, led by the equipment (wafer) manufacturers such as Lam Research (LRCX) , KLA Corp. (KLAC) and Applied Materials (AMAT) .

Stat of the Day

First, you want some more? We've got some more. Check this out.

At the New York Stock Exchange, winners beat losers by nearly two to one. Advancing volume crushed declining volume by almost three to one. New highs beat new lows 165 to 12.

Let's hop on the "2" train and head up to the Nasdaq Market Site. Yes, the picture was somewhat less euphoric up at Times Square. Winners still beat losers by more than 700 issues. Advancing volume beat declining volume, rather decisively. New highs beat new lows 261 to 49. Forty-nine new lows? How dare they? Trading volume increased significantly at both exchanges. Just sayin'.

Now, for the "Stat of the Day." I bet you did not know with the Nasdaq Composite closing Wednesday at 12,056, that should this index suffer a 10% correction here on Thursday it would still close above its 50-day simple moving average of 10,801. Now, that's incredible. It would take a correction of 10.4%. The S&P 500, though outperforming the Nasdaq Composite on Wednesday, could only withstand a correction of 8.8% to be put in the position of defending its own 50-day line.

What This Was Not

This market did not rally on Wednesday based upon economic news. The market did not miss a beat when the ADP Employment Report disappointed badly on Wednesday morning even as that data suggested a real dearth of hiring at the small business level, which is a historical strength. The market did not rally because of anything anecdotally stuffed into the Fed's Beige Book. The Beige Book told a tale of two economies, one that works in this or in any environment and one that really can't work, at least in this current landscape. Oh, the CBO (Congressional Budget Office)? Yeah, if you want to stay in a good mood, don't read anything with those three letters in the headline.

Though possibly smaller than first feared, the U.S. budget deficit for fiscal 2020, which ends in September (every service member knows we run out of training funds every September; ever run around the woods, yelling "bang, bang?") will likely hit $3.3 trillion, or the worst since the end of World War II. Interestingly, the total federal debt load is expected to surpass in dollar amounts the size of the U.S. economy in its entirety in fiscal 2021, and should the House and the Senate agree to something that the president can sign, this condition would exacerbate that situation... while rallying equity markets further.

What Was This, Then?

The fact that U.S. corporate bond issuances for calendar year 2020 are already a full-year record at $1.919 trillion? Good guess, and this is a supportive factor in the equity market trend, but not the reason for Wednesday's aggressive behavior.

It really is this simple. Market participants got aggressive and appetites broadened beyond the usual once news broke that the CDC (Centers for Disease Control and Prevention) had urged the governors of all U.S. states to remove or ease barriers (regulations such as building permits, etc.) for distribution sites to be used by McKesson Corp. (MCK) and its subsidiaries to distribute a Covid-19 vaccine once one becomes available.

The text, sent from CDC Director Dr. Robert Redfield to the governors, reads as such: "CDC urgently requests your assistance in expediting applications for these distribution facilities, and, if necessary, asks that you consider waiving requirements that would prevent these facilities from becoming fully operational by Nov. 1, 2020." Not that anything is promised, but this is the first time that anything resembling a hard date has been placed upon what I guess we would call a best-case scenario.

We know that an FDA (Food and Drug Administration) vaccine advisory committee will meet on Oct. 22 to discuss potential authorizations. We know that FDA Commissioner Stephen Hahn has been open about the possibility of an "Emergency Use Authorization" for a vaccine potentially being appropriate prior to the completion of Phase Three clinical trials.

I noticed the following at the Financial Times website Wednesday night. Apparently, the intelligence group known as "Ergo" has a Covid-19 task force chaired by former White House national security adviser H.R. McMaster. This group believes (if I am reading this correctly) that there is a 60% chance that at least one candidate will be proven to be both safe and effective, receiving an "Emergency Use Authorization" in between that Oct. 22 FDA meeting and Election Day on Nov. 3. Ergo adds that the federal government could distribute 10 million doses or more to population groups deemed as high priority by year's end.

That 28 out of 30 stocks comprising the Dow Jones Industrial Average closed in the green on Wednesday. The two that did not have been recent high-fliers: Apple and Salesforce.com (CRM) , both of which are holdings of Jim Cramer's Action Alerts PLUS charitable trust. I believe -- and I might be talking my own book or seeing what I want to see -- that the two stocks are sending different signals. 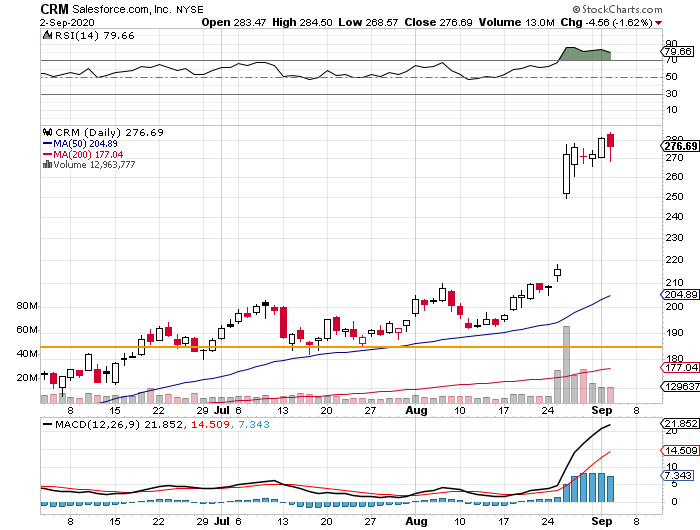 Readers will note that the range for Salesforce on Wednesday exceeded the range from the prior day, but that the Wednesday close was still higher than the Tuesday open. Salesforce sold off to the tune of 1.6% on Wednesday on still-elevated but decreasing volume. Yes, there is still a gap to fill, and the stock may very well do just that, but at this point I see a continuation pattern, and the trend is higher. 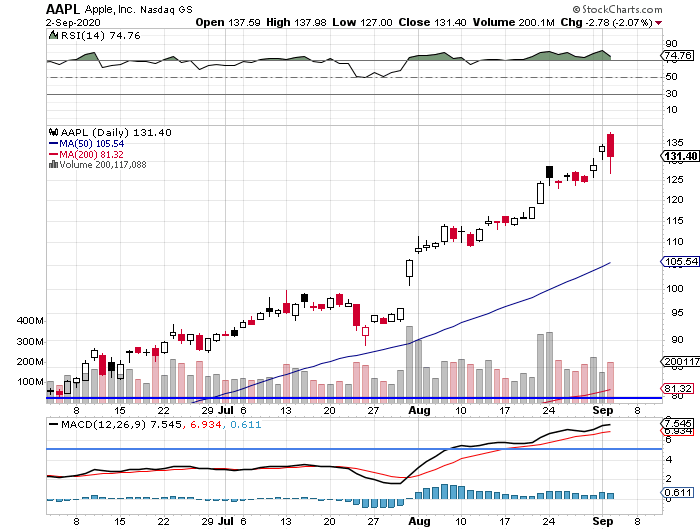 Now, Apple. The shares also traded in a wider range on Wednesday than on Tuesday. However, here both the open and close are wider than the day prior and obviously at -2%, in a different direction. This action also came on significantly increased trading volume. This is known in the world of technical analysis as an 'Outside Reversal Day." No guarantees in 2020, but this could be a warning.