The Wonder of It All

Advances in technology, and the ease that this brings in obtaining information precisely when needed have also brought about an increased level of intellectual laziness that allows the masses to exist in their own little cocoons. Word to the wise... you will not be able to turn your brains back on as if it were an electric light switch when one enters a room. Then again, why do I even tell you this? Obviously, though I preach, you are already here.

Markets are unsure. Of that, I am confident. After a week that saw a three-day rally sandwiched by weakness, I noticed something unattractive about our marketplace. Both the S&P 500 and the Nasdaq Composite, the two broadest measures that we have for general market health, had surrendered their 50-day SMAs (simple moving averages) on Friday, after regaining that level on Thursday. After three days mired below the mark. What does this mean to you and I? Well, the line had been loose support for equities in general since mid-January. The line is watched as closely by portfolio managers as any other, if not more. That's key technically, as well as sentimentally.

Retaking that line in the short-to-medium term would be a first step toward any continuity in the bull market for equities as the environment evolves. Are equity markets in a state of correction? The short answer would be "yes." Going into the weekend, the market focus had been placed squarely upon the trade war between the U.S. and China, I (and others) have warned for quite some time, that this "trade war" was really not very far at all from becoming a "cold war." Quite apparent to the casual observer is the weakness felt across eight of the S&P 500's 11 sector groups over the past five trading sessions. Where was there strength? Where else? Utilities, Real Estate and Staples. In other words, there was strength in playing defense. Strength in bond proxies.

Is a Cold War So Bad?

The truth is that as in all things, we as a people will adapt to any environment and move on. Of course, a negative environment around the relationship between two potential economic, not to mention military, super powers is a crucial impact in terms of simple economic growth, as well as corporate behavior. This will require a reworking of the way that resources are allocated, and of course also tamp down how rapidly these resources can be amassed.

The Wall Street Journal reported over the weekend that according to regulatory filings submitted by S&P 500 corporations through May 8 (about 71% of S&P 500 firms) there was a rapid deceleration in capital spending in the first quarter of 2019 on a year over year basis. Blame the trade war? Sure. One could also blame the on again/off again inversion of the yield curve.

As this condition is often seen as a harbinger of economic recession, that would be an overt cause for large-cap corporate America to reign in capital spending. That would also be an obvious answer to what nearly every sentient being who does pay attention saw as a policy error made by the FOMC back in December.

The Census Bureau will release their April data this Friday for Durable Goods Orders. As a subset within that data, Core Capital Goods Orders showed some life in March after lying dormant or even in contraction for an extended period of time. That line item may have to show a little more than the 0.3% m/m growth that is currently expected. The Atlanta Fed's current snapshot for Q2 GDP is running at 1.2%. That snapshot will not be revised again until a couple of hours after those Durable Goods numbers hit the tape on Friday.

Remember this. Fundamental analysis (earnings, primarily) tells you which way the bus is moving. Technical analysis tells you where the bus stops are. Monetary policy tells you if a ride on this particular bus is worth it at all (valuations) relative to other uses of personal time and treasure.

According to Investors' Business Daily, equipment spending by U.S. cloud computing vendors were not spared the rod in the first quarter. As progress is progress indeed, and this is where business execution as well as business storage are headed, one might be slow to run for the hills as an investor.

In other words, data usage should only continue to rise sharply. Internet of Things. Multi-media. e-commerce. Video gaming. Storage. My thought is that spending on the cloud may have slowed with the rest of corporate spending in general as the economy flirted, and still might be flirting, with a recession. That said, this is where pent-up demand will show it face first, and in some significance at that. This Charles Robbins? This is one corporate executive to watch.

does not play my song. Adobe (ADBE) has rocked. ServiceNow (NOW) has rocked. I am long both of those, and have mentioned this often. Splunk (SPLK) reports later this week. Workday (WDAY) , the week after. All four of these names are able to display impressive charts that lend one good technical reason to either be long or consider such a position.

There is another cloud name that I have liked very much, have given you often, and has not in the least showed the recent strength so obvious across the rest of this space. The fact is that the share price of Salesforce (CRM) has been mired in a flat base since February, and currently trades not only close to the bottom of that formation, but lower than it did late last September. Fact is in late April, as this name rallied into the high to mid $160s, I raised my own panic point for this name to $154. The last sale? $154.57. At the doorstep. After actually trading below the level at times last week. 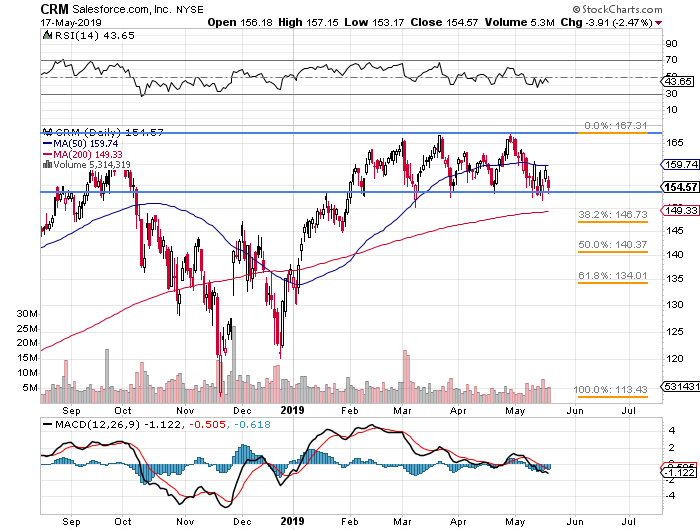 You all know my rule. Never fall in love with any stock? Why? Simple. Because no stock loves you back. Rules are rules, and there shall be no mercy. Stocks that fail shall be shown "Tarleton's Quarter." Should this name open below my spot, I have a net basis far lower than these levels, and those profits need to be protected. Do I sell my entire position? You all know my other rule. Incremental entry. Incremental exit. I will likely sell something, and then adjust my target price (currently unrealistic), as well as that panic point. Should somehow the spot hold, then I shall hold my fire as well.

Where The Chips May Fall

Okay, the cloud names have less exposure to China than most of the rest of the Information Technology sector. Last week, the Trump administration announced that there would be restrictions on what U.S. firms could sell Chinese telecom equipment network provider, Huawei, and what Huawei could sell here. Over the past few months, the heads of the various U.S. intelligence agencies have held a number of classified briefings with the leadership at a number of U.S. firms, notably technology firms to warn them on the pitfalls of doing business both in and with China.

Senator Marco Rubio, a Republican from Florida, according to the Financial Times facilitated these meetings along with Senator Mark Warner, a Democrat from Virginia. Rubio is quoted in that paper as having said, "The Chinese government and Communist party pose the greatest threat long-term threat to U.S. economic and national security. It's important that U.S. companies, universities, and trade organizations understand fully that threat."

By now, you know that Alphabet (GOOGL) has revoked Huawei's Android licence. Now, Huawei may only use the public, open source version of Android. That means no updates to either the system, or for security purposes, and potentially cripples the future success of Huawei's smartphone business. A number of semiconductor chip manufacturers have also had to cut ties to Huawei.

This is bad news for the industry group in terms of share price. This also will not help in reducing inventory levels at these firms, which impacts power of the point of sale in this highly cyclical industry. Look for continued weakness for Intel (INTC) , Qualcomm (QCOM) , Xilinx (XLNX) , Broadcom (AVGO) , STMicroelectronics (STM) , Nvidia (NVDA)  and Micron (MU) , as the whole group appears to remain highly susceptible to trade between the U.S. and China at least for the medium-term future.

Speaking of consumer electronics, this is a big deal for Apple (AAPL) . This may be the buying opportunity that some of you have been waiting on. I am not sure yet. Most of you know that I have a $240 price target on AAPL. Most of you don't know that my panic price for the name is currently $180.

Get an email alert each time I write an article for Real Money. Click the "+Follow" next to my byline to this article.
TAGS: Investing | Stocks | Semiconductors & Semiconductor Equipment | Software & Services | Technology