For Whom The Bell Tolls

Maybe for you? The closing bell, that is. I would not go so far as to call anything a trend just yet, but I think that traders may want to watch closely what has happened very late in regular trading sessions of late. Long ago, most traders (at least those considered sentient) pointed to the area between 2800 and 2825 for the S&P 500 as "the spot." Turns out that collectively... most of us were spot on.

Are we really that smart? Maybe the quants who write the algos that rule the marketplace have simply hired professional traders to read their charts for them. Self fulfilling prophecies? I will tell you this. Short-term trading levels have never been as accurate over the course of a career as they are now, in my humble opinion. So there is something there.

As the S&P 500 has found resistance above 2800 impossible to overcome both in Monday and Tuesday trading, the very late action has been something I find of interest. Last Thursday and Friday, as the index neared the 2800 level, the late-day algorithmic push had been to the upside. This week, as said index felt around for support above that level, the very same flush went to the downside. Is it tradeable? Not yet, but I'd pay attention on Wednesday as the index might be expected to open well below 2800, though I do write this morning note a good five to six hours ahead of the opening bell at 11 Wall Street.

Fifty Shades of Gray (Not Grey)

There are big, I mean big, reasons on the surface that would have investors net long this equity market in a significant way. Obviously, the seemingly optimistic era of trade war "Perestroika," or simply a functional, common sense, structural change in the way trade -- and thus competition -- move forward together in a new reality across the Pacific Ocean now permeates reason. At the surface, I think much of this positivity is priced in as February matures.

How much this positivity extends in a broad way toward the global community is almost impossible to correctly value at this time. We do see that copper has warmed. Then again, if a renewed pace of global growth were indeed imminent, would UBS have put the whammy on Caterpillar (CAT) on Tuesday?

That said, a quiet, and patient, domestic central bank would seem to be exactly what the doctor ordered as negative forces find their way into price discovery. Fortunately, barring a spike in consumer level inflation, that appears to be exactly what markets will get.

As market pricing has weighed dollar valuations against all global reserve currencies, it becomes obvious, at least to me, that the catalyst at this point for market direction will be in the translation of that value across the world of investment opportunity. Yes, a trade deal should relax upward pressure on the greenback. Still, the European economy is very soft, Brexit remains an uncertainty and Japanese economic growth has been negative in two of the last four quarters.

Now keep in mind that somewhere between 40% to 45% of S&P 500 earnings are derived outside of U.S. borders. Still with me? Go ahead, mentally factor in the truth that come Q1 earnings results, corporations will measure profitability against a flat comparison on corporate tax rates. That comparison, though very real in terms of margin, has presented investors with an artificial sense of just how well Corporate America was navigating the environment to their collective front.

Then there is our own domestic "macro blur," as certain numbers that seem inconsistent must co-exist as the housing market fades and retail sales appear to fall off of a cliff -- despite being in an environment where the consumer is gainfully employed while feeling ever-more confident. Confused? Likely you are.

Federal Reserve Chair Jerome Powell testified before the Senate Banking Committee on Tuesday. Powell will bring his dog and pony act before the House Finance Committee on Wednesday for more of the same. Forget whatever was said, or will be said by the politicians. It's what Powell says that matters, and what he says should explain even to the most aggressive hawks just why the central bank has taken a more hesitant approach toward the implementation of monetary policy. Right or wrong, that opinion really is neither here nor there. The fact is that the Fed had put a bottom to equity markets (not their mission) -- and hopefully to the weaker overall domestic macro condition when they changed tracks at the December policy meeting.

Powell conveys cognizance of slowing economic growth across both European and Asian economies, while also displaying an awareness that even domestically, there are "conflicting signals" displayed across an economic landscape that Powell sees otherwise as "healthy." My opinion is that the pace of tightening policy enforced by the central bank was far too aggressive in 2018. I am all for an appropriate price for credit over time. I am also fine with a smaller balance sheet. It became painfully obvious late last year that four increases for the Fed Funds Rate within one calendar year, coupled with a pace of $50 billion per month worth of quantitative tightening (balance sheet contraction) was simply too much too soon for this economy in this global condition.

Critics need to understand that the Fed was not wrong to change direction, the Fed was in fact too slow to react to the need for that change, and was lucky to have realized their error when they did, in fact. Liquidity remains a silent issue that will spring anew in our future conversations.

The day may come when manipulation of short-term rates becomes less of a tool and more of a necessity as a means to combat higher consumer-level inflation. So far, so good, thanks largely to suppressed energy prices that in no way can be relied upon. My expectation would be to watch until forced, which at least for the time being seems to be Powell's thinking. Powell does seem genuinely surprised by the resiliency of the labor force. Did no one think that a significantly stronger economy would draw the masses back toward participation? Seems like a no-brainer to me.

One last thing. Powell is also correct in his opinion on fiscal policy, when he uses the term "unsustainable path." When this becomes the primary focus for a crisis, I don't know. I do know that I have plenty of clean water and canned food in the garage, and a bit of gold in the portfolio. The day that the nation realizes this is a problem will be the day after the individual needed to already be prepared. That will also be the day that the central bank uses short-term interest rates as a means of self defense.

Close to flat the space. Who needs political risk from both sides of the aisle? Do I reflate these positions? Not here. Maybe if the pressure actually impacts pricing and forces related dividend yields higher.

Palo Alto Networks (PANW) . Wow. The firm crushed expectations for profit and revenue on significant growth not just for that revenue number, but also for operating margin. The firm also authorized a $1 billion share repurchase program. If not for that last iota of information, I had thought that at overnight prices closing in on $260 (+10%) the potential for a quick profit on the short side of the ledger had developed. I think we need to let this one open prior to taking that route -- and maybe see where resistance develops with all of the bright, happy faces in their correct places.

On that note, I did short Tuesday's runner Etsy (ETSY) late in the day. I had hoped to see some overnight profit taking that did not really develop from the long crowd. Right now, I'm running with a net basis of $69.24. My target had been $65, but I am not married to that spot. If this thing hangs around $68 and change in a weak tape, I'll take the lunch money and run.

Blaming a slow start to the firm's winter season, WTW put both profitability and revenue growth on a crash diet in the full-year 2019 guidance. My thought? If one is tempted, understand that this is one case that needs retail investors to understand Jim Cramer's three-day rule. The 200-day simple moving average closed at $64.74, for crying out loud. 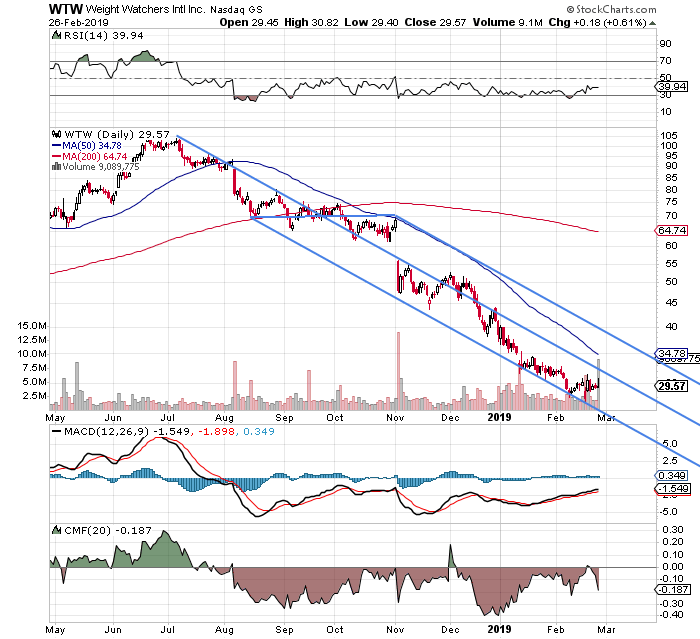 What an upside speculator might do (what I might do) is let the equity open. Let the analyst community cycle through their downgrades. Then maybe take a look at where July and October calls are trading to see if some kind of diagonal call spread might be put on for a credit. Only for a credit. Otherwise, we'll stick to a zero point plate of eggs.

Get an email alert each time I write an article for Real Money. Click the "+Follow" next to my byline to this article.
TAGS: Earnings | Economy | Federal Reserve | Investing | Options | Put Call | Stocks | Technical Analysis | Trading | World | U.S. Equity