Zero dark thirty. Wake up real early. Real slow. First the toes. Okay... nothing. Now, I'll move a foot, maybe a leg or an arm. Still real slow. If something crawled in this bag with me in order to warm itself, I certainly don't want to startle it.

I don't care who you are. If you have experience sleeping outside, you know the instant relief felt when one realizes that the worst case scenario of waking up with a new friend has not been realized. Now, we can throw on a jacket, a pair of boots, and maybe try to brush our teeth if the stuff in the canteen isn't too slushy.

On Thursday morning, equity markets felt their way around. They bought some. They sold some. All traders looked to see if there would be magnified carry over from late-day weakness on Wednesday inspired by the FOMC press conference that had left markets in a tough-looking short-term position, technically.

Markets did work their way lower, but with the exception of the energy sector and the underlying commodity that the group relies upon, the selling was really slow. Slow, but steady, as trading volumes ahead of "Jobs Day" remained mildly above trend.

My opinion, for now, would be this. The market has been awakened in terms of institutional participation. While that makes the snake more dangerous, that does not spell doom. That does not mean that a snake has crawled into your sleeping bag in order to escape the cold.

It does mean that as the macroeconomic situation develops, as the implementation of monetary policy remains non-committal, as the cross-border trade condition remains up in the air and as the political climate remains quite bazaar, we're going to have to learn to move carefully as we rise. Don't use the word "uncertainty." I mean you can, I just think that the market has been uncertain about something since I got here. That was before some of you were born.

Undoubtedly, once the Bureau of Labor Statistics releases April employment data, dollar valuations, yields, equity index futures and then ultimately equities themselves will move around. The most important single slice of data released this morning will be the year-over-year print for wage growth. We know that Fed Chair Jerome Powell sees the forces behind slower core inflation as potentially transitory. He does not know. He has plainly told us this. Patience on policy therefore is the correct approach. One must keep in mind that in theory, the Phillips Curve should work, so the academic economists that Powell relies upon remain slow to understand the impact of automation on inflation. This is a process.

That all said, in my opinion, demand for labor is best illustrated at the cross-section of wage growth and average weekly hours. You see a slight uptick in pay to 3.3% y/y in a month where the workweek holds steady at 34.5 hours, and that's a strong month. The headline unemployment rate is far less important to focus on, as factors such as participation and part-time employment often produce a misleading result there.

Job creation remains a key focus for the financial media. Therefore, the headline nonfarm payroll number will produce the algorithmic response that markets initially dance to. Obviously not the focus this late in the cycle in terms of economic health, we are forced to place a heightened level of awareness on that number.

Through three months, the seasonally adjusted NFP print is averaging 180,000 per month, that's strong, but not quite as strong as the 230,000 per month that the ADP print for private sector jobs creation is averaging through four months.

Though the BLS and ADP can diverge wildly from month to month, it is my opinion, and not scientific fact, that over a longer timeframe the two numbers tend to draw toward each other. For example, the averages between the two reports for the entire calendar year of 2018 only landed a rough 2,000 apart. That is not really that uncommon.

This leads me to believe that either the BLS number will start to skew higher or the ADP number will start to skew lower. Again, this is just my opinion, but I trust the ADP number from month to month a little more than the BLS, as it is produced by actual data and not survey results, and appears to be less volatile in the short term to the naked eye.

Rising inventories. On Wednesday, the Energy Information Administration reported an inventory build of nearly 10 million barrels for WTI Crude. This was fifth week in six that the agency reported a build, and the third week in four that the build was absurdly large. At least in my view.

Strictly enforced sanctions on Iran? The ongoing disaster in Venezuela? Well, that's why oil futures ran wild over the past few weeks. However, U.S. inventories stand at their highest levels since September. September of 2017, that is.

Fears of constricted supplies have been sated by U.S. production that ramps ever higher, as well as an impatient Russia that has been producing above trend. Does OPEC extend the deal that the former cartel and their cooperating non-OPEC producers had implemented this past June? This really depends on the need to create cash flow. If Russia pulls away from this deal in June, the game will become that much more competitive.

As a trader, I see the $62 level as a swinging gate for WTI Crude. You'll notice that for most of Thursday, that level acted as resistance for June futures. Should that resistance hold, there is no reason that WTI can't trade as low as $57. Re-taken, well, we've seen the product run to $66, but I would not hold my breath.

As for the oil stocks that I hold, there are still profits to be taken. Royal Dutch Shell (RDS.A) bucked the negative trend on Thursday after announcing the latest tranche of the firm's share repurchase program. The reason that I like holding that name, as well as British Petroleum (BP) , Chevron (CVX) (Back in that one recently, so not profitable on this tranche.. I don't want to lie to you) and ExxonMobil (XOM) , is their dividend yields.

You can do whatever you need to, but I don't mind hanging onto several large-cap exploration and production operations as long as the allocation remains in proper proportion to the rest of my book. They do pay the investor something decent just for hanging around, and they do not cut the investor off from the benefits of economic growth -- which is the case with many dividend payers. Investors can create a separate book, or even a separate account, for their "dividend portfolio" if that's what it takes to compartmentalize. It's also okay to trade these names short-term if one finds that this type of activity suits their skill set.

Apparently, our friends at Berkshire Hathaway (BRK.A) , (BRK.B) have been building a position. A long position. In Amazon (AMZN) . In a Thursday interview at CNBC, ahead of the firm's annual shareholder meeting, Warren Buffett was quoted as saying "One of the fellows in the office that manage(s) money.. bought some Amazon, so it will show up in the 13F." Buffett added that he has been a fan of the stock, considering himself an idiot for not buying it.

I don't think anyone here considers Mr. Buffett an idiot. Answered the wrong phone once, and spoke to him by accident. Years ago. That's the whole story. Speaking as an investor long that name who has also long been a fan... Welcome aboard. Very glad to have you.

Maybe the ninth. Does Pluto still not count? Those who follow closely know that Planet Fitness (PLNT) has been a holding for some time now. A great holding. Those who followed me into the name back in December probably felt good about being up 51% on that holding to this point. "Judgement free zone?" The shares got hit in the teeth last night. Here's what happened.

For the first quarter, the firm printed adjusted EPS of $0.35. That beat by a penny. Revenue, even at year-over-year growth of 22.7%, printed light of consensus. Same-store sales ran 10.2%, which in retail, if you consider this retail, and I kind of do, is considered hitting the cover off of the ball.

Going over the consolidated balance sheet, as well the statement of cash flows, I don't see anything scary that wasn't already there. I don't like the debt level versus the cash position, but those numbers have been stable. The firm remains more than able to meet all short-to-medium-term obligations.

I think perhaps the negative overnight reaction is simply the result of the firm maturing somewhat. Though still executing very well in my opinion, this is the third straight quarter of decelerating earnings growth on the second quarter in a row of slower increases in revenue. The stock behaved like this last quarter, and then proceeded onward. The firm guides toward 15% revenue growth for the year on same-store sales in the high single digits. That guidance is unchanged.

The danger now becomes the multiple. At 39x forward-looking earnings, PLNT is priced like a growth stock, which was appropriate in this climate. That status may have been dented. 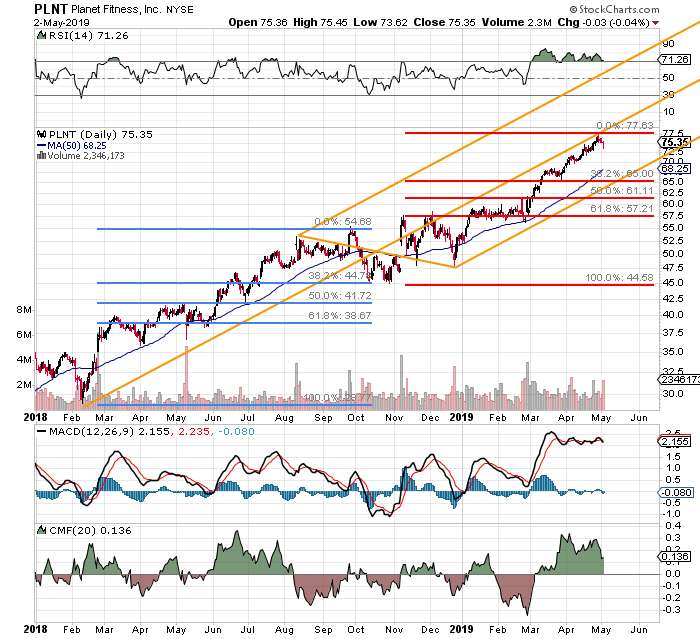 As one can plainly see, the lower trend line of our Pitchfork comes into play close to the 50-day simple moving average at the $68 level. That spot was tested overnight, and held.

Let's see what happens Friday morning. We have a significant profit to protect here. The name presents as overbought at last night's closing price. I am not going to sell on the knee-jerk, but you can bet your silly tail that if this thing cracks the 50-day line, I am history. Rock on.

Note: Market Recon will not publish next week as your pal Sarge is taking a little time off.

Get an email alert each time I write an article for Real Money. Click the "+Follow" next to my byline to this article.
TAGS: Earnings | Economy | Fundamental Analysis | Investing | Markets | Stocks | Technical Analysis | U.S. Equity