Swing low. Carry me home? First, we've got work to do. You're nervous? Of course you are. Always something you can do to take the heat off. Take a second. Take two. Still healthy? Somebody loves you? Of course. There is light. Emanating from the open window. Always will be. Fear is only for the wicked. The wicked shall fear us. Now, top off on water. Change your socks. Let's move.

Worried about recapturing paper gains now seemingly lost? Don't waste your time. You did not get the bottom. Why would you expect to get the top? Recent highs may or may not be the top. You won't know, and I won't know until we know.

The Nasdaq Composite gave up nearly 1.5% on Monday, as that index and the S&P 500 (easily the two broadest, and thus most important, measures of large-cap health) fell significantly further away from their respective 50-day simple moving averages. The bright side? Trading volume was significantly lower at the Nasdaq than it was at the New York Stock Exchange -- and for shares listed at either exchange, volume fell sharply from where it has landed on other recent down days for the indices.

Is that meaningful to us? I think this could either mean a noticeable retreat from institutional participation, or that the carnage was primarily local. By local, I mean confined to a smaller group.

Hence, the lion's share of Monday's Whack-A-Mole session landed on the Information Technology sector, and within that larger group, upon the semiconductor manufacturers and those who supply equipment to them. The Philadelphia Semiconductor Index (SOX) was routed for the day to the tune of more than 4%. 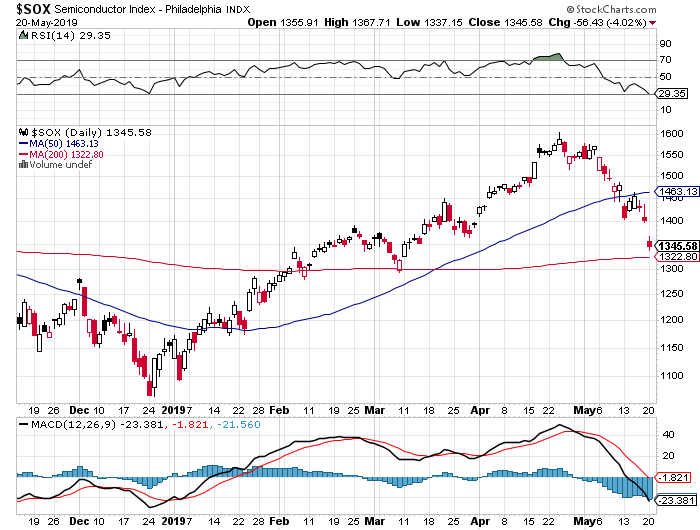 As you can clearly see for yourself, this index finished the day in an oversold state, and with its own 200-day SMA within sight. If they manage to crack that 200-day line, portfolio managers could be forced by their risk managers to further downsize long positions across the space. That, we don't want. There will almost certainly be some effort to rally this group this morning. Here's why.

Now, suddenly, hours after a wrecking ball rolled through the semis, it is being said that the U.S. Commerce Department will grant a temporary license for U.S. exports to China's Huawei. This order is expected to reach publication by Wednesday of this week. Many firms had already taken action in order to comply with last week's ban against doing business with firms seen as a potential threat to U.S. national security. The ban targeted Huawei and ZTE primarily.

Firms such as Alphabet (GOOGL) , Xilinx (XLNX) , Qualcomm (QCOM) , Germany's Infineon (IFNNY) , and Lumentum (LITE) had all taken actions toward compliance. In fact, Lumentum even changed forward-looking guidance for both revenue generation as well as profitability.

Wilbur Ross, Secretary of Commerce, spoke on the matter. He was quoted in the Wall Street Journal as saying, "The temporary General License grants operators time to make other arrangements and the Department space to determine the appropriate long-term measures for Americans and foreign telecommunications providers that currently rely on Huawei equipment for critical services."

Bottom line? In my opinion, as in all negotiation, the initial step is meant to create shock and awe. Time will tell if every twist is part of the ongoing attempt to reach a trade deal -- or if, as I suspect, we are still in the early stages of what might end up as a protracted cold war. Within 90 days, we will either see further loosening of this ban, or perhaps increased sales of F-16 fighter aircraft to Taiwan's military. It is hard to say right now. Either way, we play the field in front of us, gang. We identify. We adapt. We overcome. Might be a good time to choke up on the bat, and simply try to hit for singles. Worry about driving in runs later.

Ahh, the circus. Who can forget the clown car? Smallish import pulls up in front of the crowd. Unbeknownst to the children in the audience, the car has pulled over a trap door. An incredible number of clowns pour out of the car one by one. We, in the business of economics, have our own version of the clown car. There comes a week, usually about a month ahead of a policy meeting, usually with a holiday weekend beckoning, where high-ranking central bankers make sure they get out and about, trying to be visible. This is that week.

The jugglers and the plate spinners took to the stage on Monday, as four Fed officials opined publicly on a number of financial matters. Three more speeches today, five tomorrow. Another four on Thursday. Then, miraculously... no scheduled appearances for this Friday, ahead of a three-day weekend. Funny how that happens. The leader of this crew spoke last night, on corporate debt. Thought you should be in the know.

Fed Chair Jerome Powell was quite frank in his delivery on Monday night. He stated that regulators are trying to better understand the risks created by corporate leveraged debt. He stated that the levels now reached should give investors "reason to pause." Powell imagines that a downturn in the economy could impose severe strains on some U.S. businesses. (Never would have thought of that one on my own. Nice work, Detective.)

Powell said this: "Most importantly, the financial system today appears strong enough to handle potential business sector losses, which was manifestly not the case a decade ago, with subprime mortgages." While trying to sound confident, Powell's address reads as if delivered by someone who just does not know. That's not as bad as it sounds, and actually hits me as somewhat refreshing, as perhaps that reality manifests in an ability to evolve when needed.

The overconfidence of the Fed Chair prior to the financial crisis of a decade ago certainly did not help matters once pieces started moving in the wrong direction. The difference was THAT Fed Chair did not understand that he did not understand. That hurt a lot of people.

In the U.S., mergers need the approval of both the Federal Communications Commission (FCC) and the Department of Justice (DOJ) in order to move forward. On Monday, FCC Chair Ajit Pai indicated that he was on the path toward approving the deal between T-Mobile (TMUS) , and Sprint (S) . It is somewhat unusual for the FCC to opine like this ahead of the DOJ, as the two agencies must weigh their potential approvals against different criteria. For the FCC, the measuring stick is whether or not a deal serves the public interest. At the DOJ, the preservation of competition is what is important.

It appears that approval from the DOJ will be a tougher nut to crack, as T-Mobile and Sprint are the nation's third- and fourth-largest wireless telecom providers, following both Verizon Communications (VZ) , and AT&T (T) . Along with the primary players here, those two names (I am long both) also rallied, as perhaps there might be a case for decreased competition across the space.

Why would the FCC Chair come out on such a matter ahead his colleagues at the DOJ? Yes, Sprint has agreed to sell the Boost Mobile brand (a prepaid cellphone service with 7 million customers). That helps.

Perhaps it was this. The two companies have agreed to invest in new wireless broadband service in rural areas, and to build out new infrastructure for 5G service by way of Sprint's licence in the mid-band of the radio spectrum. In other words, they have promised to try to be beef up where it is that Huawei has been involved.

Does this have anything to do with our brewing cold war?

I really don't know. What I do know is that markets adapt. Should Huawei end up in or out of the game, others adapt to fill needs. This is the primary reason for my longs in Verizon and AT&T. That, and their gargantuan dividend yields.