They came from all over the Emerald Isle. They used outdated muskets first issued in 1842. Against massed bored rifle fire. In December of 1862, the 1600 men of the U.S. Army's famed "Irish Brigade", against all odds assaulted the Confederate position in front of Marye's Heights at Fredericksburg, Maryland. Infinite valor in the face of a withering enemy fire. In defense of their new country. In defense of freedom.

They kept coming, no matter how many fell. It was here that General Robert E. Lee referred to the lead regiment as "The Fighting 69th." It was here that even though only 256 of those men would leave the field in one piece, that all 1600 would end up living forever. I am starting to weep now, so let's get to where I was going with this in the first place.

The S&P 500 hit resistance in the same spot three times on Wednesday. That last attempt at glory failed at 14:30. Enter Fed Chair Jerome Powell. This is not a knock against Jerome Powell. His patience here is understandable. Powell seems to believe that low consumer level inflation pervasive across the economy might be "transitory." Every e-mail that I answered for the financial media last night included that word. There is no doubt that statistically speaking, our most commonly used measuring sticks for inflation have all worked their way lower over the past year, despite tighter labor conditions that come complete with more robust wage growth than the nation has seen in a dog's age.

There is no doubt that under the leadership of both Ben Bernanke and Janet Yellen, there was a profound level of failure to produce either the inflation sought or sustained economic growth beyond what would be termed as barely minimal. Jerome Powell sees, in real time, this suppression of inflation as transitory, or what has caused it as possibly temporary in nature. So did both of those predecessors, even as the word persistent would have been a better vocabulary choice for the two of them in those years.

The fact is that financial markets are one day off of record highs. Economic growth is less than a week off of a remarkably stronger print than anyone saw coming. Some numbers are showing weakness. ISM Manufacturing for April showed a slower pace of growth for both New Orders and Production on a flat print (No increase, no decrease) for Prices. Commodities were hit with the "ugly stick" in response. or maybe that was the 9 million barrel build in oil inventories.

Satisfied that maybe Powell had simply misspoken, I made my way home from the City of New York on Wednesday. I pass my local gas station. What's that? A $3 handle. For the cheap stuff. Hmm. That's new all the way out by me. Wife has a migraine, asked me to pick up two slices of pizza on my way home. Only thing she can hold down on migraine days.

"Yeah, I've been taking a hit, Sarge. Finally had to try to raise prices."

"Actually, Joe... I have been expecting this for a while. Good luck."

The Fed did trim the interest rate paid on banker's excess reserves to 2.35%. Clearly, this was meant to correct a minute, accidental 5 basis point hike made earlier this year. Not a policy move. Though that incorrectly interpreted dovish signal was probably the reason that stocks ran higher in the half hour in between the FOMC policy statement and the press conference. Powell did say, when he took the podium, that he expects core inflation to be able to regain target without a rate cut. We all well know that at least one rate cut at some point in 2019 had started to be priced in.

Markets had to try to now price that probability out to some degree. Suddenly, the U.S. 10-year note yields 2.53%, up from a low of 2.45% less than 24 hours ago, and that's not a bad thing. The U.S. Dollar Index showed some renewed strength in response to the press conference, and at these levels, I guess there is no way to sugar coat that. That's a bad thing for large-caps stocks and commodity pricing.

You all know that I look at a lot of charts. You know that I feel to truly be successful at this job, one has to put in enough work to understand both balance sheets, as well as the basics of technical analysis. Think of our journey as a bus trip. Fundamental analysis will direct where the bus is ultimately headed. Technical analysis tells you where the bus stops are. For the major indices, Wednesday offered up a horrendous looking candle. I've blown it up, and left out all of our usual overlays, in order to make this clear. Take a look.

What you see before you is dangerous, and unfortunately at least somewhat reliable in the short-term. I call this a "Two-Day Bearish Engulfing Reversal." Some professionals also call this a Bearish Outside Reversal. What it is in plain speak for those who might do something else occupationally, is a down day that comes after an up day, where for the second day, the high is higher than on day one and the low is also lower than on day one, and that's where the second day ends. In short, the bears took control of the session away from the bulls decisively, and their momentum kept up into the bell.

Some saving grace would be that in this example for the S&P 500, trading volume was lower on day two. Now, bravely take a look at this.

As far as the Nasdaq Composite is concerned, we still have the bearish two-day pattern, but with higher volume. Obviously, when traders look to preserve capital, they often look to realize profits where profits are most overt. This would be a day of higher distribution for tech names. My guess, educated by more than a thousand years in the business, suggests that the marketplace at least on Wednesday afternoon encountered higher institutional participation.

Does this mean that I panic, and run for the hills? Of course not. I still think multiples for equities will end the higher than they are now. It does mean that maybe my weapon is off "safe." Perhaps, I reduce highly profitable positions where I'm not sure they were deserved in the first pace. Perhaps, I hunt as other names long coveted move into range. We are never sure of outcome. The more we understand, the more we can impact the probability of our own success. Fix bayonets.

I am not a materialistic man in the least. No need. I neither covet my neighbors' goods, nor their wives. I do however like to be challenged, personally. I want to run faster. Be stronger. Endure. The main reason I think that I like extracting a living from the marketplace without having to sell financial services to the public, is that it is quite difficult.

The game afoot requires so much effort in the way of learning, patience, decisiveness, all the while trying to completely eliminate all human emotional response. Without fail, there are swings and misses. There are missed buy signals, missed sell signals. Too many positions. Too little diversity. One of these conditions grows insignificant while correcting another.

In short, this sport is awesome. Sometimes, a trader such as your pal likes a name, even pens articles proclaiming that fact... yet never pulls the trigger. Yes, I do covet better performance. I do covet a few names that got away. I have long liked, and coveted Twilio (TWLO) .

This cloud communications business reported on Wednesday morning. The stock had already run roughly 200% over a year. Seems that as the business cloud expands, there is clearly a need for the ability to embed voice, text and video anywhere and everywhere. That's what Twilio is good at.

The firm reported an adjusted first-quarter profit that beat expectations. The firm also beat revenue expectations while putting together 80% growth. Gee whiz. Better than that, the firm raised 2019 guidance, pulling the low end of expected ranges for both EPS and revenue above previous consensus view. In other words... Huzzah.

At first, traders bought the stock -- and then they sold it. Did they ever. 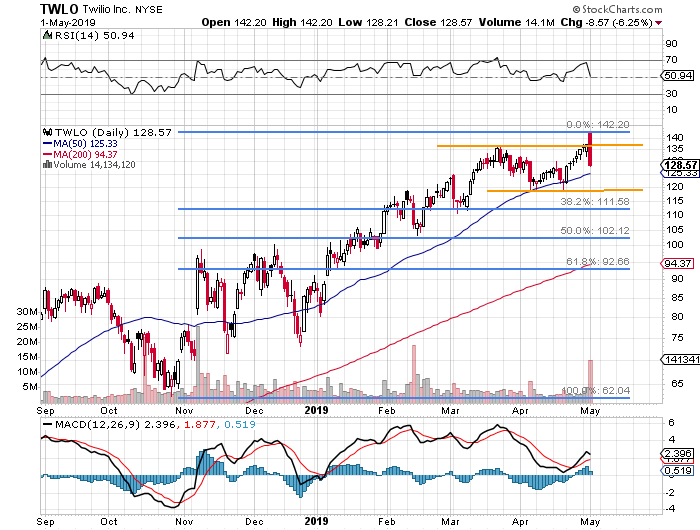 Talk about a bearish engulfing reversal. Gee willickers. The shares were rebounding slightly overnight. Am I scared off by the fact that those shares still trade at a skillion times forward-looking earnings? That does give me reason for pause, to be honest, though I long ago made allowances for growth-style tech.

What I see is a failure to break out on positive news, coming out of a Flat Base (yellow lines). Had the breakout been sustained, I think the $160s could have been targeted. Now, however, the area that needs to be taken and held, presents distantly at $136.

My thought is this. I can go get some of these, but I definitely want to see if Wednesday night's low is tested on Thursday. I think it might be. The 50-day simple moving average is now around $125. Look how well the stock has performed whenever that line has been tested. Funds own 45% of this firm. They are watching that line too.

It is likely that I will wait, and when the last sale meets that blue line, I'll buy small. I'll preserve my dry powder to observe what the big kids do there. If they buy it, I'll have a small trade on my hands. If they puke it, I'll drop down to the Fib level around $111 to grab substantially more. Of course, this is in a perfect world where the Mets win the pennant this year and friendly elves show up to mow my lawn once a week. Eye on Twilio.

Get an email alert each time I write an article for Real Money. Click the "+Follow" next to my byline to this article.
TAGS: Earnings | Economic Data | Economy | Federal Reserve | Fundamental Analysis | Investing | Markets | Stocks | Technical Analysis | Trading | U.S. Equity