Most eyes will be on Nvidia (NVDA) Thursday evening. The chip maker reports quarterly earnings after the bell.

The stock has been on a tear, doubling off the March lows in only two months. With the shares trading around all-time highs, it's fair to say optimism is high going into the quarterly report.

The Action Alerts PLUS holding has been a benefactor from shelter-in-place during the current Covid-19 pandemic. From a surge in gaming to the added need for datacenters as work-from-home takes a grip on the economy, there are valid reasons to be optimistic.

The Nintendo Switch has been sold out in many places around the country during the recent months, which bodes well for Nvidia. Also, the company has finally been able to close its deal with Mellanox and begin to reap the benefits of the purchase. On the datacenter side, this should be a big plus.

Nvidia shares are pricing in a move around 7.25% by the close of trading Friday. That trends toward the very high end of moves over the past two years. The 20% move from a year-and-a-half ago is the big outlier. That may have numbered skewed a bit.

Without the outlier, selling put spread (i.e., bullish put spreads) would be the heavy favorite in terms of a strategy going into earnings based on historical context. Even with the outlier, I'd still put it at the top of the heap, because with any earnings strategy, you can anticipate a lower move one out of every eight times. That shouldn't sway you unless you are dealing with an unlimited loss approach. Then you need to weigh the possibility if that one time wrong can wipe you out.

I don't have any magical insight into Nvidia into earnings. This company is so heavily followed and discussed there are no secrets.

We'll want to watch the market reaction. The options market has a floor around $330 and ceiling around $380. I believe if the stock gets over $380, then $400 will become like a magnet.

The recent breakout move higher came from the $325 area, so I do expect $325 to $330 to hold if the report disappoints. Should we break below $325, then I would target $300 to $305 as a possible landing point for the stock. That may feel like a mile away, but the shares were there just a few weeks ago. 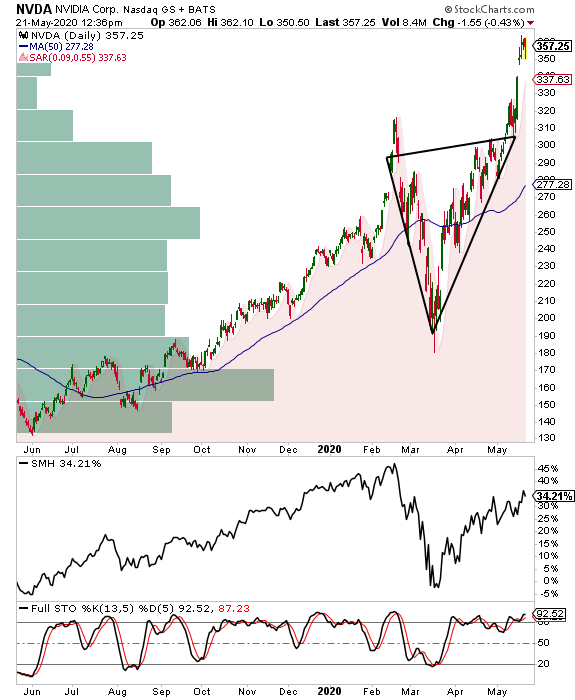 Nvidia's daily chart, above, shows just how strong it has been over the past year, especially as of late. This is the biggest breakaway from the 50-day simple moving average we've seen over the past year. The price pattern matches the shape of the larger semiconductor index, but that could be Nvidia dragging the index more than the index leading Nvidia.

After the large run, I'll take a watch-and-wait approach with the above levels as to where I might look for a buying or shorting opportunity. Given the almost-cult-like nature of this stock, I'm inclined to search only for a long entry as cult stocks are impossibly hard to short until the cult gives up hope.

One thing we do know, Nvidia is one to watch after the bell on Thursday.

Get an email alert each time I write an article for Real Money. Click the "+Follow" next to my byline to this article.
TAGS: Earnings | Investing | Markets | Stocks | Technical Analysis | Trading | Semiconductors & Semiconductor Equipment | Earnings Preview | Coronavirus