I know this is anecdotal, but it seems that most people fall into one of two categories regarding the market now. The first is that we saw capitulation last week and we should rally and come back down for a retest. The other is that there is more to go on the downside. Oh, I'm certain there are variations on the theme, but the one thing I haven't seen is anyone who thinks we can have a "V" bottom.

Sure, the contrarian in me has a little voice in the back of my head that is screaming if no one thinks it we will have a "V" bottom. But the analyst who has been doing this for nearly four decades says retests are the most common scenario.

Was last Thursday a low? It was "a" low. Maybe. Was it "the" low? If we use the chart from 2010, once again, we would have to say, no. You see, first of all, we haven't even seen two consecutive up days since this rout began, so we would need to start with that before we could say much more with any confidence. Once we have a rally that lasts longer than a few days, almost every market with a waterfall decline has come back down after such a rally. In 2010 we made a lower low. In 2010 we made several lower lows.

What we did see late last week was the Overbought/Oversold Oscillator did not make a lower low on Thursday's decline and finally lifted itself up on Friday. Enough that you can see it on the chart. This is the first such oversold rally on that chart because prior to this the Oscillator hasn't even blipped up.

The extreme number of stocks making new lows on Thursday -should it be the peak reading-should typically be tested. Keep in mind that when we see numbers like that they are typically retested several times. Last week I used the example of 2008 where we saw the peak reading for new lows in October but the market did not make its low until March of 2009. However the Hi-Lo Indicator with a reading at 2% is oversold. This indicator typically double taps (or retests).

Sentiment-wise, the equity put/call ratio has been over 100% for three straight days, which is unusual; it has taken the 10-day moving average up to a very high level. The 30-day moving average of this metric is not yet showing extremes though. That typically comes on the retest. 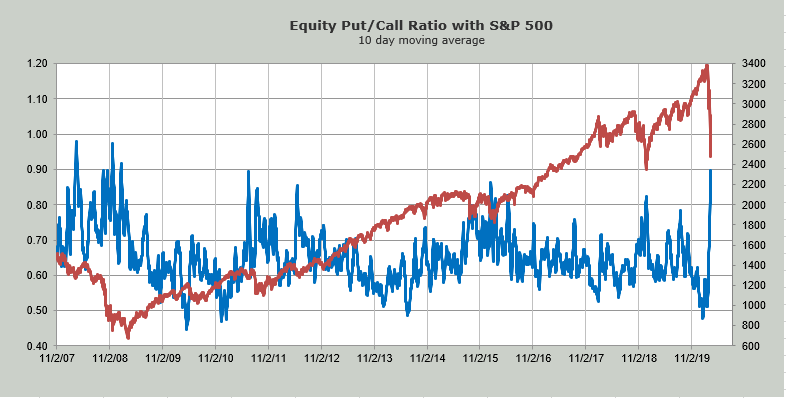 The Citi Panic/Euphoria Model continues to confound so many by not showing up in Panic. It takes a long time to get there, especially when it starts from such a high level of Euphoria. Keep in mind how Euphoric things felt in December yet the indicator did not cross over the line until late January/early February, which was when the market finally peaked. The Panic reading tends to come much later in the process.

I will finish with an anecdotal sentiment comment on the market. My mother, who thus far had not asked about the market in the rout, finally did ask Thursday evening. Sure, everyone says they have their parent, who is their tell, but long-time readers will know that my mother's timing has a tendency to be uncanny.

Most major indexes filled the Thursday morning gap on Friday afternoon's rally, so no one should be surprised if we give up some of Friday's gains. I do not expect volatility to go away.

Let's turn to a chart of the Sentiment Cycle and compare it to the chart of the yield on the 10-year note, since I think it lines up rather well.

Point "A" is returning confidence. Point "B" is buy the dip. "C" is enthusiasm. "D" is disbelief. "E" might be Panic and therefore "F" might be Discouragement. Note that even after Discouragement, there is a long process of ups and downs, maybe even lower lows, but perhaps last week was that point on bond yields. 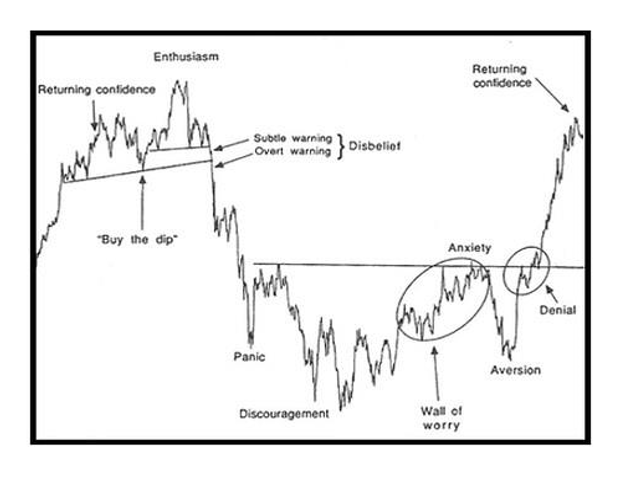 The maker of beer, wine and spirits could ignore its bearish clues and follow the broad market higher here on Monday.