Zero Dark Thirty. I sit. I stare out my office window. The only thing staring back at this time of day/night is the blurry image of a guy who kind of looks just like me. A bit older, perhaps. I think about economics, business and the financial markets. That's what I do. In addition, I think about everything else, first because I am a human being, and I care. Second, because what is economics, in its purest state, if not the expression of human response to conditions of both surplus and scarcity through the lens of demand, and then influenced through policy?

In short, for traders, it is still all about price and capital flows. These capital flows may seem silent in real time, but become clearly visible to anyone willing to seek answers to questions just by watching two simple outputs. Price and trading volume.

In this column, I have expressed an increased level of caution this week. As an experienced investor, I see the various potential for market negatives. Almost too many to count. China. The coronavirus. Social unrest. Unemployment. The coming rounds of defaults and/or bankruptcies. The coronavirus. I mention that one twice, because that one is the enemy and too many folks who maybe have not been impacted closely or directly don't know enough to not underestimate this enemy.

I have also written repeatedly about the need for traders to respect price. To respect these capital flows. To remain flexible, as these flows are far more powerful than the simple ability to measure risk in an environment not relevant to anything experienced across a long career. No matter how long that career might be.

Such respect for price is what protects traders from themselves in these times. The man looking out that window has been through quite a bit over the years. More than most. He is cautious. He has also learned to survive the marketplace, not to mention life itself, through reliance upon a code of discipline that in itself belongs in the realm of the ancients. The blurry image staring back knows. He knows the answers sought. Every major U.S. equity index turned in March, and by early April, all had confirmed for us the change in trend.

We were spot on then. Though there is now significant reason to doubt, fundamentally, there has only a few times since been an initial sell signal sent. And at no time have we seen anything close to a confirmation of change in trend. What we see now is a rotation into value and out of cash. Not, for the most part, out of the market's post-March collapsed leadership groupings. Those groups have moved sideways-to-slightly-higher as the most severely beaten groups have surged. These later-stage rallies have been about broadening market performance. If I could only show the deep wisdom of that man in the window. So thoughtful. Unfortunately, he disappears every day as the sun rises.

Wednesday. No doubt about it. Gains made at this point by the Nasdaq 100 and Nasdaq Composite that would have been just fine not so long ago, now seem quite pedestrian. That is when compared to the transports, or the small-caps. The Nasdaq Composite has actually started to slow its ascent just 1.3% away from making a new all-time high. While one cannot really say that the more tech-centric indices are now in stall speed, the above-mentioned capital flows, supported by increased and easier money supply, has chased the Industrials, the Financials, Materials and Energy.

Perhaps even more key to this "growth-themed" risk-on move has been the weakness seen -- in particular at the longer end of the U.S. Treasury yield curve -- as the U.S. dollar appears to have found a new level (a lower level) relative to peer currencies over recent days/weeks. Are these moves a clear sign that debt markets are prepping for increased supply at the longer end of the curve as the Treasury Department borrows much more and the Federal Reserve adjusts average balance sheet maturities? Probably.

There are also some signs that while economic growth may come slow, and the depth of economic contraction has been deep, the level where the economy seems to stabilize may show up somewhere above where economists had thought prior.

This week's market action had been led, to some degree, from abroad. European stimulus. OPEC/OPEC Plus. While there are early indications of some Thursday morning disappointment on these fronts (I am a few hours ahead of the ECB here), traders who did find reason for optimism in the May ADP Employment Report need to understand that though this far less severe contraction in private payrolls than projected was a positive, the ADP and BLS count unemployed persons differently. The ADP does not recognize furloughed employees as unemployed, while the BLS does. At least that's how I read it. The ADP includes any active employee within a company as employed, while the BLS only counts employees who were paid during the survey month. What that means for this Friday, we'll leave for this Friday.

The story did not garner all that much attention. I saw it in early afternoon. On Wednesday, the Federal Reserve Bank announced that it would again expand the number of local governments from whom it will purchase debt as the forthcoming plan to lend on the local level takes shape. The long trail of broken budgets at all levels of government is well known, as the impacts of both the pandemic and now the social distress in some of the already most impacted areas both increase public expense as well as delay economic recovery.

The Fed will permit all fifty states to designate two cities or counties not already accounted for to be able to issue debt to be sold to the central bank. This is the same program you read about earlier in this financial crisis meant to make credit available to those 50 states, to the District of Columbia, and to each city with a population greater than 250K as well as each county of 500K or more. This move will increase the number of total eligible issuers from 261 to 361, and should at least help stave off the immediate budget issues faced at the local level. The Fed expects to make up to $500B available to this program.

Vaccines for the Covid-19 disease that is caused by the coronavirus SARS-CoV-2 are on the way. It would seem. The Trump administration has chosen five vaccines among the many under development to focus on as the plan remains getting a large number of doses out to the public prior to year's end. All five will have the ability to access increased financial support as they advance their vaccine candidates.

The chosen five, at this time, would be those vaccine being developed at Moderna (MRNA) ... already in Phase 2, AstraZeneca (AZN) ... working with Oxford University, Johnson & Johnson (JNJ) ... yet to enter Phase 1, Merck (MRK) ... doing it the old-fashioned way, and Pfizer (PFE) ... thinking size and scale this year. We wish them all well.

Former Sarge fave (it's been a while), KLA Corp (KLAC) snuck over the goal line on Wednesday. Hmm, actually, it's been so long since this one was on my radar, I believe the firm was known as KLA-Tencor at that time. Been a couple of years. Well, to make it short, this one is at a crucial point on Thursday morning. 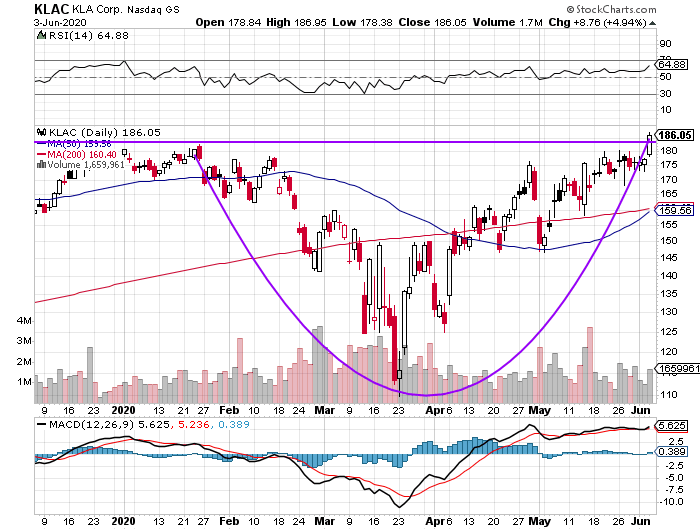 Readers will note that shares of KLAC have completed a four-month cup formation, passing the peak created at the left side of the cup on Wednesday. Can it hold? The very early tape is weakish. Why expect resistance? One, cups do not always, but often do, develop handles. When this happens, the pivot point shifts from the left side of the cup to the right side (New kids, you need to remember that. Write that down.)

Why might the shares pop from here? Relative Strength is very solid, but not yet overbought. In addition, the 50-day SMA at $159.56 appears set up to pass over the 200-day SMA at $160.40. Should this occur, this is what is known as a "golden cross" and is no sure thing, but can certainly cause an algorithmic reaction if you catch it on the right day. Basically, I am telling you that I expect to see a fight over this name today. Should the shares find support above $184.50, and the economy not go off of the rails, this stock can move well beyond the $200 level. Just an opinion.

Get an email alert each time I write an article for Real Money. Click the "+Follow" next to my byline to this article.
TAGS: Economy | Federal Reserve | Indexes | Investing | Markets | Politics | Stocks | Trading | U.S. Equity | Coronavirus