Predictions for the new year are everywhere. I am not fond of them, so you won't get any from me. I am, however, happy to share with you where the indicators for the market are at present.

Over the last month, we have seen the number of stocks making new highs stall out. We have also seen plenty of speculation, which mostly began in late November around Thanksgiving (remember that super high Nasdaq TRIN reading on an up day?) and hasn't let up much in December. Even suggesting your company is involved, or might be involved, in electric vehicles or solar has become the year's equivalent of adding dot-com to a corporation's name in 1999 -- or blockchain a few years back.

In the last week, we saw the Russell 2000 break down out of the very steep channel that had been in place for nearly two months. We also saw the Russell have its first down week since late October.

But here's the thing. So many stocks that were terrific movers in November were terrible in December. Oh, they didn't collapse, they just stalled out, with no follow-through from their terrific run. And that in turn has caused the far too enthusiastic sentiment we saw in early December to ease off. It's hard to get more bullish when so many stocks are churning, isn't it?

Just witness the National Association of Active Investment Managers (NAAIM) Exposure index as it has backed off from the super high reading of 106 to 82 in the last few weeks. 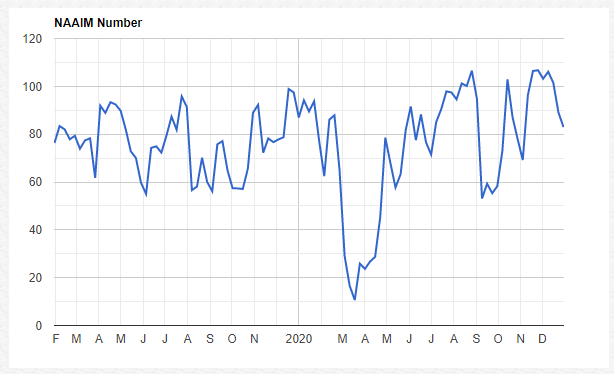 The Investors Intelligence bulls have down ticked marginally from 64% to 62%. The American Association of Individual Investors (AAII) has seen the bulls back off ten points in a month.

Or the equity put/call ratio's 10-day moving average, which has moved up from just under .40 to .45 in the last few weeks.

That is human nature. Everyone was so bulled up in early December and then stocks stalled so they got less bullish. I do expect we will have a correction, likely in this new month of the new year. My only issue is that is fast becoming a consensus view.

In the meantime, the short-term oversold condition we had heading into Christmas is not yet overbought. I expect that to arrive late this week. As always I will focus on breadth, but I will also be watching the number of stocks making new lows.

That has not shown much of an increase on the NYSE. Nasdaq has had a few more. Should new lows expand that is much more problematic.

Is Bristol-Myers Squibb Finally Ready for a Breakout?

Prices have rallied from early March and are in a position to test their January highs.

Large purchases of Cortexyme Inc. and NantHealth Inc. shares have been made by insiders recently.

Watch for the Possible Resumption of the Rally in Marathon Digital

I'm looking for a buy 'trigger' against the support and timing.