By STEPHEN GUILFOYLE Aug 15, 2019 | 11:50 AM EDT
Stocks quotes in this article: AMZN, WMT, KSS, TGT
We had always thought that from the ashes of what was once the broader retail industry would rise a champion. A new champion had risen.
A game changer. Amazon ( AMZN) . The "Death Star"... the greatest disruptor to the usual way of doing things of all-time. That's not a vilification. It's more an admiring compliment. Still, there was an old champion that refused to die with the rest. An old champion willing to adapt, with the strongest presence in the nation in traditional retail, and the lines of distribution in place to boot. Is it possible for an investor to be attracted to them both? Of course it is.

President Donald Trump on Aug. 1 announced planned tariffs of 10% on the remaining $300 billion or so of un-taxed Chinese imports into this country. The tariffs have since been pushed back, but that is the day I seriously started narrowing my portfolio. The first group I used to raise cash was the retailers.
For a few, this was a no-brainer. I had profits. I remember pausing when I got to Walmart ( WMT) . Why? because I believed in their story, and I love the firm's purely aggressive style for corporate execution. Still, I live by a code of discipline -- not to mention, that position had worked quite well. So, I sold. The retailer that I chose to hang onto, for diversity's sake was Kohl's ( KSS) , and not for the right reason.
I hung onto Kohl's, because that was the one name in the space that I was still in the red, and I relish the rush of playing this game when I am behind. Sort of like a dare.
My intent as far as Walmart had been concerned was on Aug. 1 to buy the shares back at a discount. By Aug. 14, the night before earnings, the complexion of the financial markets in their entirety had changed. After putting the firm's numbers to the tape on Thursday morning, the shares are trading in the pre-opening approximately where I sold them. Have I missed my chance to grab a discount? Should that matter? Let's play ball.

For the firm's fiscal second quarter, the firm reported adjusted earnings per share of $1.27, two cents less than earned the same period one year ago, but a nickel better than what was expected. Walmart generated revenue of $130.4 billion, growth of 1.9% year-over-year, as well as more than $1 billion above consensus expectations. Total transactions grew by 0.6%. Average ticket increased by an impressive 2.2%.
Comparable sales (really important) showed a 2.8% increase, well above expectations. This in part was due to Sam's Club. That business showed comp sales of plus 1.2%, twice the growth rate expected. This better than expected comp sales growth is all the more impressive when one considers that the firm the minimum age to purchase tobacco products across all brands to 21,while reducing selection by completely removing flavored tobacco products that minors might be attracted to.
Now, E-commerce. Another very strong print at plus 35%, and plus 37% for the U.S. Walmart brand. On the results, CEO Doug McMillon said, "We continue to have momentum, especially in the U.S. We're favorably positioned as we leverage our expansive Supercenter network to deliver a robust omni-channel experience."
That's just it. I know from my own experience, when I choose to buy online, I check both Amazon, and Walmart prior to pulling the trigger.  The grocery business is a big help here, too, as well as in same store sales.

The firm did acknowledge having to pressure suppliers on price as tariffs impacted goods imported from China. Still, the firm now sees profit for the full year 2020 at anywhere from slightly lower to slightly higher vs. 2019. This is above industry consensus of a 2% decline. Walmart is also now guiding expected full-year comp sales toward the higher end of 2.5%-3% range.
My thoughts? Retail is obviously challenged. The U.S. consumer is still quite healthy. The Census Bureau's report for July Retail Sales supports that, although those numbers were at least in part energized by Amazon's Prime Day, as well as competing events held that week by Walmart, by Target ( TGT) , and by others. For me, though, in the end, it really is about those three: Amazon, Walmart, and Target.
They are the ones who are able to, and will benefit from, scale, and the technology to gain advantage from customer data. Not to mention for Walmart, and Target, an increasingly omni-channel presence. 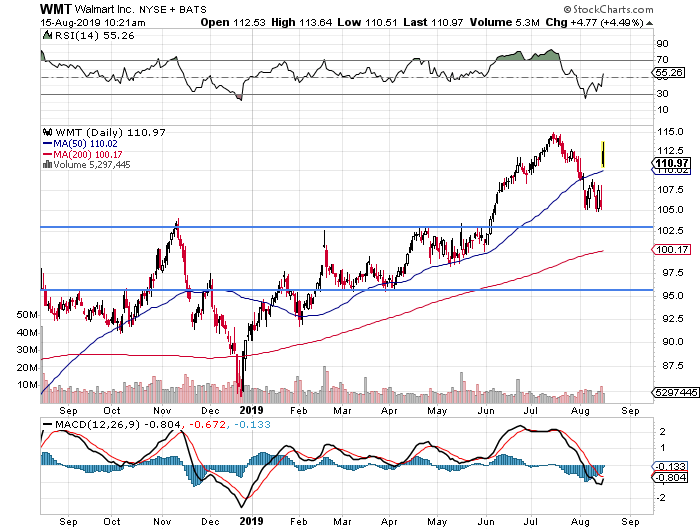 Here one sees the breakout in early June of the basing pattern that ran from late February through that date. Since, support has been established close to $105, as the shares try to hold the just taken 50-day simple moving average. A trader could buy the shares right here. For me, that would at least be close to my out of two weeks ago. That said, I think I would rather buy these closer to $107, or on momentum above $115.

Net Credit: 55 cents.
Note: The idea is to expose the investor to upside risk above $115, and pay for it (and add some) by exposing that investor to increased equity risk at a discount. Worst case? The investor ends up long $200 shares at a net basis of $107.23 with the shares trading below $105.

Get an email alert each time I write an article for Real Money. Click the "+Follow" next to my byline to this article.
TAGS: Earnings | Investing | Stocks | Retail | Stock of the Day

If You're Buying the Dips in QQQ, Here Are 2 Zones to Consider

There are a pair of moving averages to watch in this process.