An interesting thing happened in the market on Thursday. We rallied, however small, and no one seems to have gotten bullish. In fact, the rally appears to have made everyone more bearish.

I posted a Twitter poll in the middle of the day, asking folks if they thought we would break the 200-day moving average line, which sits just below where we are. It was a simple "Yes" or "No." Now, I admit these polls are not the least bit scientific, and it's been a while since I last made one. But I got over 1,000 respondents.

Rarely do we see a wide spread in these types of polls. I consider a 60-40 split a way to see which way the majority is leaning, as that has tended to be a wide spread. Thursday's split? 69% thought we'd break the 200-day moving average line. A mere 31% thought we wouldn't.

I can give you another sentiment data point. The National Association of Active Investment Managers (NAAIM) asks their members to tell them what their current exposure to equities is each week. It is by no means extreme -- that's what we saw in November and December when it dipped under 40% -- but this is down from just over 90% to 60% now. 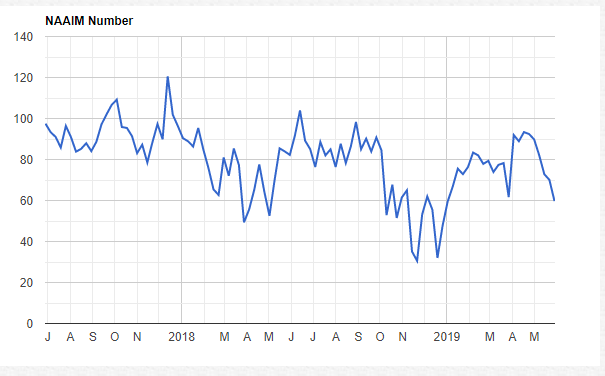 The American Association of Individual Investors bears are steady at 40%, pretty much where they have been for the last three weeks. The four-week moving average of this indicator has moved from 22% a few weeks ago to a current reading of 35%. Four weeks ago, the reading was 23%, so if we see these folks get even more bearish in the next week this moving average line will scoot up near 38%-40%, which as you can see doesn't happen often. I wish the other surveys confirmed this one's extreme though. 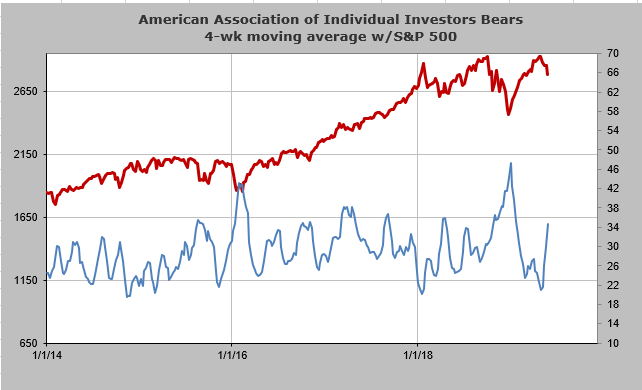 As for the intermediate-term indicators, they move slowly but they are still dropping, heading toward oversold readings. The Volume Indicator is now at 45%. A reading in the low 40s has typically marked an intermediate-term oversold condition.

The Hi-Lo Indicator is moving down rather grudgingly as it has gone from 36% earlier this week to 34% as of today. Under 20% and this is oversold.

Folks ask me what the news could possibly be that would make us rally. Quite frankly, a month ago when we were on the verge of a trade deal with China and sentiment was elevated, you might have asked the same question from the other side: What could possibly make the market fall by 6% or more?

I never know the news. If we knew the news, it would already be priced in. But somehow, someway, the news tends to show up when the indicators line up, or at least close to when they line up. Waiting is the hardest part.