During the first "Executive Decision" segment of Thursday's "Mad Money" program, Jim Cramer sat down with Scott Sheffield, president and CEO of Pioneer Natural Resources Co. (PXD) . The stock has been under serious pressure the last few weeks as it has followed the price of oil lower.

Sheffield came out of retirement to help lead the charge at PXD, saying he did it for the investors and employees. Pioneer Natural Resources had to take some tough but necessary cost-cutting decisions, but that's left the company with a very strong balance sheet. "I'm very excited about the future," he said.

Pioneer Natural Resources is sitting on a very generous amount of land in the Permian Basin that has an incredibly low cost basis from 20 years ago, Sheffield said. Keeping its costs down allows the company to maximize its profitability, and that should make it attractive going forward.

While the major oil companies are upping their production levels, they'll eventually need to turn to merger-and-acquisition activity to fuel growth, Sheffield said. While big M&A deals by these companies is probably a few years down the road, they should eventually come, he said, which will make companies such as Pioneer, Concho Resources Inc. ( CXO) and Parsley Energy Inc. ( PE) attractive targets, he believes. Before we make the trip down the road, let's check out the charts of PXD here on Friday.
In this daily bar chart of PXD, below, we can see that prices were nearly halved from their 2018 peak. PXD made a 50% rebound this year from around $120 to near $180. Prices have slipped from their April zenith and are indicated lower before Friday's opening bell. PXD is below the declining 200-day moving average line and a still-rising 50-day average line.
Trading volume looks like it has increased in the past two months and the daily On-Balance-Volume (OBV) line has been declining since late April, signaling that sellers of PXD have been more aggressive. The Moving Average Convergence Divergence (MACD) oscillator crossed to the downside in late April for a take-profits sell signal, and recently this indicator slipped below the zero line for an outright sell.

In this four-year weekly chart of PXD, below, we can see a weakening picture. Prices are below the declining 40-week moving average line. There is some chart support in the $140 to $125 area, but next support looks to be in the $110-$100 area. The weekly OBV line was bullish from late 2017 to April of this year, but it may have started a new weakening trend. The weekly MACD oscillator is turning down now for a fresh sell signal on this longer time frame.

In this Point and Figure chart of PXD, below, we can see a downside price target of $129 projected. A decline to $129 or so is likely to break the March low and open the way to further declines. 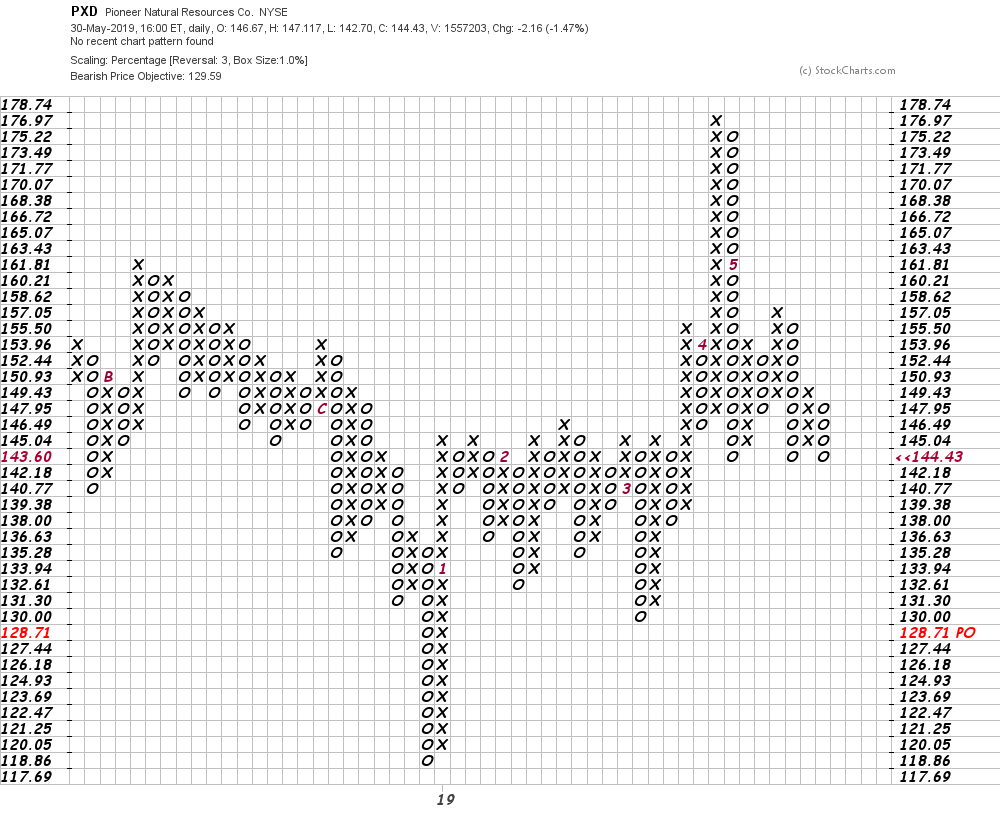 Bottom line strategy: Energy prices look like they will continue to retreat, so PXD is likely to be on the defensive the next few months. A better buying opportunity lies ahead.

Get an email alert each time I write an article for Real Money. Click the "+Follow" next to my byline to this article.
TAGS: Mergers and Acquisitions | Investing | Stocks | Technical Analysis | Energy | Natural Gas | Mad Money | Executive Interview | Real Money |

No Place to Hide, Assessing the Beatdown, Dragon Breadth, Just Warming Up?

We ran, we ran all night and day... right back into U.S. Treasury securities, once again flattening the curve.