Arora said that Palo Alto has spent the past three-and-a-half years rebuilding its platform from scratch and now has the ability to detect and stop attacks as they happen.

Cybersecurity is more relevant than ever, Arora added, as nations, companies and hacker groups are all probing for weaknesses they can exploit. Companies have to keep their stuff safe, he said, and that means making security a priority, especially as the complexity of our technology grows.

We last reviewed the charts of PANW on Jan. 10 and told longs that "With weakness in the broader market, I would maintain that recommended stop at $490." Traders should now be flat.

In the daily bar chart of PANW, below, we can see that the shares have been correcting 2021 gains with a sideways to lower movement since late December. PANW has gapped higher Wednesday but still trades below the declining 50-day moving average line. The rising 200-day moving average line was almost tested/touched in January and the other day.

The trading volume has not increased the past two months as prices declined and I would view that as a positive. The On-Balance-Volume (OBV) line, interestingly, has moved higher since August telling us that buyers of PANW have been more aggressive even as prices traded sideways.

The trend-following Moving Average Convergence Divergence (MACD) oscillator is close to crossing back above the zero line for an outright buy signal.

Trading volume has declined from early January suggesting that prices have fallen more of their own weight than from heavy selling. The weekly OBV line turned lower in early December and made a low in January and so far another equal low in February.

The MACD oscillator is pointed down and has yet to start narrowing.

In this daily Point and Figure chart of PANW, below, we can see a potential downside price target in the $397 area. A rally to $540 may be needed to turn this chart positive. 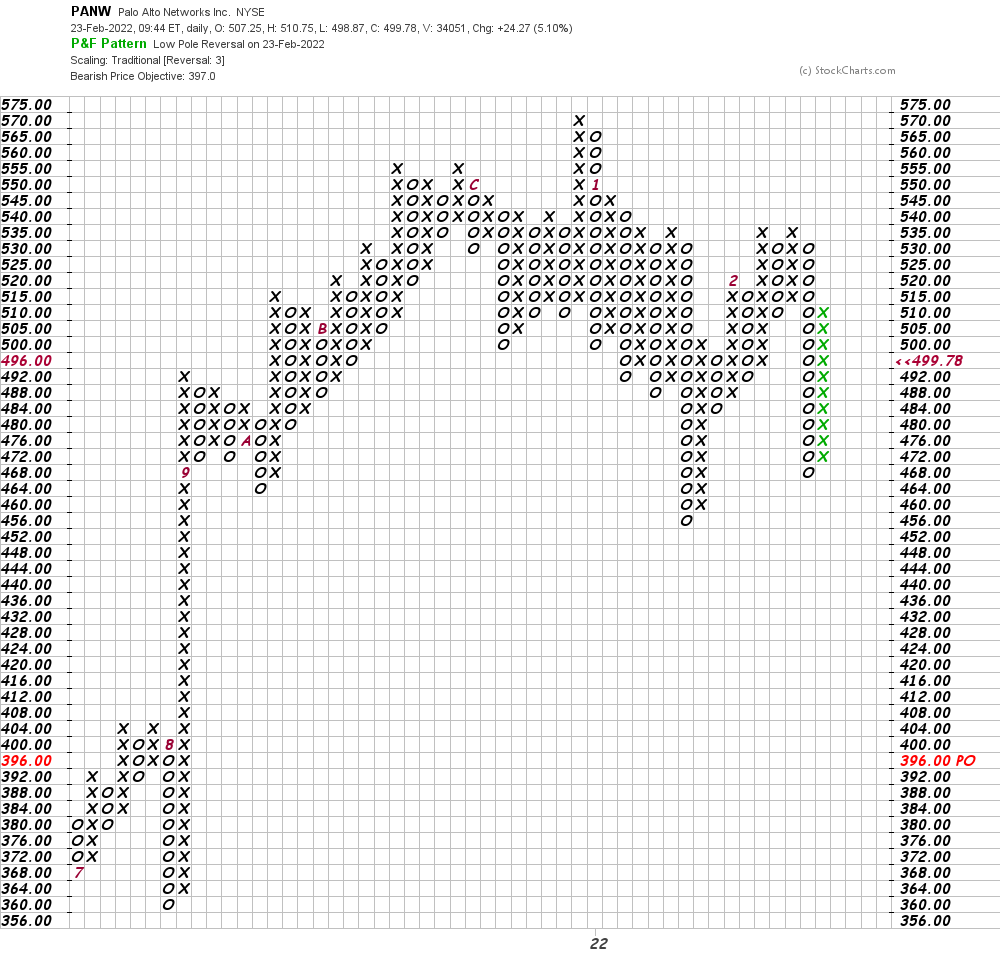 In this weekly Point and Figure chart of PANW, below, we can see a potential downside price objective in the $338 area.

Bottom-line strategy: I consider technical forecasts an acquired skill. Some of the tools are visual and very subjective. Some tools are quantitative. Experience counts as does the direction and tone of the broader market. With PANW I see the potential for some further near-term price gains but the risk of further declines if we get another rally failure. Net, net -- let's see how things develop before making a strong recommendation.

Get an email alert each time I write an article for Real Money. Click the "+Follow" next to my byline to this article.
TAGS: Investing | Stocks | Technical Analysis | Cybersecurity | Technology | Technology Hardware & Equipment | Mad Money | Executive Interview