No, he is not enshrined in Cooperstown. Instead he is one of the many excellent ballplayers who is probably just outside of being elite enough in his prime to be mentioned as one of the all-time greats. That said, he was a perennial all-star in his prime, and more than probably the best "clutch" pinch hitter of at least in my lifetime late in his career. His number was retired by the now largely forgotten Montreal Expos, and he was simply one of the most popular New York Mets in the history of the franchise.

His name was Daniel Joseph Staub. Baseball fans knew him as "Rusty" and his nickname was Le Grande Orange.

Rusty Staub passed on in March of 2018. I had the pleasure of meeting the man back in the day, as he was visiting the trading floor of the New York Stock Exchange for a Catholic Charities event. Very nice man. I mentioned his most excellent 1975 Strat-O-Matic baseball card. He knew it well. I always liked when ballplayers could continue a conversation when I brought up the card and dice game that I played constantly from childhood into early adulthood. It showed to me that they had at least some grasp of being able to take advantage of mathematical probabilities created through statistical patterns in order to reach a conclusion. After all that is what baseball is. That is what this sport is. Our sport.

One has to be fully cognizant that losses are practically inevitable. So are victories. The difference in performance comes in how one manages risk once risk is created than in how often one is right versus how often one is wrong. A hitter can bat .300, and barely improve his team's chances to win a ballgame when the pressure is on. Another hitter may be able to slow the game down when the pressure is on, and do so much more with the same batting average.

After his career had closed, Staub, who had hit major league home runs both as a teenager and as a man in his 40s, was asked about the science of hitting. He said, "The most important thing is to understand yourself, to learn what you can and cannot do, to be able to adjust and compensate." Yes, Staub was speaking about what he did for a living. He just about perfectly described not just how we all go about earning and providing, but the game of life itself. Staub, that day, so long ago, described survival, whether he knew it or not.

Where Do I Begin?

I guess for lack of a better idea, we'll go back to last Wednesday, Dec. 9. That was the first of four consecutive "down" days for the S&P 500. This streak seemed almost certain to come to its natural end on Monday (yesterday) as our broadest of large-cap indices had been up 0.9% at one point early on. The first batches of the Pfizer (PFE) / BioNTech (BNTX) Covid vaccine had been shipped, and the very first healthcare providers actually dosed. Moderna (MRNA) appears, if all goes well this Thursday, to be hot on Pfizer's heels. It was raining in New York, but New Yorkers for the first time in more than nine months could see the sun.

New Yorkers were quickly snapped back to a more negative real-time reality. New York State now has 5,172 patients in the state's hospitals for Covid, up more than 1,000 in just a week's time. At his midday briefing, N.Y. Governor Andrew Cuomo stated, "If we do not change the trajectory, we could very well be headed to shut down." This, after the governor had already decided to close indoor dining in NYC starting on Monday. I don't criticize that decision. I have not dined anywhere, but home or a park bench since March. I know a lot of folks who also have not dined out. Still, this is a negative for a local economy already badly injured. At the exchanges, algorithms reacted instantly.

New York City Mayor Bill De Blasio piled on, so to speak, "The likelihood of more restrictions soon is high, so folks should begin making adjustments soon and work remotely if they can." Later in the day, the United States suffered its 300,000th Covid-related death. Each time one of these headlines crossed, key word reading algorithms picked off their slightly slower siblings and took markets down a peg or two. For comparison, the United States suffered 2,977 deaths related to the terrorist attacks of Sept. 11, 2001, 58,209 military deaths in Vietnam from 1955 through 1975, and 405,399 military deaths in World War II from 1941 through 1945.

Markets now live in an environment where there is good reason for optimism looking ahead, while the here and now remains mired in misery. Because intraday price discovery is dominated by keyword reading algorithms, we have seen at least in the present, a narrowing of market leadership. Remember the "broadening" trade that so many "pundits" misunderstood back in November, and early December, and referred to that action as a "rotation"?

Well, this narrowing, and should it continue, really is a rotation. Why? Simple. Because in order to buy the Semiconductors, to buy Software, and to buy the Internet names, managers have actually started to sell the Financials, Materials, Industrials (including the Transports), and yes, Energy stocks. When managers were aggressively buying value, they were still buying growth, just with less vigor. Now, they are taking their pound of flesh out of value and continuing to purchase growth.

Traders and investors alike need to keep in mind that our markets are in a vulnerable position right now. The fact is that markets always are, but right now, this susceptibility to news flow is magnified. Would anyone be surprised if equity markets took a tumble on a misspoken word by Fed Chair Jerome Powell this week, or an unwelcome headline concerning vaccine distribution? That said, what do you think markets will do should Congress ever get their collective heads out of the proverbial sand? (See how nice I was there?)

Should Congress act on behalf of the American people who are falling behind on rent, rental income, debt service, and payroll, but are also so casually spoken of in terms of being shut down while political leaders talk of raising taxes (Can't get blood from a stone... everyone who could/can leave is either already gone or working on it), these markets will take another leg up.

We know that a bipartisan group of senators and representatives had hoped to bring forth a smallish (<$1 trillion) fiscal support package that would patch at least some holes for households, and smallish employers. The two sides are still stuck on points where they have not moved in some time. Republicans still want liability protection for businesses and schools that Democrats are unwilling to grant. Democrats want more aid for state and local governments that have been overwhelmed. Republicans see these states as having been mismanaged prior to the pandemic, and have not given ground.

One idea is to pass an even smaller bill that would omit both of these points, and leave them up to the next Congress. This idea of an even smaller fiscal support plan is one more negative that hit markets on Monday. Perhaps our legislators proceed with a little too much complacency. Last week, the Federal Reserve told us that household wealth "popped" by $3.8 trillion in the third quarter to a record $123.52 trillion. While no one sees this distribution of wealth as particularly even, the New York Fed published a report on Monday showing that U.S. households expect to increase spending by 3.7% a year from now. That is up from 3.1% the last time this survey was conducted in October. The interesting thing here is that the New York Fed reports that the driver for this expected increase was households earning less than $50,000 per year.

Is this even possible with so many out of work, and underemployed... with fiscal support such a question mark? My guess? Any rise in spending will come from things like make-up mortgage/rent payments, and commuting costs (in a re-opened economy), not anything close to discretionary in nature. I fear our legislators, as so many are not of common background, see these statistics and misunderstand the plight of the lower to middle class American in this environment. Most folks do not have gigantic freezers devoted solely to storing ice cream. Most folks actually hope they have enough toilet paper stored for the next shortage. 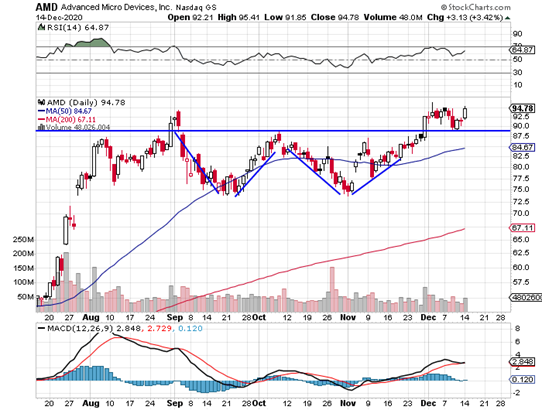 Note that Advanced Micro Devices (AMD) , bounded off of pivot last week, appeared to make another attempt at a breakout on Monday. Our price target remains $106. 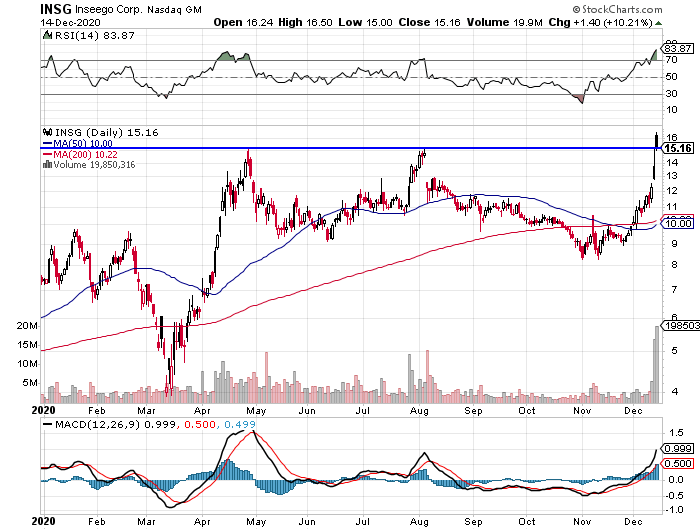 Inseego (INSG) has charged higher over the past few days on news that T-Mobile (TMUS) would unveil the firm's 5G MiFi M2000 as its first 5G hotspot. When customers add a line, T-Mobile will offer the device at a 50% discount, which would have the device sold for $168 or $7 per month over a couple of years. The product has now also been launched as the next-generation hotspot by Vodafone Qatar.

Our price target for INSG is an even $19. I got scooped on these overnight, so I am flat and will have to buy them back if I see a dip. My caution is that even though the shares closed up 10% on Monday, they did close almost precisely at pivot.

(AMD is a holding in Jim Cramer's Action Alerts PLUS member club. Want to be alerted before Jim Cramer buys or sells this stock? Learn more now.)

Get an email alert each time I write an article for Real Money. Click the "+Follow" next to my byline to this article.
TAGS: Federal Reserve | Futures | Indexes | Investing | Markets | Politics | Stocks | Trading | Coronavirus