Sometimes I love being "that guy," sometimes I hate it. Always sifting through data. Always seeking out patterns others may or may not have recognized. Can't just enjoy a strong week (month, year, decade, era, lifetime) for equities.

So many folks I read saw nothing but green on Thursday. Record levels for the S&P 500 and Nasdaq Composite. Nine of 11 sectors trading higher as (not that) suddenly the reflation trade reasserted itself. The Financials led the sector performance tables for the day as bond traders have been selling U.S. Treasuries out on the longer end of the curve with some aggression since Wednesday morning. Small-caps outperformed large-caps. The airlines lifted the Transports, while travel, lodging and gaming led the Consumer Discretionary sector higher. That's because we all pack casinos when we hear of viral spread.

All seemed well across the realm, unless one looks at things like new highs, which were subdued, and trading volume. which bordered on anemia. Breadth away from those two keys was fine. Winners beat losers by a rough 5 to 2 at both of New York's primary equity exchanges. Advancing volume beat declining volume by a similar ratio for names listed at both locales. Still, it is hard to get past the lack of actual transaction in aggregate. The Nasdaq Composite has put together a four-day winning streak, yet aggregate trading volume for names comprising that index has not touched their trading volume 50-day simple moving average (SMA) even once this week.

The S&P 500 does not have the winning streak, but trading has withered, and on Thursday, as the index peaked, aggregate trading volume for names subordinate to that index fell a whopping 26% short of the 50-day trading volume SMA for that index.

Do rising prices even count without the kind of trading volume that implies institutional conviction? It does if you bought or sold anything at those highs. Maybe, maybe not, when it comes ahead of employment data sure to impact thought on policy direction, or ahead of the Senate finalizing plans to vote on an ever-more-complex infrastructure bill that eventually will lead to increased use of fiscal policy this autumn that could (will) flush an already too-liquid economy with.. wait for it... more liquidity. Ooh. Ahh.

Yes, I still do expect this equity market to stumble at some point in the short-term future, and I have raised cash levels in preparation for that. Am I wrong? No. But, Sarge, the market is trading higher. Good point, my young Padawan. Let me explain.

Part of risk management is preparation. I am still net long the marketplace. I have to be. This is my livelihood. I have to respect trend. That said, when I cross a busy avenue, and see the cars coming but they are still almost a block away, I tend to jog the last few steps. Understand? Making a little more money is not as valuable to me at the top of a long positive trend as is tamping down volatility within my own portfolio in the face of potential short- to medium-term disruption.

You probably noticed the major equity indices race higher over the final 45 minutes of the trading session Thursday. There was a belief on Wall Street late on Thursday that Senate Majority Leader Chuck Schumer, Democrat of New York, would bring the $550 billion bipartisan infrastructure bill up to the broader Senate for a vote on passage by Thursday evening. The process stalled as disputes erupted over how to target cryptocurrency transactions as a driver of revenue, and an amendment was added that would permit state and local governments to spend at least part of their unused COVID relief funds on infrastructure.

The bill is fully paid for. That's what we the people have been told. We have also been told by the CBO (Congressional Budget Office) that this bill, if passed into law, will add $256 billion to the federal deficit over 10 years. Fully funded. Almost 50% not quite so fully funded. What's the difference? This only sets the table for what comes next.

The Senate likely will vote on the 2,700-plus page bill on Saturday (tomorrow). Passage paves the way for debate over President Biden's $3.5 trillion-ish spending package that will focus on social issues. Speaker Pelosi has conceded to demands made by the extreme left of her party and already has made mention that she will handcuff the smaller infrastructure bill in the House until the Senate also passes the much larger package. That, however, will not be this week's news.

Financial markets were also quite receptive to strategists at Goldman Sachs, who on Thursday followed and matched Oppenheimer (Opco made the move on Monday) by increasing its year-end 2021 target for the S&P 500 to 4,700. Goldman cited better-than-expected earnings and low interest rates as catalysts, while also increasing its year-end 2022 S&P target to 4,900. For traders (should not we just call them algorithms at this point?), the move for Goldman to 4,700 was a big deal as this move represents a 7% upside from here and was up from a target of 4,300 that had implied outright large-cap contraction (-3%).

While Oppenheimer leads and Goldman plays catch-up, maybe no one notices that the negative impacts from the spread of the Delta variant of the virus that causes COVID-19 is hampering an economy that was already growing at a pace well below expectations. Just off the top of my head, I believe that BlackRock (BLK) , Wells Fargo (WFC) , Alphabet (GOOGL) , Amazon (AMZN) , Lyft (LYFT) , Uber (UBER) and others have all announced plans to push back dates when white-collar workers would be required to return to their offices.

Out on Long Island in New York, the local news discussion around the back-to-school season has shifted in just a couple weeks from doing so normally to how to do so safely. Obviously for school-age children a third consecutive school year will be disrupted in a way from which they may never recover cognitively. That's just my take. I am not an educator, but like you I was a student, and I know that if I was learning from home as a teen that I would not be learning at all.

Even if July job creation is strong, which I do expect due to both reduced jobless benefits and a favorable seasonal adjustment, one must keep in mind that viral spread has increased rapidly and recently. The incomplete reopening of schools will keep single parents and second earners on the sidelines here in the U.S. while unchecked spread globally will slow the unwind of constricted supply lines. I recognize risk, even awash an overly liquid environment, for a reason. I do not necessarily think that markets close out the year lower from here. I do think that over a four- to six-week period that markets, while at their weakest time of year seasonally, will be subject to increased headline risk.

Five months ago, Beijing placed a ban on imports of Taiwanese pineapples as a means to pressure the government in Taipei politically. Turns out that Taiwanese pineapple exports to Japan increased eightfold over the four months that ended June 30 while the price of Taiwan's most important crop has increased 28% to 22.1 New Taiwan dollars per kilogram. The New Taiwan dollar exchanges for about $0.36 in the U.S., so that's about $7.96 to you and I.

... the market has this whole Robinhood concept backwards. Last week, ARK Invest's Cathie Wood was buying Robinhood Markets (HOOD) at a discount to the stock's $38 IPO price. On Wednesday, the stock retook that level. On Thursday, retail traders, prodded along by high-frequency algorithmic traders, took the shares up to $85 apiece. Thursday morning, various Robinhood shareholders announced the intention to sell 97.9 million shares over time. The company will not receive any proceeds from these sales, which will come via convertible notes offered earlier this year. The shares closed on Thursday at $50.97.

Is the modern marketplace fair? You decide. I do know that in an ongoing two-sided open outcry auction market model with 25 traders in colored jackets fighting over eighths, that this kind of nonsense does not happen. Remember when some of you used to blame the specialist in any (every) given stock for all of your poor decisions? Yeah, how's that working out for ya? No more poor executions? LOLOL (really laughing out loud).

Holy moly. On Thursday morning, Wayfair (W) , the (mostly) furniture e-tailer, ripped the cover off of the ball when it reported second-quarter performance. Sales were 10.4% lower year over year at $3.9 billion and missed expectations. Earnings? Adjusted EPS landed at $1.89, an annual contraction of 34.3%. GAAP EPS at $1.14. Both were massive beats, however, of what the street was looking for. Gross margin printed at 29.2% versus the consensus view of 27.9%. Adjusted EBITDA hit $310.8 million versus the $228.8 million that analysts had centered around. Active customers reached 31.1 million, which was good enough for growth of 19.6%.

I am one of them. First-time user. I bought a new squat rack for my home gym. Who knew that Wayfair sells fitness equipment, and at better than competitive prices? Color me impressed. The market was impressed as well. The shares popped 14%, closing Thursday at $276.16. 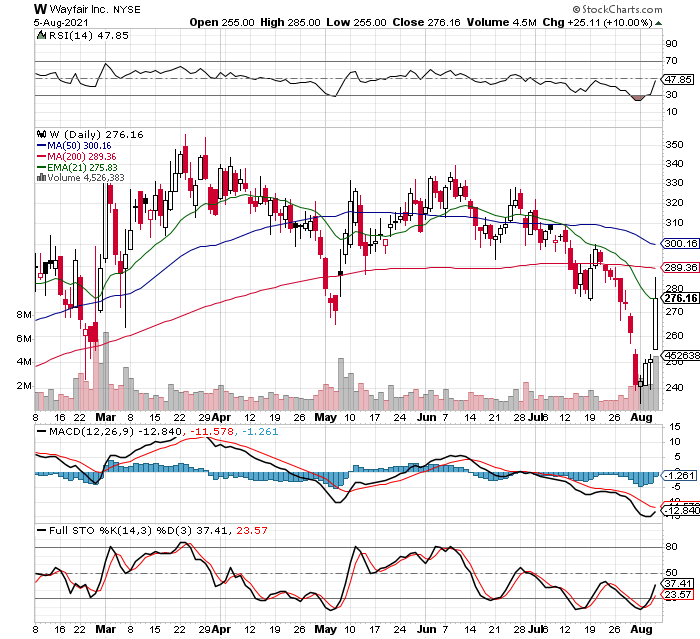 Now, we look at the chart. I am not in the stock. Even with the sharp move on Thursday, the dour-looking daily moving average convergence divergence (MACD) has still not experienced a bullish crossover of the 26-day exponential moving average (EMA) by the 12-day EMA, and that's with both the Relative Strength Index (RSI) and Full Stochastics Oscillator climbing out of oversold territory and working their way toward neutral readings in just a few days.

I'll tell you what, the shares did leave a very small gap in between $253 and $255. I am honestly not sure if a gap that small has to fill.

This is what I think. The shares closed just above the 21-day EMA. If they hold that level here on Friday morning that means the swing crowd is done taking profits. That puts the 200-day SMA at $289 in the crosshairs.

Missed the move? Me too. Don't feel bad. You could be J.P. Morgan, which kept an "underweight" rating on Wayfair earlier in the week while reducing its price target from $240 to $200. Ouch.

Get an email alert each time I write an article for Real Money. Click the "+Follow" next to my byline to this article.
TAGS: IPOs | Earnings | Indexes | Investing | Stocks | Retail | E-Commerce | Real Money | Consumer Discretionary | Coronavirus