Volatility has returned and I do not think it is going away, but I do think we might get a reprieve for a day or two.

First of all, we waited a week for the overbought reading to have some real selling, so when we got it, it arrived like a dam broke. You can see the Overbought/Oversold Oscillator has finally fallen back under the zero-line.

Remember this is about the math behind the indicator, which is the 10-day moving average of the net of the advance/decline line.

For the next few days, the 10-day advance/decline line will drop some negative readings, giving it a chance to have some upside relief.

Then there is the McClellan Summation Index, which has now turned down. It will need a net differential of positive 2,300 advancers minus decliners to turn it back up, so in that sense, it's not bullish. But once it needs positive 2,000 or more it has taken a step into oversold territory. I don't call either of these oversold, I would just say the S&P 500 tumbled 3% to 4% in two days, so it deserves some upside relief.

We can also point to the rise in volume for the Invesco QQQ (QQQ) . They saw the largest pick up in volume on a down day in nearly a month. Typically high volume down days lead to a short-term rebound. I'll admit the volume wasn't that high (over 75 million shares would have been more obvious) but 65 million is close. 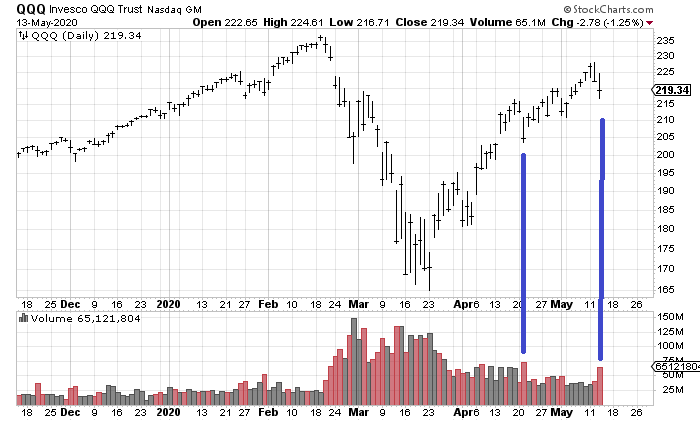 Finally there was the sharp rise in the put/call ratio, which chimed in at 118%. So folks went from bordering on giddy on Monday, when the equity put/call ratio was 50%, to scared again, also just a short-term indicator.

Those are the reasons for a relief bounce. The reasons why I think the volatility is not yet done start with the rollover in the Summation Index. It took a long time to get to this point, so it's hard to imagine it will turn and head back up so readily. But it's also the sharp rise in stocks making new lows.

Yesterday, I noted that Nasdaq had seen new lows nearly triple from the prior day. Since Monday new lows on Nasdaq are up six-fold. New lows clocked in just shy of 100, which is the highest reading since early April. That is not a positive.

I know many are going to shrug at that new lows reading, because they will think, aw heck, it's just banks. But notice the Bank Index isn't even at that early April low of 60 yet, and the number of stocks making new lows is the highest since that period of time. Either way, banks are getting a bit oversold and the crowd is screaming rather loudly so they too could see some relief before heading down again.