This is profoundly disappointing. Certainly for Biogen (BIIB) shareholders, who are taking a beating this (Thursday) morning, but really for the rest of us as well.

Sadly, Biogen and the company's partner Eisai Co. (ESALY) have announced the cancellation of late-stage trials for their drug candidate "aducanumab" in patients with mild cognitive impairment due to Alzheimer's disease and mild Alzheimer's disease dementia.

With the announced cancellation of late stage trials for aducanumab, Biogen and Eisai wish to make clear that there were no safety concerns associated with this halt. The decision to pull the plug had been made as these studies simply showed that the candidate was unlikely to meet primary endpoint goals.

Just last year both Biogen and Eisai had expressed confidence that this drug would be able to reduce the pace of decline in cognitive ability in patients suffering from this disease by as much as 30%, over an 18-month period versus a placebo. Expectations had been for considerably less.

Biogen CEO Michel Vounatsos was clear "We will continue advancing our pipeline of potential therapies in Alzheimer's disease and innovative medicines for patients suffering from diseases of high unmet need." Investors have to understand that a lot of success in this drug had been priced into the last sale prior to this news, and now traders have to figure out how to unpack that value. 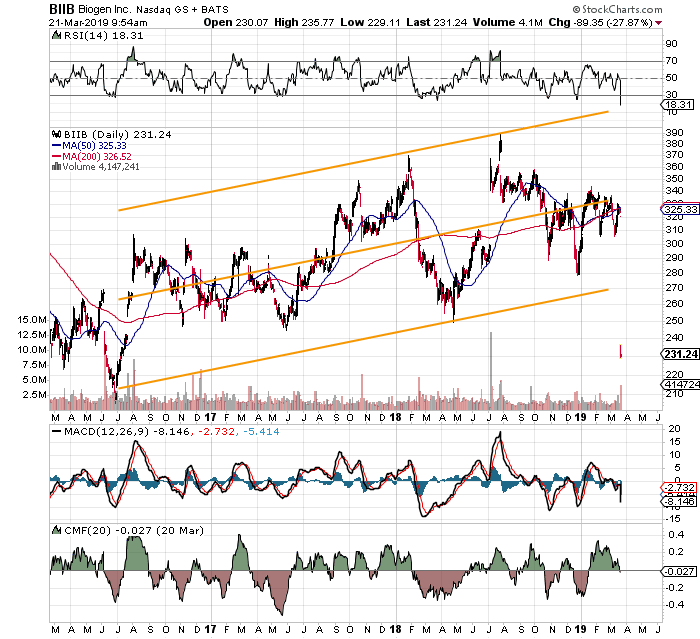 What we see Thursday morning, though, is a name down $90, or 29% on the day. Relative Strength, Money Flow, and the daily Moving Average Convergence Divergence (MACD) are all significantly against, and the stock just suffered a death cross.

The action will trigger algorithmic response on both sides of the point of sale. In addition, forward-looking revenues must be adjusted. That means downgrades over several days. Unfortunately, there is not a lot of short interest in this stock, meaning that there will not be a run of profit-taking, thus less support from that quarter.

I really think all we do know is that BIIB has been extremely volatile, and that will continue. Given the size of this displacement, the options market is now out of whack to some degree, and will not serve the purpose of hedging a short-term position.

Actually, I may do this, or something like it after publication.

Get an email alert each time I write an article for Real Money. Click the "+Follow" next to my byline to this article.
TAGS: Investing | Stocks | Trading | Biotechnology