Friday morning, in Market Recon, I alluded to the fact that I had not traded Salesforce.com (CRM) all that effectively of late, but took solace in that I had done a better job with VMware (VMW) .

Does this Friday 7%-ish decline make VMware a buy for me? I've got to tell you, I see VMW trading in the high $130s and my engine gets running.

For the second quarter, VMware reported adjusted earnings per share of $1.60 on revenue of $2.44 billion, both beats. The revenue number was good for 12% yearly growth, which is in line with the company's sustained performance.

VMware announced late Thursday definitive agreements to acquire both Pivotal Software (PVTL) and Carbon Black (CBLK) for a combined enterprise value of about $5 billion. Clearly, VMware is serious about expanding the suite of cloud software available to clients and potential clients.

For those in need of a quick explanation, Pivotal is a cloud-based firm focused on tools of development whose clients are other software firms. Carbon Black is also a cloud-based name, with a focus on cybersecurity for other cloud-based operations. The deals are expected to close sometime during the second half of the fiscal year.

We can haggle about price, but from a strategic point of view, I admit to being a fan of these moves. Check out what VMware CFO Zane Rowe had to say: "We expect Pivotal and Carbon Black together will add more than two points of revenue growth and over $1B in mostly hybrid cloud subscription and (SaaS) revenue to VMware's total revenue in year one, and meaningfully increase our total revenue and hybrid cloud subscription and SaaS to over $3B in year two."

This is a mouthful, yes, but the inference is clear. Rowe goes on to add that he expects the combination of the two firms to be income positive the first year, and cash flow positive the second year.

Keep a few items in mind. VMware is still controlled by Dell Technologies (DELL) . So is Pivotal. As part of that deal, VMware will have to exchange VMware B shares for the Pivotal shares held by Dell.

VMware will have to commit $2.8 billion in cash toward these two acquisitions. The cash to do this is available, according to the balance sheet. The rest will come from short-term debt. On top of this, apparently, as mentioned by Jim Cramer Thursday night, the company has a "great relationship" with Amazon (AMZN) , while according to Barron's, it has learned to "play nice" with Alphabet (GOOGL) ) The value added through these relationships cannot be understated if one is targeting a business cloud clientele. 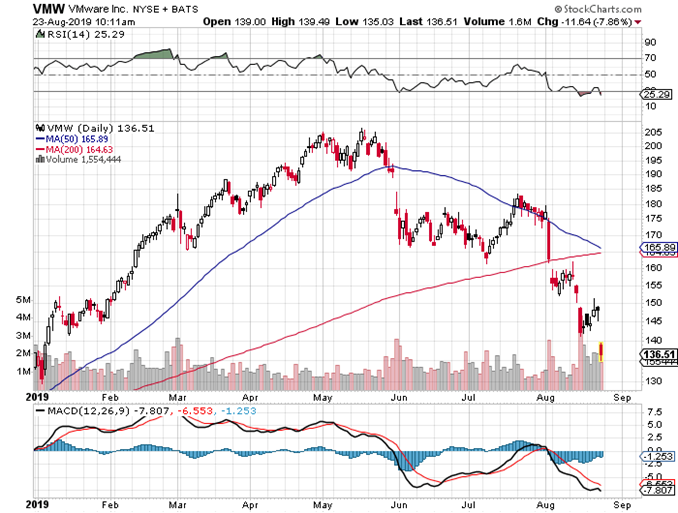 Simply put, this is an awful chart.

Relative strength? Below "oversold". Daily MACD? Like something out of a monster movie. The shares? Down 34% since May.

See the 50-day simple moving average ($165.89) converging on the 200-day SMA ($164.63)? That crossover, when it happens, is what we call a "death cross." It's a bearish signal, and when it occurs, I would think that there could be an algorithmic negative market response. There could be one more leg lower.

All this said, I have noticed 13 analysts come out and say something in response. One Hold. One Sell. Eleven Buys. All 11 Buys come from either four or five-star rated analysts.

The average price target of those 11-plus the Hold (also a five-star) is $182.18. I think I agree. I plan to enter into a long position Friday) at entry level size, and if the death cross does provoke the algos, I plan a second tranche.

Get an email alert each time I write an article for Real Money. Click the "+Follow" next to my byline to this article.
TAGS: Mergers and Acquisitions | Investing | Stocks | Technical Analysis | Software & Services