Poonen said technology transformations only come along once every 10 to 20 years, so when you see one, you need to pounce on it. The current transformation in cloud computing is what's called containers -- applications that can be easily moved from place to place -- and the acquisition of Pivotal helps VMware own this space. The second acquisition was Carbon Black, a cybersecurity platform that VMware plans to add to its offerings.

Combined, Poonen said these two acquisitions will add $1 billion in revenue at VMware over the next two years. As a combined entity, the companies will accelerate VMware's go-to-market strategy and build the next generation of cloud-computing applications.

Let's go to the charts to see what they look like.

In this daily bar chart of VMW, below, we can see that prices turned lower in late May and made lows in early July and late August. The low in August looks different and more important. Prices are still below the declining 50-day moving average line and below the cresting 200-day line, but notice the heavier trading volume last month. This surge in volume can mean a shift in ownership from weak hands selling to stronger hands accumulating.

Now look at the movement of the On-Balance-Volume (OBV) line from May. The line dips in June but then firms again, suggesting the buying on weakness by investors looking ahead one or two quarters. The Moving Average Convergence Divergence (MACD) oscillator crossed to the upside in late August, signaling a cover shorts buy signal.

In this weekly bar chart of VMW, below, we can see the decline from May was deeper than the previous corrections. Prices are below the declining 40-week moving average line. The weekly OBV line has been mostly stable from May, suggesting that there was little liquidation or selling. The weekly MACD oscillator is now narrowing toward a future crossover signal.

In this Point and Figure chart of VMW, below, we can see that an upside price objective of $191 has been projected. Not new highs, but a strong more up nevertheless. 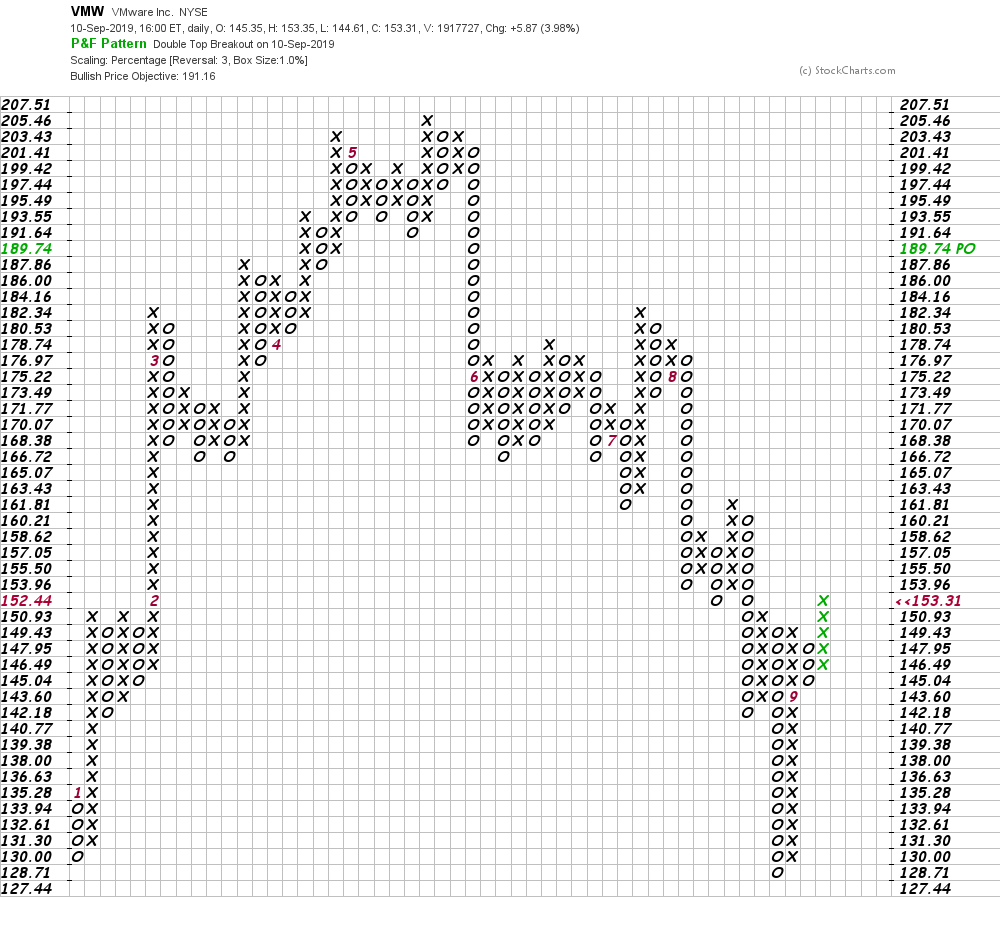 Bottom line strategy: VMware has moved up sharply in recent sessions. This could continue, but at some point, maybe soon, we should see a temporary pullback or a perhaps a test of the August low. Buyers should consider using that dip to buy or add to longs.

Get an email alert each time I write an article for Real Money. Click the "+Follow" next to my byline to this article.
TAGS: Mergers and Acquisitions | Investing | Stocks | Technical Analysis | Software & Services | Technology | Mad Money | Executive Interview | Real Money