For his first Executive Decision segment of "Mad Money" Thursday, Jim Cramer spoke with Bob Bakish, president and CEO of Viacom Inc. (VIAB) , which just reported its final quarter as an independent company before its planned merger with CBS Corp. (CBS) . Shares of Viacom, which is a holding of Cramer's Action Alerts PLUS charitable trust, rose by 1.9% on Thursday.

Bakish said Viacom was able to deliver on all its promises for 2019 and it looks forward to the CBS merger, which is expected to close in early December. Once complete, he said, the combined company will have one domestic advertising sales team, one delivery arm and one product licensing team across all its properties, which will include CBS, Paramount, Comedy Central, MTV and many others.

When asked about the merged company's strategy, Bakish said it will continue to distribute its content broadly as part of bundled cable TV, but also via multiple streaming services, including its own. He also said was not worried about the combined comany losing its partnership with the NFL, noting that CBS is an integral part of producing high-quality content for the NFL and is also a big part of the NFL's distribution plans.

Shares of Viacom trade for just 5x earnings. Let's check out the charts.

In this daily bar chart of VIAB, below, we can see that prices have been in a downtrend from early part of August, when the merger deal was announced, until late October. Prices have bounced so far this month. VIAB tested the underside of the declining 50-day moving average line. The trading volume has been heavy since the middle of August as investors and probably arbitrage players have been active.

The daily On-Balance-Volume (OBV) line has moved up and down with the price action since August, so it is difficult to figure out which side is more aggressive. The trend-following Moving Average Convergence Divergence (MACD) oscillator gave cover shorts buy signals in September and early November, but an outright go long signal is not in the cards right now.

In this weekly bar chart of VIAB, below, we can see that prices have been weak as they are trading below the declining 40-week moving average line and have retested the lows of late 2017. The weekly OBV line shows a decline from September, telling us that sellers have been more aggressive. The MACD oscillator is in sell territory below the zero line, and while the two moving averages of the indicator are narrowing a cover shorts signal may not mean much if this deal closes by year-end.

In this Point and Figure chart of VIAB, below, the chart suggests we could rally to the $27 area, but the chart does not know that this merger with CBS is likely to keep prices about where they are. 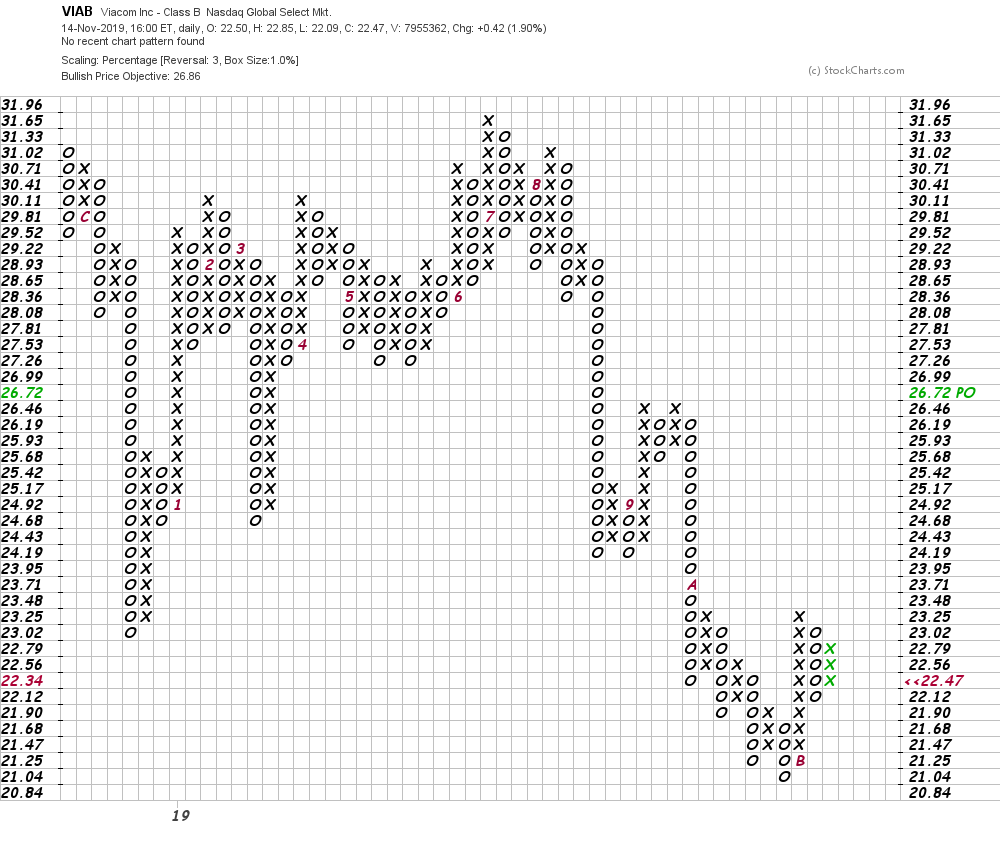 Bottom line strategy: Traders should find another stock to trade as the price action into year-end is probably going to be decided in a boardroom or by a regulator.