By BRUCE KAMICH Aug 27, 2019 | 10:36 AM EDT
Stocks quotes in this article: VZ
During Monday's Mad Money program Jim Cramer said that given the current environment investors need to lighten up on the industrials and swap into stocks that are less cyclical, like Verizon Communications Inc. ( VZ) . He also advised to raise cash to about 10% of your portfolio so you'll be well positioned to buy during the next market decline.
Let's pay a visit to the charts and indicators of Verizon.
In the daily bar chart of VZ, below, we can see that prices have formed what I believe is a large equilateral triangle formation -- there is a rising trend line from late January to early August and a declining trend line from late March to May to now. Use your imagination. It is hard to say that the trading volume has diminished during this pattern, which is typical. However, we can see that the On-Balance-Volume (OBV) line has declined from late May.
The Moving Average Convergence Divergence (MACD) oscillator has been crisscrossing the zero line the past few months suggesting little trend strength.

In the weekly bar chart of VZ, below, we can see that prices have been in a sideways trading range for several months. Prices are testing the underside of the cresting 40-week moving average line.
Weekly trading volume has been weakening since December and the OBV line shows a peak in November. The MACD oscillator is testing the zero line after a declining phase from December.

In this Point and Figure chart of VZ, below, we see two clues. The chart is projecting a potential upside chart target of $62.62 and we can see that a trade at $53.62 will probably weaken this chart. 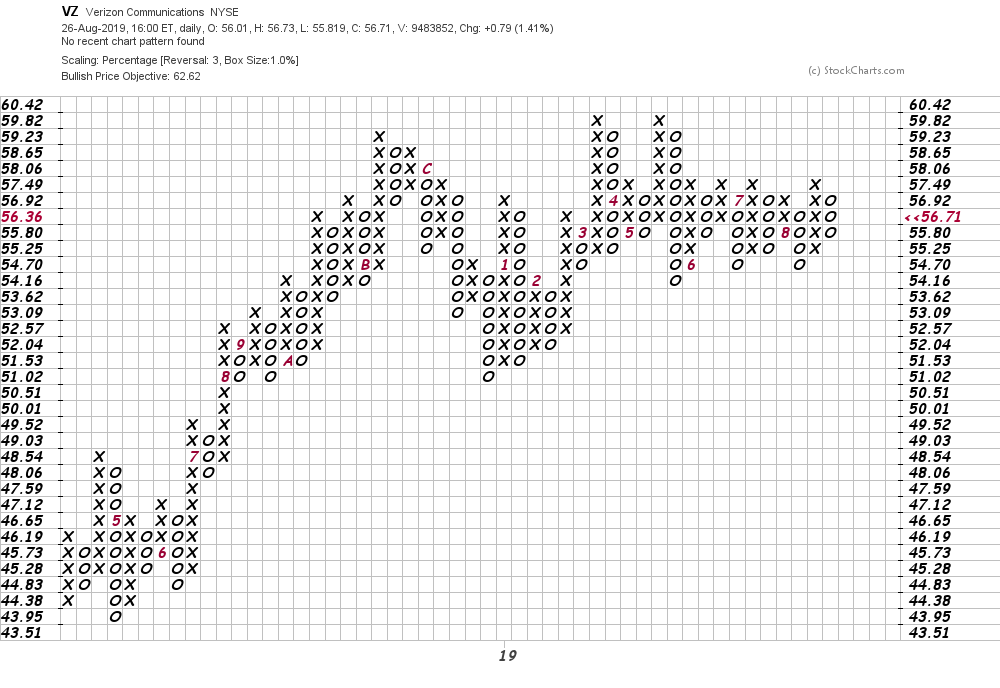 Bottom-line strategy: Traders should risk a close below $54 and add to longs above $58 looking for gains to the mid-$60s in the months ahead.

Get an email alert each time I write an article for Real Money. Click the "+Follow" next to my byline to this article.
TAGS: Investing | Stocks | Technical Analysis | Telecommunications | Mad Money | Telecom Services

United Parcel Service Is Likely to Resume Its Advance