Monday. What a day. Extremely high trading volumes. By day's end, what had been a very strong day across the board had become a very mixed day. In fact, the day could have a very confusing feel to it if one were to just brush off the session without taking time to try to discern what just took place.

We all know by now that there was a catalyst for the broad market reaction, the apparent efficacy and safety of the first of four Covid-19 vaccine candidates, this one under the collaborative development of Pfizer (PFE) and BioNTech (BNTX) .

This truly wonderful news had even the usually cautious Dr. Anthony Fauci (director of the National Institute of Allergy and Infectious Diseases) saying, "We may have doses that we are able to give to people by the end of November, the beginning of December, probably well into the December," in an interview aired on CNN. Fauci also sounded upbeat about the potential for soon being able to add mRNA-1273, the vaccine candidate developed at Moderna (MRNA) , to the nation's anti-Covid portfolio.

The algorithms that control modern price discovery kicked into overdrive. Sure, cyclicals, or reopening type names took the lead, but everything was strong... until it was not. The tide turned with a vengeance, first on those names that had most benefited from a pent-up society. They sold internet types, they sold software, they sold staples. By day's end they even took profits across many of the winners.

Oddly enough, breadth looked good across the entire marketplace. At the New York Stock Exchange, winners beat losers by almost 4 to 1, while advancing volume beat declining volume by more than 6 to 1. At the Nasdaq Market Site, winners beat losers by almost 2 to 1, on advancing volume that beat declining volume by a rouh 7 to 4. Funny thing though, by every measure, equity markets finished Monday's regular session at the very bottom of the day's range. Even supported by better-than-normal looking breadth, the Nasdaq Composite (-1.5%) and Nasdaq 100 (-2.2%) closed lower for the session. Four of the 11 sectors closed in the red.

What to Make of This?

Difficult question. Really. More difficult than you might think. Not so much for the Dow Industrials or the S&P 500. The Energy and Financial sectors absolutely ran wild on Monday. The reasons for that are clear. Human beings, with a little luck, will be mobile sooner than had been priced in. While this ramps higher demand for energy, it also pushes out the long end of the Treasury yield curve on suddenly mispriced expectations for economic activity. Understand, while this is exactly what we wanted, this will also change how investors must behave and how they will position themselves.

Suddenly, increased demand based upon freedom in movement turns not only energy stocks back into businesses, but marine transport, the airlines, the rails, and lodging as well. A steeper yield curve allows for suddenly positive adjustments in valuation to be made to banking stocks.

How far can the winners fall? Capital has to flow into these groups should society seek a new normal. This capital ether has to come from cash or be created through the sale of something else. That's probably at least a short-term negative for assets that have been profitable this year. Value/reflation stocks must take something from growth. Crude and copper must take something from gold, silver and yes, even bitcoin.

One more important item to remember. Actual economic activity also makes fiscal support less urgent in the eyes of legislators. There will be something, but it will be smaller than thought, even after the election appeared to shade red beneath the top of the ticket. This could in the medium-term mean less supply at the long end of the curve, potentially higher borrowing costs, and yes, perhaps even deflation or disinflation based on a stronger dollar, if the U.S. is able to escape the pandemic ahead of other Western nations.

So, is this the rotation that finally sticks? It could be. Gee, thanks Sarge. What I mean is that this would not surprise.

I'll tell you how I acted on such a day, as actions speak louder than words anyway. I did not buy a single share of stock on Monday. Not one share. I had recently used industry weakness to bring both JPMorgan Chase (JPM) , and Southwest Airlines (LUV) , my favored bank and airline, up to full strength.

What did I sell on Monday? I took off a third of my core position in Amazon (AMZN) , I cut my Peloton (PTON) long in half. and I got completely out of Veeva Systems (VEEV) earlier in the day. I did not make well-executed sales in these names, but by day's end there was no doubt that at least the right (short-term) decision had been made. I gave serious consideration to reducing Nvidia (NVDA) and Advanced Micro Devices (AMD) but bit the bullet (hung onto) on those, figuring that the semis would do better than software as economies reopen and relations with China likely improve. 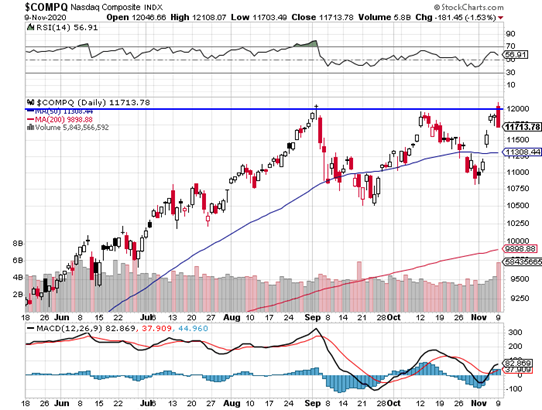 Just 24 hours ago, I showed you this chart as optimistic. The Nasdaq Composite had increased on five consecutive sessions in rising trading volume, while appearing to take an obvious pivot point. What a difference a day makes.

After trading as much as 1.8% higher for the day, the Nasdaq Composite ended the day down 1.5% on incredible volume. Yet, as I told you, most of that volume occurred on the plus side, prior to the selloff. What to make of that? What we have is known not just as an "Outside Day," but an "Outside Reversal," and these can be dangerous.

Monday's candlestick (range) is considerably longer than either of the prior two days. This speaks to expected volatility for this index. In addition, the gap created post-election has not yet been filled. I would expect to see that happen early this week. While both Outside Days and Inside Days usually signal continuance of trend, when there is a high volume reversal of trend involved, the ice traders skate upon thins. Not that this necessarily means that all traders will fall through the ice, but that most traders for at least the immediate future will seek thicker ice to skate on until they know more for sure.

Apple (AAPL) holds another launch event on Tuesday. The "One More Thing" event (and wow are we getting sick of these) is expected to feature new company-specific silicon chips based on designs created at Arm Holdings. The big takeaway will be the increased power on improved battery life. Apple will launch a new line of Mac computers that use these chips and will (again) make public the intent to shift all Macs toward the company's own chips over the next couple of years.

Speaking Of Going It Alone...

Both McDonald's (MCD) and Beyond Meat (BYND) reported quarterly numbers on Monday. The numbers were not the headline, though.

Though the results were solid for McDonald's and less than sensational for Beyond Meat, the headline came out of the McDonald's event. The company announced that the chain will begin testing the "McPlant," which will be a plant-based sandwich of its own creation.

What had already been thought of, and became instantly apparent, was that investors had hoped that a fast food chain such as McDonald's would take on a plant-based faux meat supplier such as Beyond Meat. BYND traded 4% lower on Monday and is now another 18% lower overnight after recovering some significant ground after an initial pummeling. There may be some opportunity here for investment but the trade, or at least the opportunity for a risk averse trade, may have passed.

Get an email alert each time I write an article for Real Money. Click the "+Follow" next to my byline to this article.
TAGS: Earnings | Futures | Investing | Markets | Politics | Small Cap | Stocks | Trading | Value Investing | U.S. Equity | Coronavirus