Friday. Friday morning. Still early. Still dark, so dark.... a blackened window offers not a hint. I know you are out there. Nightly companions, the streetlight visible from the desk of the older but still developing man is out. As is the neighborly porchlight across the lane. The rains have passed. The one who kids himself to be half intellect only to realize that the other half must be left to play a fool has rushed outside, into the night air. The creatures of the night scurry off. They are, however, all still there. Watching.

Venus. Mars. The creatures. Silent. Just the man in a dark suburban driveway. He, himself, still just half of what he might become or could be, will stand upon the earth this day. Not lie beneath. He has been granted the greatest of gifts. Opportunity. Love returned. A chance to be a positive impact. Upon someone else, anyone else. Once again. Will he be selfish? He can be, if he tries not. Chance squandered? Challenged? Did you think it would be different? Ahh, you see, after all, you do understand. Free will.

Volatile day, Thursday. Sure, equities got off to a strong start, a start that lasted most of the day. Thanks to the Fed chairman, Jerome Powell. Thanks to the federal government's $750 million deal to purchase from Abbott Laboratories (ABT) 150 million rapid (15-minute) Covid-19 tests for which Abbott to its credit is not overcharging the government. This test, which on Wednesday was granted an emergency use authorization, or EUA, by the Food and Drug Administration (FDA), could be a game changer in greatly expanding testing and reopening society.

Markets seemed to be sailing smoothly, at least equity markets. Are debt markets riskier than equity markets? Asking for a friend. Then some negative vibes crept into our general consciousness. News broke that while both Moderna (MRNA) and Pfizer (PFE) draw closer to what could be a safe and effective Covid-19 vaccine, and we all know that the president has charged the military with broad distribution once such a vaccine is at hand, that these vaccines must be stored at extremely cold temperatures. The Moderna candidate must be stored at -4 F, while both of the Pfizer/BioNTech (BNTX) candidates must be stored at an incredible -94 F.

I have spent a little time in logistics. Now grant you, I have never been in command of anything large, but if we have anything mobile that stores large quantities of goods at temperatures like that, I have not seen it. Then again, I hated logistics, and was very happy once they let me return to living among my people in the wilderness. It got worse. Nancy Pelosi, speaker of the House of Representatives, openly expressed negative sentiment regarding legislative compromise in putting together a next-phase fiscal support package after a 25-minute phone call with While House Chief of Staff Mark Meadows. Traders took profits ahead of the bell.

Blood on the Trail

Four things one never travels alone in the forest without. One, a map. Two, a signal mirror. Three, a whistle (didn't think of that one, did you?). And four, a flashlight (red lens with morse code buttons if unsure about who is in the neighborhood). Oh, there's other stuff, too. You do need two sources of water, the ability to create heat, and more blah, blah, balh.

In this forest we don't track our prey following footprints or looking for unnaturally broken vegetation. We do hunt. We use data.

Though the S&P 500 did manage to post yet another record close, the day had a different look. Higher yields for longer-termed U.S. Treasuries steepened the yield curve. This put the banks in charge as the financials uncharacteristically took the mantle of leadership. The Communications Services sector finished the day in last place, or in 11th of 11 sectors, led lower by Internet names. Really. True story.

One thing Jerome Powell is great at is not surprising the marketplace. On Thursday morning, the Fed chairman revealed a new strategy for targeting consumer-level inflation that had been well-telegraphed ahead of time and predicted by just about everyone in the industry. The new approach for those who spend their free time watching "90 Day Fiance" is this: The central bank will permit inflation to run hot if it will do so for a time in order to make up for long periods where inflation had undershot its longtime 2% target.

This strategy not only allows the economy to grow, it allows the Fed to remain ultra-accommodative while inflation and growth get reacquainted. Basically, the Fed is telling you that it is going to keep short-term rates close to where they are now for an extended period, most likely expanding the balance sheet (perhaps significantly) even from this level in order to do so. What this did on Thursday was force some selling pressure onto the long end of the yield curve. This creates valuation for banking stocks.

Readers will note that the spread between yields for three-month Treasury bills and 10-year Treasury notes --the single most-important spread we have -- not only has moved toward two-month highs but for the first time since May has found support at its own 50 day simple moving average (SMA).

The Fed will need to word this correctly in the September policy statement. My guess is that numerical specifics are left out of that text. The dangers? To individuals reliant upon fixed income or unable to generate increased revenue, I think obvious. To the economy as a whole? The potential for sustained inflationary overshoot that forces the central bank to tighten policy before it is ready, before the economy is ready. That said, this method in this environment is understandable, and not incorrect at this point. I am being critical now. I will not jump on the bandwagon later if this backfires.

Who expected Walmart (WMT) to announce that it had teamed up with Microsoft (MSFT) to bid for the U.S. operations of the TikTok app operated by the Chinese parent firm ByteDance? Not me, though being long both of those names and a well-known Walmart fan I am not complaining. Not one bit. Not when the news provides a name that has underperformed since earnings were released on Aug 18 with a second chance at a technical breakout. Check this out... 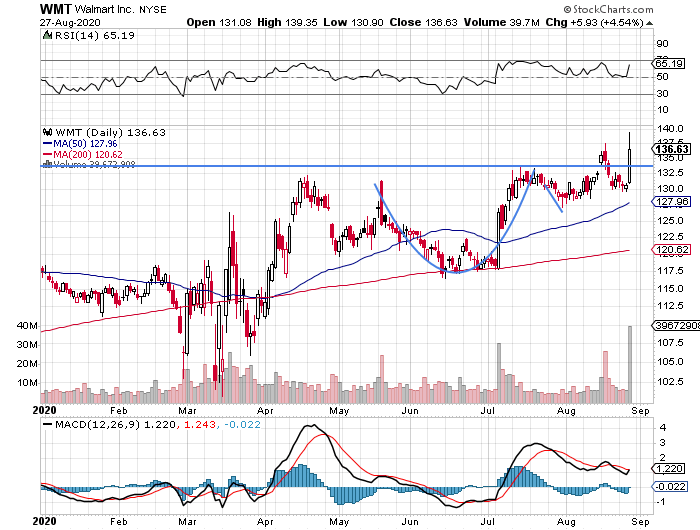 I know, I know. Ulta Beauty (ULTA) will steal the headlines on Friday morning. Perhaps we'll cover that later for Real Money, or maybe we'll do Marvell Technology (MRVL) . That could be an interesting story to write. Way under the radar, a name that I cover fairly often but I never hear about elsewhere, cloud-based software provider to the life sciences industry Veeva Systems (VEEV) reported second-quarter numbers Thursday night.

You guys getting this? This company is like Wade Boggs in his prime. Consistent. The shares closed at $270.22. The recent high is 274.33. Overnight the shares are trading with a $276 handle.