The overt pressure could be felt across the trading floor. As equities wound into Thursday night's close, the grind was lower. The rush was to hit the next bid. Whatever bid traders might have left exposed. Stocks broadly closed at their lows for the session, after a failed attempt at a rally just before midday.

Last train to Clarksville? No catchy tunes here. No Mickey Dolenz. No Monkees at all. Just blood on the floor. In fact, if the session revealed any composition at all, one might say that the day presented with all of the harmonic texture of two angry monkeys engaged in a slap fight. It's okay if that last train left without you.

A certain level of raw emotion was visible in the marketplace on Thursday. Apple (AAPL) can do that to folks. The name is broadly held by professionals and home-gamers alike. The ISM Manufacturing survey did not help one bit, and seemed to confirm what we already knew after the regional Fed manufacturing surveys poured in from New York, Richmond, Kansas City and Dallas.

Growth had slowed mightily for New Orders, while order backlogs had not grown at all. Dangerous. Even employment and pricing had come off of lofty perches. Had a global economic slowdown finally come home to roost? We already know that while consumers had enjoyed the holiday season, forward-looking confidence surveys have displayed a serious lack of any permanence to that state of elan.

No wonder. While those consumers had, for the most part, experienced a higher level of job security coupled with increased wages, their retirement accounts have taken a beating, and those residing in blue states face a daunting tax season to say the least, if they own property.

This morning, Fed Funds Futures trading in Chicago are pricing in a 0% chance of any rate hike through year's end. (Yes, I know that this is only the fourth day of January), as well as a 44% chance of a rate cut some time in 2019. Actually, those futures markets are pricing in about a 10% chance of more than one cut, and these probabilities are actually more "hawkish" than they were Thursday night, as that train was leaving the station.

The reason for this slightly "less dovish" outlook, and the overnight rebound both in global stock markets and domestic equity index futures is that the Chinese Commerce Department has confirmed that there would be a meeting in Beijing this Monday and Tuesday at the Vice Ministerial level with their U.S. counterparts.

In addition, in China, the PBOC has announced that it will cut Reserve Ratio Requirements for Chinese banks by 100 basis points in two equal tranches planned for the 15th and 25th of the month. The idea there is to ensure that there will be no issues regarding liquidity during the Lunar New Year. The year of the Pig officially begins on February 5. However, preparations begin on January 28, and the "Spring Festival" culminates with the "Lantern Festival" on February 19, so if one is not familiar, this is a much bigger deal in Asia than what we in the west think of when we think of a New Year's celebration.

This morning, Treasuries have at least sold off a bit from Thursday's harrowing moves. The two-year and the five-year remain inverted, but at least have moved away from the three-month T-bill, even if only leaving breathing room of a couple of basis points. The much focused upon 2-year/10-year spread had moved back toward a whopping 18 basis points. I would prefer something around 125 basis points, but as we all know, the Federal Reserve elected not to repair the yield curve ahead of attempting to normalize monetary policy. That was clearly unwise, and will eventually force lower not just growth, but demand in general, to include labor.

In just a few hours, investors and economists alike will peruse the December Employment Situation as the BLS goes to the tape with their numbers. A short while later, Jerome Powell will participate in an economic panel with his predecessors at the head of the central bank... Ben Bernanke and Janet Yellen. I would love for them to pose for a group photo, with each one of them with their own hands covering either their own eyes, ears or mouth. But what we really need to hear is something that displays at least an elementary level of situational cognizance from the current chair.

The wildcard will be if the sudden slowing of growth in manufacturing employment is emblematic of a broader problem. That would cause risk to the downside in Friday's BLS data, unless the rest of the economy was able to absorb any slack created. This could embolden the chair, who has not yet really acknowledged potential (probable) policy error.

What I need to hear is some signal that the balance sheet roll-off program (quantitative tightening) is flexible, and not just on auto-pilot, because one thing is quite clear to anyone with a pulse. That program is withdrawing liquidity far more quickly than that liquidity was ever added, and that program is certainly not running quietly in the background. Those slap fighting monkeys await further instruction.

There is no doubt in my mind that holding physical gold is a superior, and safer way to invest in the one alternative currency that will still exist when the lights go out. But that is not, in my opinion, how one should go about trading gold. In fact, the best way to do that, or to manage the tip of the spear when adjusting one's overall exposure to the space, would be through gold futures or an ETF such as SPDR Gold Shares ETF (GLD) .

Just to be clear, this is about trading and risk management. On the day that the lights go out forever, positions in the ETF or gold futures won't do the individual any more good than their favorite cryptocurrency, but actual gold might be useful. Physical gold will also be useful as a store of value on the day that misguided policies result in a failure of faith in fiat currency. Just make sure that it's not stored a thousand miles away.

All that aside, as the U.S. dollar has finally taken a breather, GLD has been on the rise. With equity index futures responding well to news out of China, and news imminently due from the Bureau of Labor Statistics, as well as the Fed Chair himself, is there still opportunity here? Has that ship sailed? Let's take a look. 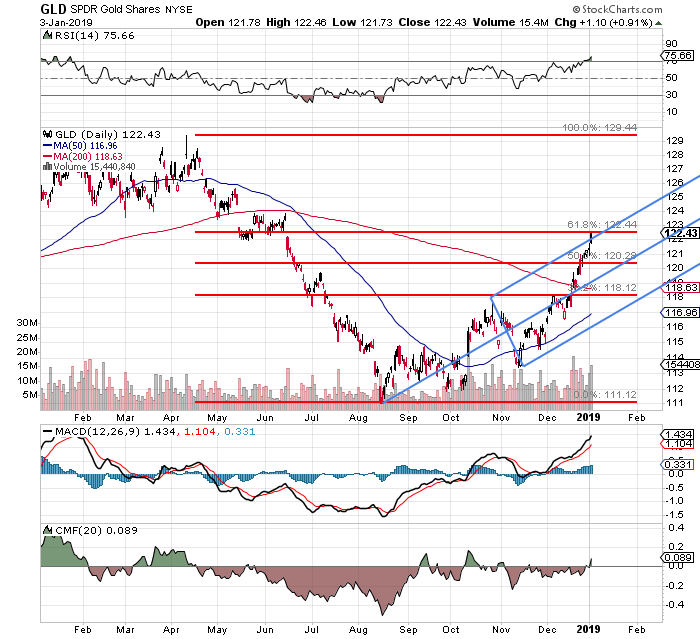 How interesting. As fear surged in late Thursday trading, so did the last sale of GLD. Just as interesting, as equity index futures indicate a higher open Friday morning, the last sale is off a bit. What the chart immediately reveals is that Thursday's closing price left GLD at both a 61.8% retracement of the April through August selloff, and simultaneously at the upper trend line of the August through the present Pitchfork model.

Obviously, those two observations, on tops of Relative Strength of more than 75, and a daily MACD that has not offered an overt sell signal since October, would normally indicate resistance. Expect to see some ahead of Powell's appearance. In addition, watch the converging 50-day and 200-day SMAs, currently only $1.67 apart after being about $4 apart just a month ago.

A "golden cross" (no pun intended) might be what this market needs to punch through. Like I said, this is not about physical gold. As for this ETF, if one is long (and I am), this is the likely destination to take some short-term profit. Frankly, I would not take it all off this morning, as Powell is no Mario Draghi when it comes to soothing markets.

Should Powell incite panic later today, this fund could resume its march toward the highs of last April on resumed dollar strength. Should Powell give markets the juice they crave, the add here is between $120 and $118.