United Technologies Corp. (UTX)  on Wednesday reported fourth-quarter non-GAAP earnings per share of $1.95 for a beat of $0.40; GAAP EPS were $0.83. Revenue was $18.04 billion, up 15% year over year and a beat by $1.22 billion. So, good numbers from a fundamental viewpoint. What do the charts and indicators tell us here on Thursday morning about United Technologies, which earned a mention from Jim Cramer in his opening column?

In this daily bar chart of UTX, below, we can see a rally from early May to late September, followed by a decline into late December. Prices have improved in recent weeks and so have the indicators. UTX closed right on the declining 50-day moving average line and could well close above it here on Thursday. The rally from late December has nearly retraced 50% of the decline, so we are close to putting the bulls back in control when we retrace more than half the slide.

The 200-day moving average line has a negative slope and intersects around $126. Chart resistance begins around $120 and runs up to $132 or so. We can see a volume surge in late November and late December, which could be "throw in the towel" selling. As prices have turned up from late December the daily On-Balance-Volume (OBV) line has also improved, suggesting that buyers of UTX have become more aggressive. The trend-following Moving Average Convergence Divergence (MACD) crossed in early January, signaling a cover-shorts buy signal. This indicator is close to crossing the zero line for an outright go-long signal.

In this weekly bar chart of UTX, below, we can see an impressive rally until September of last year. Prior to this recent bout of weakness the pullbacks and corrections were relatively shallow and short in duration. Is the recent deeper and longer decline a sign of something more serious? Let's look closer. Prices are below the declining 40-week moving average line, but it looks like it has begun to flatten. A weekly close above $126 would break the decline. The weekly OBV line shows a decline from September but an uptick from the middle of December; this is promising. The weekly MACD oscillator has been narrowing for several weeks and soon could cross for a weekly cover-shorts buy signal.

In this Point and Figure chart of UTX, below, we can see an upside price target of $135.90 projected. 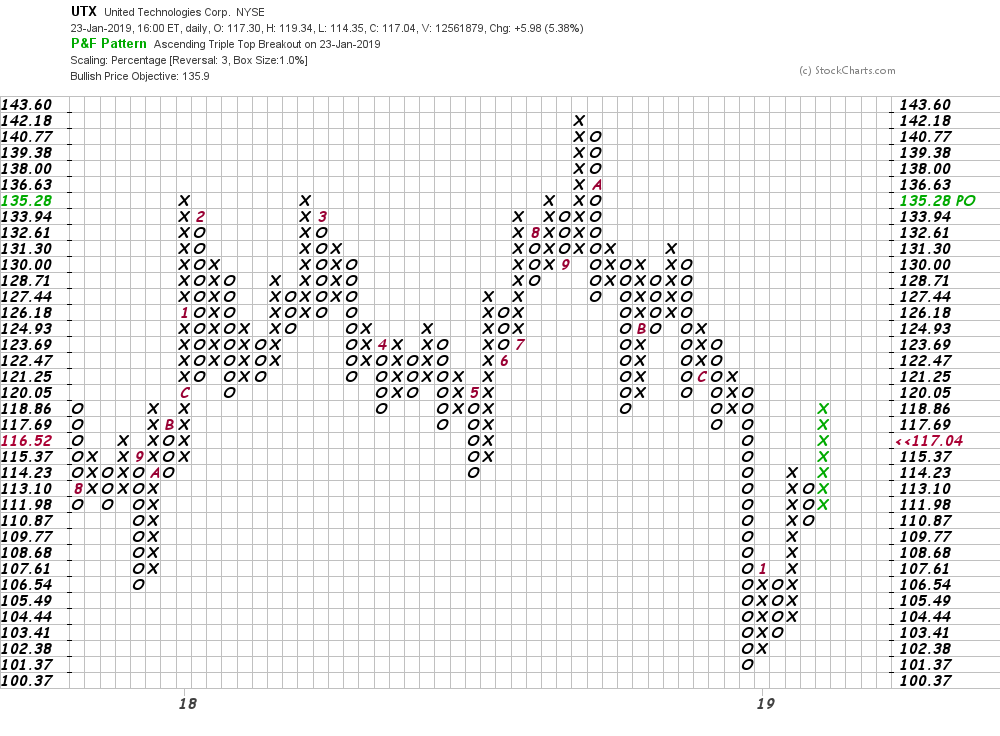 Bottom line strategy: The share price of UTX has recovered nicely the past few weeks. Some traders may be waiting for a retest of the December low before buying, but I think they will miss out on the strength ahead. Traders looking to go long UTX could buy below $120 if they can risk below $110. Our first upside price target is $136.

Get an email alert each time I write an article for Real Money. Click the "+Follow" next to my byline to this article.
TAGS: Investing | Stocks | Technical Analysis | Aerospace | Defense | Technology | Industrials | Real Money

Sutter Rock Capital Corp. is now called SuRo Capital Corp., but still offers investors a way to play the pre-IPO market and collect a yield of 4.2%.

Universal Stainless & Alloy Products Is a Stock Worth Following