For his first Executive Decision segment of "Mad Money" Thursday, Jim Cramer sat down with Michael Kneeland and Matthew Flannery, the exiting and incoming CEOs of United Rentals Inc. (URI) . The equipment rental concern just posted a strong fourth quarter that included a 27% rise in revenues.

Kneeland said United Rentals continues to grow because the sharing economy continues to make renting equipment a far better option than owning it for more and more customers. That's part of the reason why United Rentals' customer base keeps diversifying.

Flannery said United Rentals also is on the acquisition trail, making nine deals over the last 24 months. Despite all those acquisitions, United Rentals' leverage remains at the bottom of its range at just 2.5%. The fundamental story sounds good and Cramer continued his recommendation of the company. Let's round out the analysis with some charts and and technical indicators.

In this daily bar chart of URI, below, we can see both a decline from March to December but also a basing pattern from October. Let's focus on the action from October. Notice the heavier trading volume the past four months? This looks like a change of hands with weak sellers dumping shares and stronger hands buying. Indeed, the daily On-Balance-Volume (OBV) line has stabilized the last four months and has turned up from late December, signaling more aggressive buying.

URI has rallied above the bottoming 50-day moving average line, while the declining 200-day line would be broken by a rally to the mid-$140s. The Moving Average Convergence Divergence (MACD) oscillator has improved the past three months with a crossover cover-shorts signal in early November, and this month with a cross of the zero line and an outright buy signal.

In this weekly bar chart of URI, below, we can see some technical improvement. Prices are still below the declining 40-week moving average line. The weekly OBV line shows more signs of aggressive buying and the weekly MACD oscillator has crossed to the upside from below the zero line; this is a cover-shorts buy signal or a buy in a downtrend.

In this Point and Figure chart of URI, below, we can see the projection of an upside price target of $146.47. 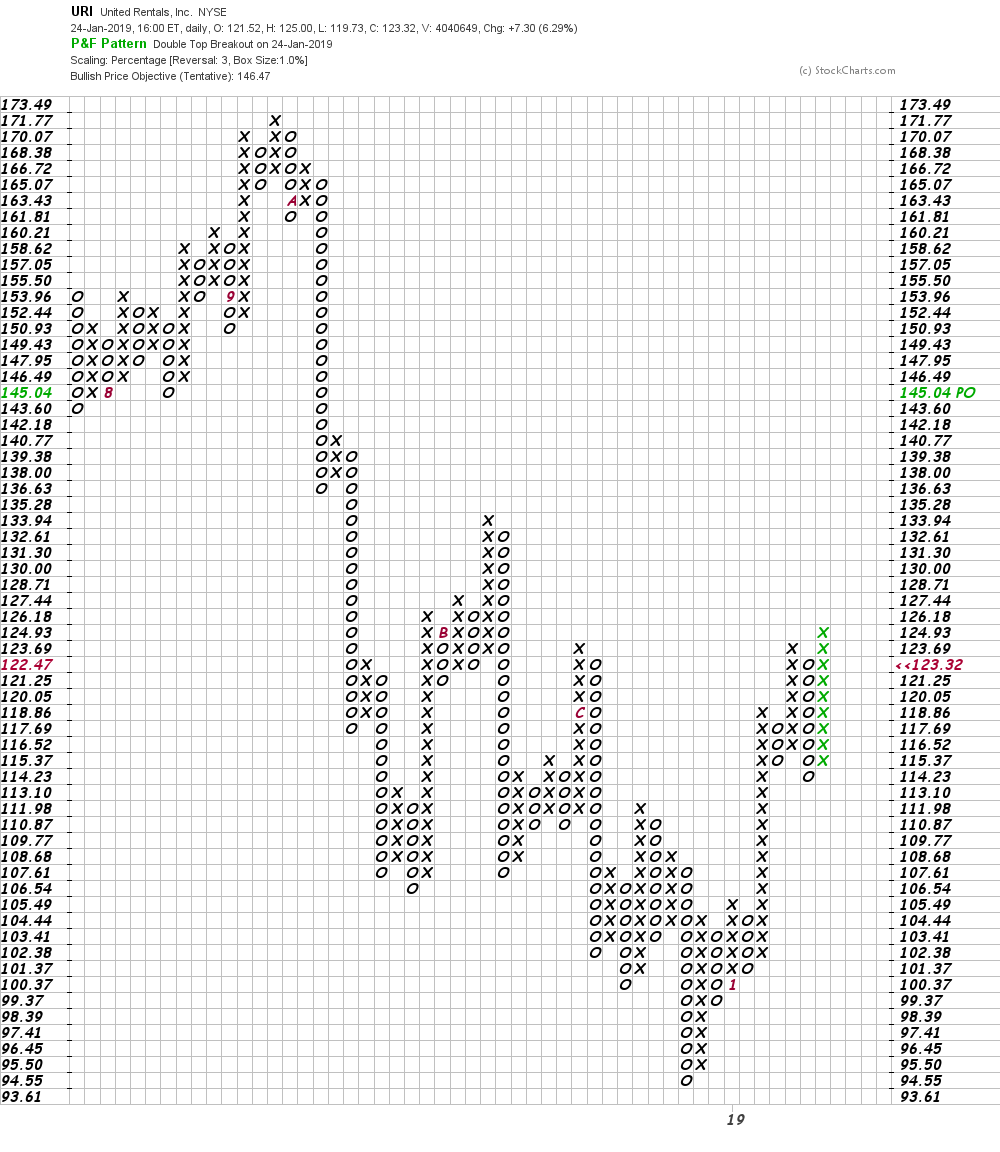 Bottom line strategy: United Rentals has been showing basing action on the chart the last few months. We have an upside price target of $146 from our Point and Figure chart, but I would feel more confident of the upside if URI developed a wider base.

Get an email alert each time I write an article for Real Money. Click the "+Follow" next to my byline to this article.
TAGS: Investing | Stocks | Technical Analysis | Construction & Engineering | Mad Money | Executive Interview | Real Money