In his "No-Huddle Offense" segment of  Mad Money Wednesday night, host Jim Cramer said with China coming back online, there are lots of opportunities being created. He was bullish on United Parcel Service (UPS) and several other companies.

Let's start with a look at the charts of UPS.
In the daily bar chart of UPS, below, we can see that prices declined from November to the first half of March. Prices rebounded in March to retest the underside of the declining 50-day moving average line and now it looks like UPS will close above this line. The declining 200-day moving average line intersects up around $111 or $112.
Trading volume has been heavier than average from late February and the On-Balance-Volume (OBV) has been stabilizing since late February suggesting that UPS had declined to a level that attracted buyers again.
The 12-day price momentum study in the lower panel shows equal lows in early February and early March even though prices made much lower lows. This is a bullish divergence and helps to foreshadow the coming reversal to the upside this month.

In the weekly bar chart of UPS, below, we can see some "green shoots" in the price action. If you draw a line along the lows of early and late 2018 it should connect with the low this year. This would be the bottom end of a large downward-sloping channel.
Trading volume was heavy the past two months suggesting a potential change in ownership from weak hands to stronger hands. The 40-week moving average is pointed down but the weekly OBV line shows some stability and the MACD oscillator has been narrowing toward a possible cover shorts buy signal.

This daily Point and Figure chart of UPS, below, projects an upside price target of $120. 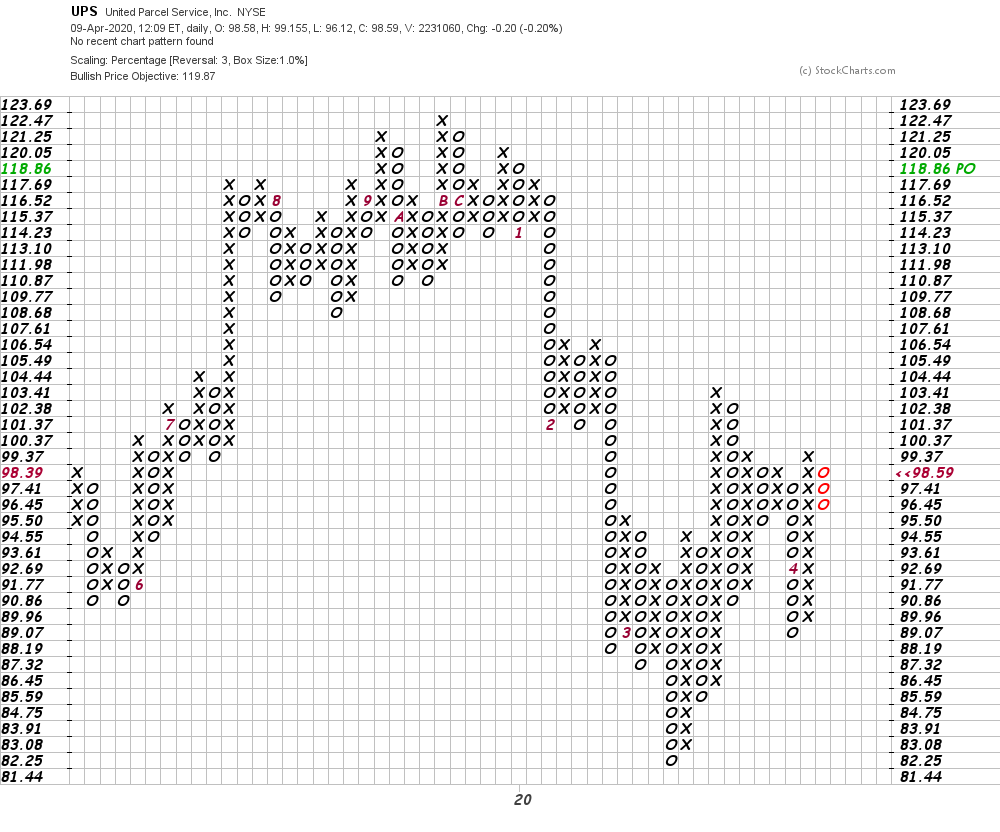 Bottom-line strategy: Risking a close below $87, traders could go long UPS at current levels and on strength above $100. The $120 area is our first upside price target.
Get an email alert each time I write an article for Real Money. Click the "+Follow" next to my byline to this article.
TAGS: Investing | Stocks | Technical Analysis | Transportation | E-Commerce | Mad Money