United Airlines Holdings Inc. (UAL)  has announced a potential layoff of 36,000 frontline employees in October. The terms of $25 billion in federal aid prohibit airlines from laying off or furloughing workers until Oct. 1. It seems airlines are urging employees to take buyouts or early retirement packages to avoid involuntary cuts.

While we all privately hope for a return to travel and vacations and maybe even business trips, this news from UAL is a reminder that things are not so rosy when it comes to the airlines.
Let's check out the charts as part of our pre-flight routine.
In the daily bar chart of UAL, below, we can see that the stock made a hard landing from November to March. UAL bounced in late March but eventually retested the March low in May. Prices rallied dramatically into early June and more than doubled but the advance did not have staying power and prices retraced half of the rally. UAL is testing the rising 50-day moving average line and could well close below it today.
The trading volume has been growing sharply from early March and looks like it has attracted short-term traders rather than investors. The volume at the March low should have been the volume peak if it was a classic bottom with weak hands selling out to strong hands. Unfortunately, the heaviest volume seems to have been during the May-June runup.
The On-Balance-Volume (OBV) line moved straight up from May to June telling us that buyers were more aggressive. Unfortunately, the OBV line has moved straight back down to the May low telling us that these buyers were just short-term traders.
The Moving Average Convergence Divergence (MACD) oscillator did not cross the zero line until early June and now it is back to the line for a possible sell signal.

In the weekly bar chart, below, we can see how bad the decline in UAL was as it broke the lows of late 2017. Prices are below the declining 40-week moving average line.
The weekly OBV line tells a bearish story as it made a new low for the move down last month. The MACD oscillator made a cover shorts buy signal but an outright buy signal is way off beyond the horizon.

In this daily Point and Figure chart of UAL, below, we can see a potential downside price target of $22. 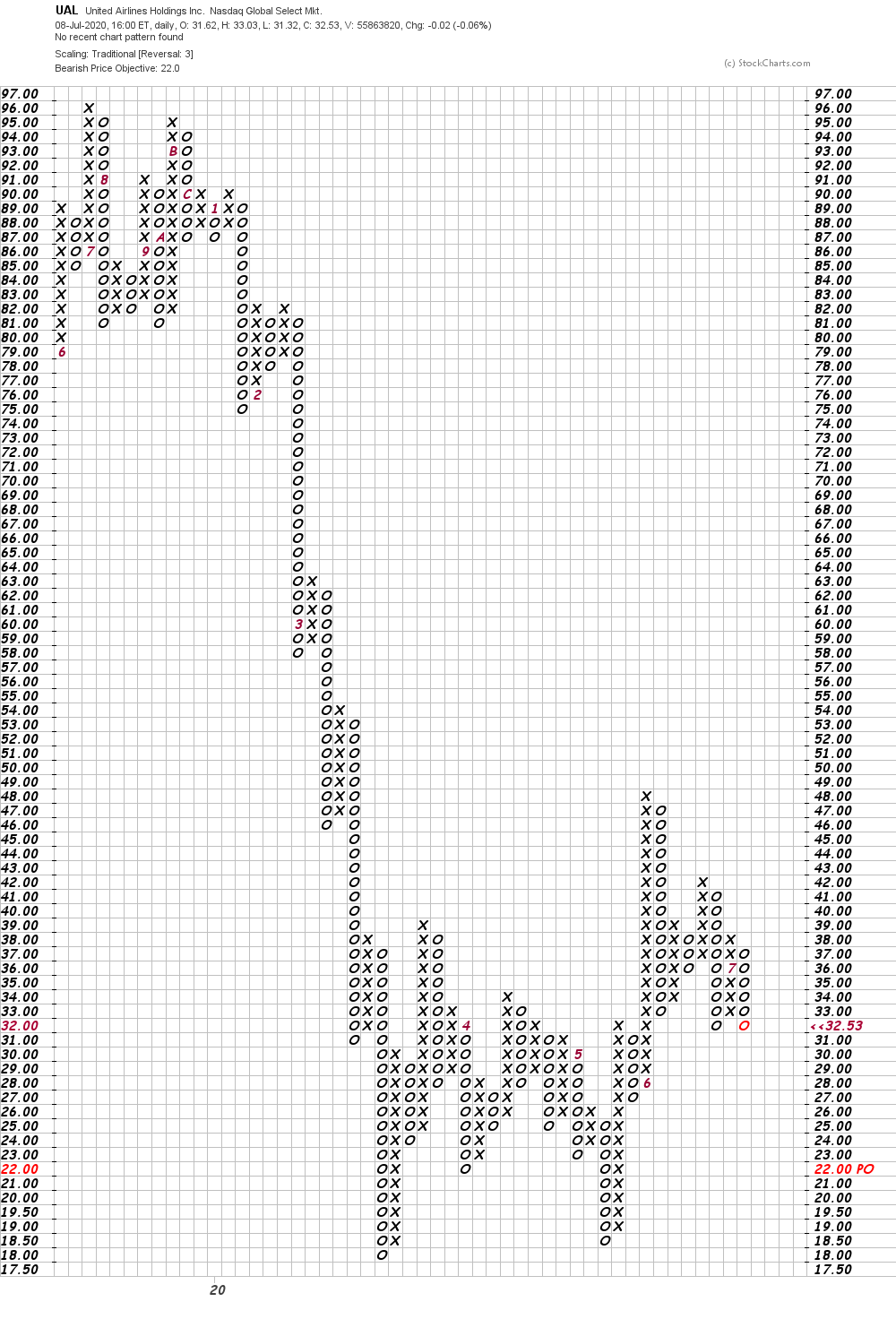 Bottom-line strategy: There are many places I would like to fly to but like so many people I worry about the risks. For the stock of UAL the risk seems to be to the downside. Avoid the long side for the weeks ahead. News of a successful vaccine could be the catalyst for a rally.
Get an email alert each time I write an article for Real Money. Click the "+Follow" next to my byline to this article.
TAGS: Investing | Stocks | Technical Analysis | Airlines