Union Pacific (UNP) is enjoying a big Tuesday after announcing Jim Vena would become the company's new chief operating officer. This move prompted a bevy of upgrades from Wall Street. Ironically, this is a situation similar to the concept I discussed in regards to General Electric (GE) Monday. How much is one person worth?

The market is saying Vena is worth somewhere in the neighborhood of $10 billion. Basing his worth on analyst upgrades puts the number somewhere in the $10 - $15 billion range over the next six to 12 months.

Again, we're playing with the idea of renewed hope. The difference in this situation is the problem at Union Pacific is somewhat straight-forward. The company suffers from service problems and rail congestion leading to disappointing profitability projections for 2019. Vena's industry knowledge specifically targets precision scheduling railroading, a strategy to make railroads more efficient and profitable.

Round hole. Round peg.

There's little guessing game to be had here, though.

By no means does this guarantee success, but it is a logical move and one that can be measured fairly quickly.

UNP falls outside of a value range and well short of a growth name. The 2.3% dividend won't get many income-needy investors off the bench, but it's not bad either. In short, UNP is a blend of everything meh, and that might just work in the current market.

We are a little more than two weeks out from earnings, so there's little chance we'll see any impact from Vena by that point. If UNP sells off on that report, it should be the entry folks who missed Tuesday's move jump on. 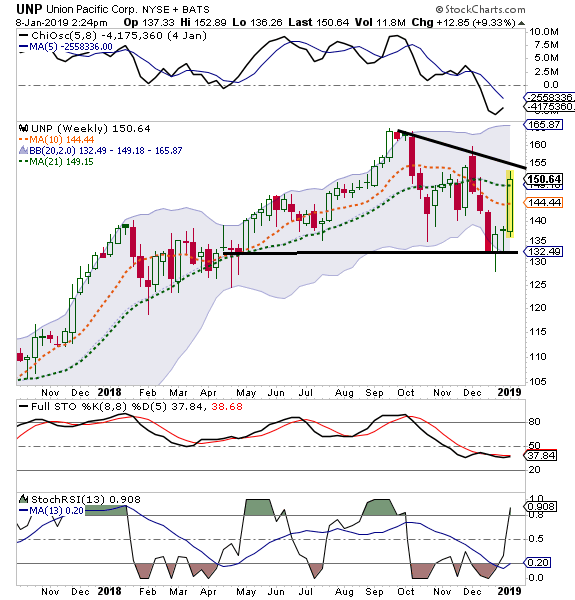 Reviewing the weekly chart, above, support just above $130 appears strong. A breach of that level will have even the most staunch bulls troubled. Given the recent developments, I believe it will hold. Any retracement toward that level, especially in the $130s, would be an attractive entry point into the stock. If UNP achieves a weekly close above $155, it may get loose and retest those fall highs around $165.

It's not often we see a big weekly pop like this week's, while trend and volume remain muted, practically bearish and oversold. That provides plenty in the keg for bulls to explode price higher. I still expect $155 to hold as resistance into earnings.

Unfortunately, traders may have built up too much anticipation into the next report/guidance when we're likely one report away from any turn in UNP's struggles. I'm patient here, but certainly not bearish. Instead, I'd take an opportunistic approach to entry. If it comes, then great. If not, then move on to other opportunities.

Get an email alert each time I write an article for Real Money. Click the "+Follow" next to my byline to this article.
TAGS: Investing | Stocks | Technical Analysis | U.S. Equity | Stock of the Day