Shares of Union Pacific Corp. (UNP) are trading up Tuesday morning as investors react to the naming of Jim Vena, an industry veteran, as the new COO of the railroad. Prices corrected lower the past three months and broke below the flat 200-day moving average line so we need to look over all our charts and indicators to see if we want to follow this strength to the upside and whether prices can generate more buy signals in the days and weeks ahead.

In the daily bar chart of UNP, below, we can see that the 50-day simple moving average line just crossed below the slower-to-react 200-day line from above for what is commonly called a "death cross." This moving average crossover sell signal is typically late and it certainly comes after the highs of September and October. The 200-day average line is flat and could act as resistance as UNP rallies back to its underside around $145. A one-day dip to the downside earlier this month may be considered the "retest" of the December low.

The daily On-Balance-Volume (OBV) line topped with prices in late September and early October and moved lower to the end of the year. A declining OBV line is a sign that sellers of a stock have been more aggressive. The OBV line has not made a new low in the past two weeks and if it turns higher from here it will be considered a positive.

The trend-following Moving Average Convergence Divergence (MACD) crossed to the upside the other day generating a cover shorts buy signal. This indicator says we should no longer be short UNP but it has not yet said we should be an outright buyer -- a close above the zero line would be the buy signal.

In the weekly bar chart of UNP, below, we can see three years of price gains. Prices more than doubled over the past three years and the decline over the past three months looks like a "normal" pullback in a longer-term advance. The decline to the $130 area looks like a good retest of the prior resistance area in the $140-$120 zone from early 2018. Prices are below the flat 40-week moving average line and a weekly close above $145 would be a buy signal.

The weekly OBV line only shows a sideways pattern since September unlike the decline on the daily OBV line. The weekly MACD oscillator is below the zero line but the two averages that make up this indicator have begun to narrow and that can foreshadow an eventual crossover and buy signal.

In this Point and Figure chart of UNP, below, we can see the rallies and reversals without the volume and with less noise seen on a daily bar chart. A rally to $139.38 (very likely this morning) will be a small double top breakout on this chart. The Volume at Price data on the left side of this chart suggest that once UNP gets above $150 or so it should be easier to rally. We'll see. 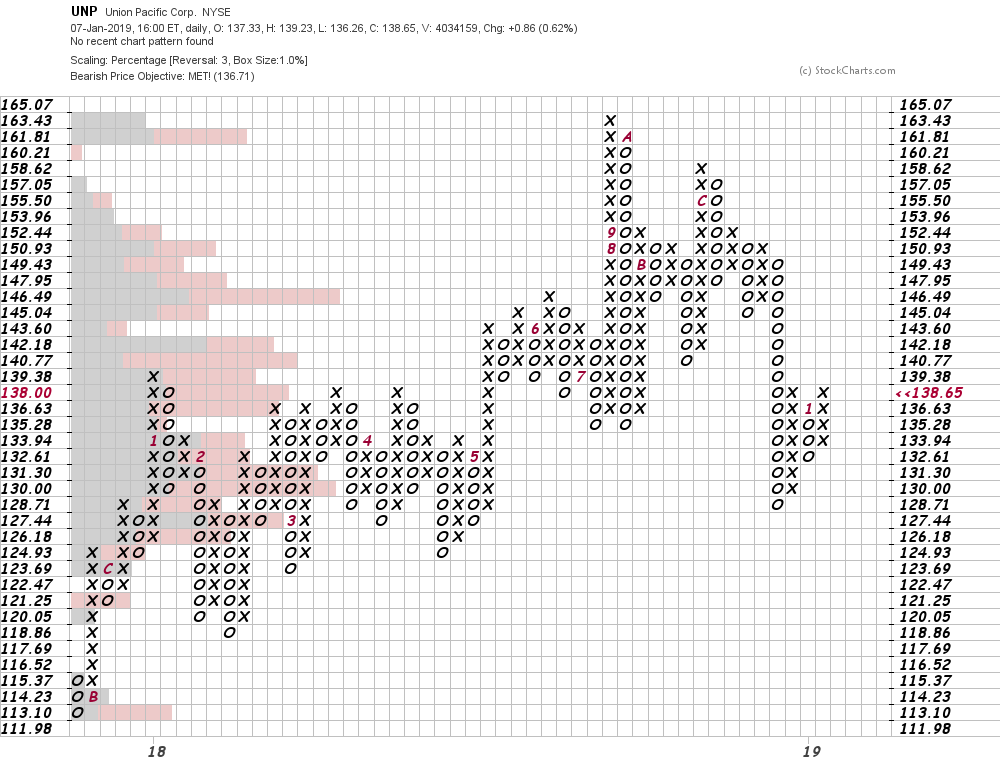 Bottom-line strategy: UNP should open strong and probably close strong Tuesday. Strong volume will help the OBV line turn up and improve the technical conditions. Aggressive traders could go long UNP as close to $140 as possible risking to $130. Add on a close above $145 looking for gains to $160 and maybe higher in the next couple of months.

Get an email alert each time I write an article for Real Money. Click the "+Follow" next to my byline to this article.
TAGS: Investing | Stocks | Technical Analysis | Transportation | Stock of the Day

We will soon see if another V-shape move is in the cards.

In a market with elevated valuations and low yields, we see pharmaceutical stocks as a respite from both.