For his "Executive Decision" segment as part of Tuesday night's Mad Money program on CNBC, Jim Cramer sat down with Lance Fritz, CEO of Union Pacific (UNP) , the nation's largest railroad. UNP is up 20% for the year despite the economic jiggles.

When Fritz was asked about the biggest challenges he faces today, the weather topped the list. Fritz said climate change is happening and the weather is becoming more violent than in years past. UNP now regularly anticipates and prepares for large weather events. On the topic of tariffs and trade, Fritz said the U.S. is right to confront China on its unfair trade practices and countries need to be held accountable. He added that tariffs have been an effective tool to get negotiations started, but if they last too long, they will have a negative effect on our economy.

Let's see what the flagman has to say about the charts and indicators of UNP.

In the daily bar chart of UNP, below, we can see that prices corrected lower from October to the end of December. A gap to the upside in early January started a tradeable rally to early May but prices have weakened the past six weeks. UNP is now below the cresting 50-day simple moving average line but still above the rising 200-day line.

The volume pattern has not been constructive as it looks like turnover has declined from the pace set in September. The daily On-Balance-Volume (OBV) line has also made lower highs since September suggesting that buyers of UNP have been less and less aggressive.

The trend-following Moving Average Convergence Divergence (MACD) has weakened from late February and this month fell below the zero line for an outright sell signal.

In the weekly bar chart of UNP, below, we can see that prices have doubled in the past three years. Not bad. On this chart the weakness of the daily chart is less visible. Prices are above the 40-week moving average line but the slope of this longer-term indicator has begun to flatten.

The weekly OBV line shows a peak at the end of April and the MACD oscillator crossed to a take profits sell signal and not an outright sell.

In this Point and Figure chart of UNP, below, we can see a downside price target of $154 being projected. 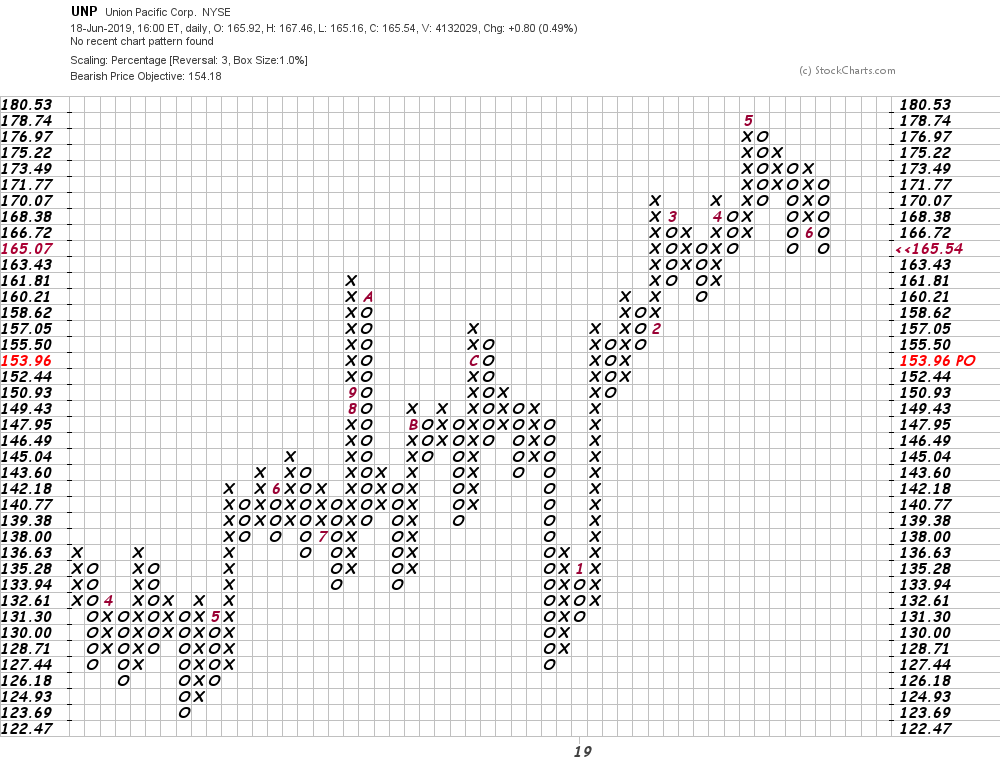 Bottom-line strategy: The  charts and indicators of UNP have weakened since early May. If the Point and Figure target is reached it will mean that prices have broken below the 200-day average line. I would defer purchases of UNP.

Get an email alert each time I write an article for Real Money. Click the "+Follow" next to my byline to this article.
TAGS: Investing | Stocks | Technical Analysis | Transportation | Mad Money | Executive Interview