Despite a dull trading session, some of the charts of the major equity indices managed to close above resistance Tuesday, with one making a new closing high. Market breadth remains positive as well.

Indicators suggest the market is now overbought, which may create a short-term headwind for the market, but this is being somewhat counterbalanced by further improvement in investor psychology. The new bear/bull ratios show another decline in bullish sentiment continues to relieve what had previously been an overly optimistic outlook on the part of investors. 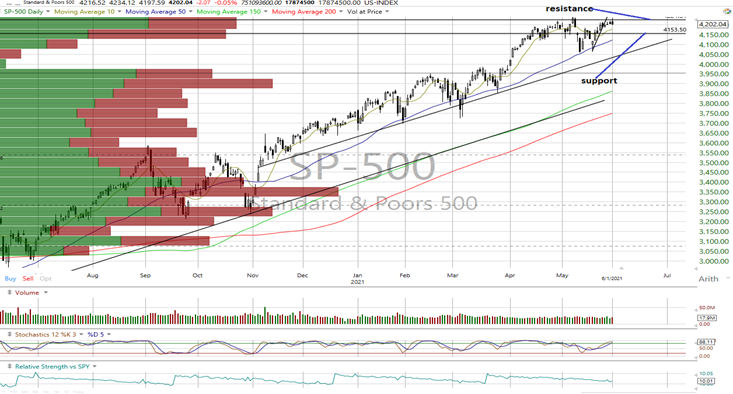 The major equity indices closed mixed Tuesday with the S&P 500 (see above), Nasdaq Composite and Nasdaq 100 posting minor losses as the rest rose modestly. All closed at or near their intraday lows.

However, market breadth was quite strong, implying strengthening internals.

The Nasdaq 100 closed below its near-term uptrend line and is now neutral while the MidCap 400, Russell 2000 and Value Line Arithmetic Index closed above resistance. In fact, the unweighted Value Line index made a new closing high.

As such, all are in near-term uptrends except the S&P 500 and Nasdaq 100, which are neutral.

Cumulative breadth remains positive for the All Exchange, NYSE and Nasdaq advance/decline lines as well.

Stochastic levels remain overbought but have not yet triggered bearish crossover signals.

The Rydex Ratio (contrarian indicator), measuring the action of the leveraged ETF traders, rose to a bearish 1.31 as the they extended their leveraged long exposure.

This week's AAII bear/bull ratio stayed neutral at 26.58/36.64. The Investors Intelligence Bear/Bull Ratio (contrary indicator) saw another drop in bullish sentiment to 16.8/51.5 but remains bearish. We reiterate, the drop in AAII and II percentage of bulls is an improvement from what we had previously viewed as an excess of bullish expectations.

The Open Insider Buy/Sell Ratio was unchanged at 31.8 and remains neutral. However, it suggests insiders' desire to buy their stock has improved slightly.

Valuation continues to appear extended with the forward 12-month consensus earnings estimate for the S&P 500 from Bloomberg rising to $190.70 per share, leaving the S&P's forward P/E multiple at 22.0x, with the "rule of 20" finding fair value at 18.4x. The valuation spread has been consistently wide over the past several months while the forward estimates have risen rather consistently.

The 10-year Treasury yield closed at 1.62%. We view support at 1.55% with resistance at 1.63%. We continue to believe the moves in the 10-year yield may well have the greatest influence over the near-term action on the equity indexes.

While the charts have been rather dormant, the issues listed above suggest an increasingly likely resolution of the markets to the upside. As such, we remain "neutral/positive" in our near-term macro-outlook for equities.