By BRUCE KAMICH May 09, 2019 | 07:58 AM EDT
Stocks quotes in this article: UAA
For his "Executive Decision" segment of Mad Money Wednesday night, our own Jim Cramer checked in with Kevin Plank, chairman and CEO, and Patrick Frisk, president and COO, of Under Armour, Inc. ( UAA) , as the company celebrated Armour Day, its annual celebration of their team and giving back to their hometown of Baltimore, Md.
Plank said that Under Armour drives shareholder return with shares that are up 26% so far this year. The company is getting their operations in order, with rising gross margins and lower inventory, he said. Also UAA's sourcing from China has gone from 30% in the past to just 15% now, with the ultimate goal of achieving 7% or less. Of the products made in China, only 10% end up in the U.S., making the impact of tariffs minimal.

UAA also continues to innovate with new products that not only provide compression, but also those to improve blood flow and speed recovery times after workouts.

The fundamental story sounds good but let's take a few minutes to check out the stock chart and some indicators.

In the daily bar chart of UAA, below, we can see that prices have traded in a wide sideways pattern the past twelve months. Rallies into the $24-$25 area have failed in June, November, December and earlier this month. Prices are currently above the rising or bullish 50-day simple moving average line and the flat or neutral 200-day average line.

The daily On-Balance-Volume (OBV) line was neutral from last May to the end of December but it has been showing more aggressive buying so far this year. The trend following Moving Average Convergence Divergence (MACD) oscillator has been close to the zero line the past year and barely shows much "trend strength" now.

In the weekly bar chart of UAA, below, we can see a long decline followed by a neutral or sideways pattern the past year. Prices are above the ever-so-slightly rising 40-week moving average line.

The weekly OBV line shows some minor improvement the past four months and the weekly MACD oscillator is above the zero line. Positive indicators but a weekly close above $25 is needed for an upside breakout.

In this Point and Figure chart of UAA, below, we look at only the price action -- no volume and no indicators. This charting method dates back to the 1880s and its popularity peaked back in the 1960s.
An upside price target of $29.80 is being projected but a trade at $25.17 is needed for a breakout. 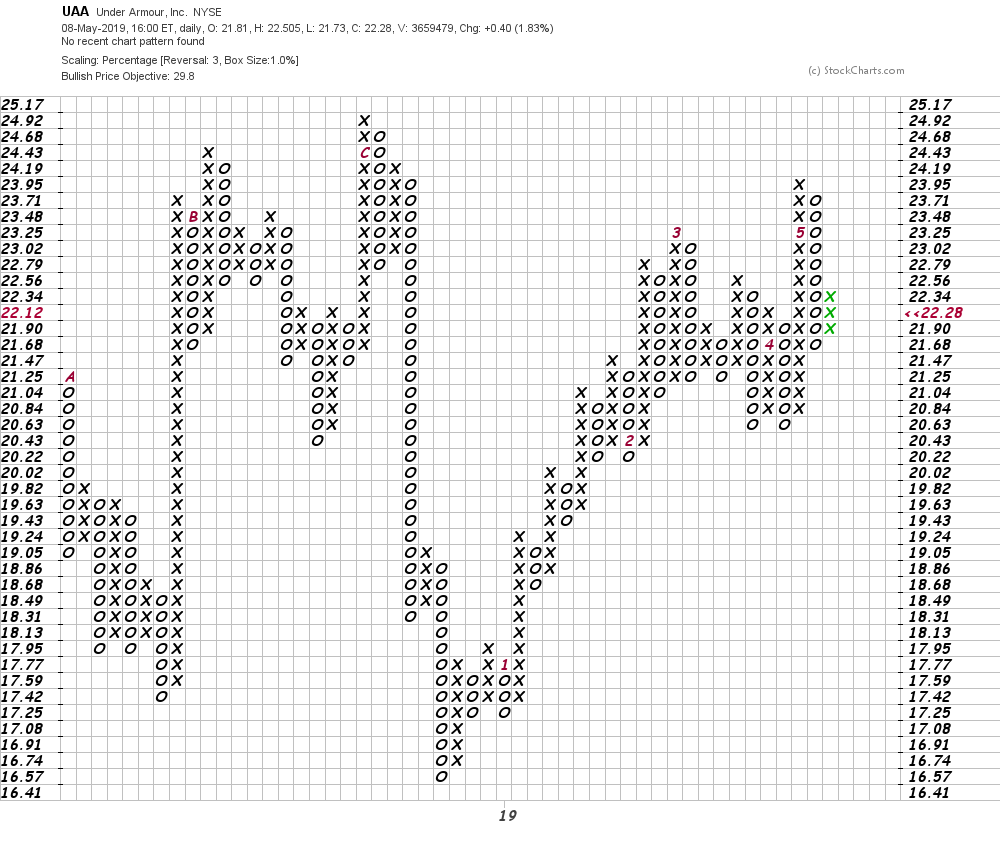 Bottom-line strategy: UAA has rallied this calendar year but the longer-term picture is mostly neutral. If the broader market has made a seasonal peak this month it could be hard for UAA to make its way much higher. Strength above $25 is bullish and a close below $20.50 would be bearish.
Get an email alert each time I write an article for Real Money. Click the "+Follow" next to my byline to this article.
TAGS: Investing | Stocks | Technical Analysis | Mad Money | U.S. Equity