Simple question that I asked of that man in the blackened window this morning. He just kind of looked at me. I think he was hoping that maybe I knew.

Yes, the Senate broke for recess. Unless called back, this group will not be back in Washington until Sept. 8. Think that's bad? The House went into summer recess on July 31. True story.

These guys just do not work like you and me. They do not have that fifth gear when the pressure is on. It's up to you whether to rehire this crew. No, don't look at the other side. Both sides got us here.

Beyond our legislators, do traders or investors care? Do managers care? The Nasdaq Composite has run more than 60% from the market nadir that was March 23. The S&P 500 and the Dow Industrials both more like 50%. It is reported that this very same blue-chip index just had its best 100 days since 1933. Good thing that 1933 was the year that the Great Depression came to a close.

No, wait. That was a condition of full employment created by a kinetic world war. The year 1933 was actually kind of less than halfway through a long period of misery. Uh, oh. That said, five sectors remain lower year to date. Just maybe, the markets are plural, and probably no longer can be referred to as a single entity that either does well or does poorly.

Equity markets traded quite listlessly on Thursday. Internet stocks did all right in general. That kept the Communications Services sector in the green. Information Technology treaded water, buoyed by hardware for a change. That was really Apple (AAPL) and Roku (ROKU) . On the software side, Datadog (DDOG) had a nice day.

Thursday was quiet, though. The Dow Transports finally posted a losing session, ending what was an improbable 10-day winning streak. Trading volume was not just light. It was really, really light. Thursday volume was significantly lighter than what markets had experienced on Wednesday, and that was thin. Breadth was rather weak at the New York Stock Exchange, by the way, and a little more even at the Nasdaq Market Site. Bottom line? The major market indices remain close enough to all-time records.

There is scant evidence of either professional accumulation or distribution over the past two days. "They" wait because they are uncertain. Uncertain in consideration of the spread and severity of this virus, the election, how to value assets with or without broadly increased fiscal support, and the state of the economy this year and next given all that we do not know.

The man in the window, whom I know so well, has become as quiet as a church mouse because "they" have been as quiet as church mice. Estimates become guesses when output is the product of less than clearly defined input.

Today is Friday. The urge will be there to head for the exits, at least for some, unless there is some kind of breaking news that interacts with that potentially negative instinct in a positive way. The Census Bureau's Retail Sales report could be an issue. Then again, that report was put together before the music stopped. The music, by the way, has stopped. August will be ugly. Economists will point that out on a television near you just after these numbers hit the tape.

By now many of you have heard at least parts of Centers for Disease Control (CDC) Director Dr. Robert Redfield's interview at WebMD on Wednesday. The short of it is this: Dr. Redfield sees a potentially rough road ahead. Redfield said, "We're going to have Covid in the fall, and we're going to have flu in the fall. And either one of those by themselves can stress certain hospital systems." Redfield at one point in the interview warned that the nation could be bracing for "the worst fall, from a public health perspective, we've ever had." By all means, play football. What harm could 22 people landing on top of each other constantly for three hours do?

The director goes on to explain that we as a people are not quite defenseless until the sunny days arrive that every person in need will have access to both vaccines to ward off and therapeutics to fend off Covid-19. He mentions the use of masks and social distancing. I would hope that these basic lines of defense as well as maintaining an elite level of hand hygiene are all common sense by now. He also mentions making use of "the flu shot," which I had to take every year in the military but have never done so voluntarily. Fact is, the shot itself got me sick more than once over the years. One time, very, very sick.

My question is this, and I ask it not just for myself, but also for the many. If one has suffered and clinically recovered from an infection of Covid-19, and especially for those who may have suffered from the long-haul impact of the post-Covid syndrome (that is finally getting some attention), is one's immune system up to handling a flu shot, or even the early Covid vaccines once they reach broad distribution? Serious question. I know there are a few physicians among the readership. Ideas?

You remember Data, don't you? How about his amoral brother Lore?

Yeah, this has nothing to do with those guys, though I will mention now that the Star Trek franchise has entered my zero dark-thirty consciousness, that Worf was my all-time favorite character. You'll have to forgive me, but I am suddenly remembering the episode where they played baseball in the Holodeck. If you do, now you're laughing out loud early on a Friday morning as well.

Back to the mission at hand. The numbers are troubling. We look for positivity at every turn. On Thursday morning, (some) economists and traders celebrated a weekly number for Initial Jobless Claims that was about 50% higher than what was the all-time worst print for the series until March.

Why? That number, as well the print for Continuing Claims, beat expectations and appear to be improving. Understand this. Labor markets are so far away from being OK that we are not "getting there." The "progress" being made will run into small to midsize business defaults as well as another round of corporate furloughs and layoffs this fall as the flu bug teams up with Covid to try to finish us off, and as our legislators yawn, then stretch their arms and then think about working for a living. No way to put the lack of urgency at the legislative level nicely.

Readers will also note that China's National Bureau of Statistics released a bevy of truly less-than-impressive macroeconomic data points for July. Fixed Asset Investment and Retail Sales continue to contract. Industrial Production increased, but less than expected. Unemployment remained steady. This is a nation where the authorities control everything and is now the furthest along in the post-pandemic recovery, and still that recovery can be described as sideways at best.

Shanghai reacted in a mildly optimistic fashion. Perhaps they anticipate some stimulus. The rest of the world? Not so much. Most of the European continent is working their way through a risk-off session that has leaked into U.S. equity index futures markets.

Applied Materials (AMAT) posted its fiscal third-quarter performance on Thursday evening. The maker of semiconductor equipment beat, at least after adjusting, expectations for both the top and bottom lines. Revenue growth is key here, at $4.4 billion; this is growth of 23.6%, a third consecutive quarter of acceleration. Semiconductor systems sported growth of 28%. Within that group, the percentage of sales brought in by the foundry has expanded, while both DRAM and NAND experienced a narrowing of those respective slices of pie. Best of all, AMAT guided the current quarter higher.

Kind of makes sense once one thinks about performance at Micron (MU) or Western Digital (WDC) , and then compares that with what we have seen at Lam Research (LRCX) or KLA Corp. (KLAC) . 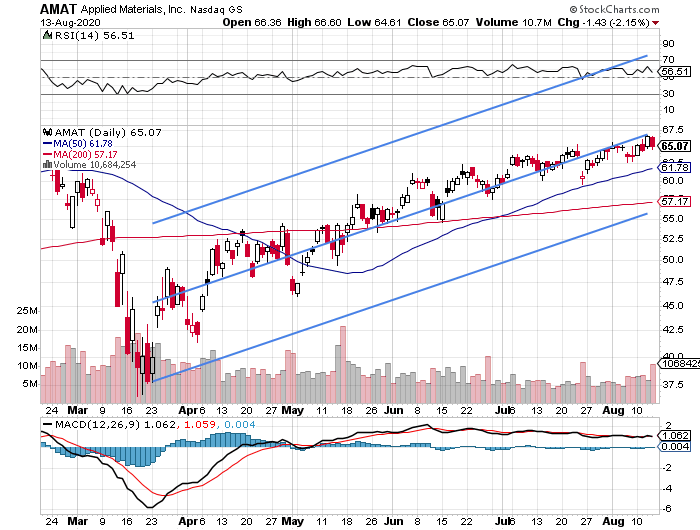 Do I jump on this bandwagon here on Friday morning? Probably not right here, and not on a Friday. Close to the 50-day simple moving average (SMA), I think about it, but I do not expect that to happen this day. For me, aside from the elites -- Nvidia (NVDA) and Advanced Micro Devices (AMD) -- Taiwan Semiconductor (TSM) is the one to watch. That one has moved sideways for weeks after an incredible run fueled by earnings and guidance. That name is my cue for the group.

No significant quarterly earnings are scheduled.

Get an email alert each time I write an article for Real Money. Click the "+Follow" next to my byline to this article.
TAGS: Earnings | Economic Data | Economy | Investing | Politics | Stocks | Semiconductors & Semiconductor Equipment | China | Real Money | Coronavirus