By definition, quite simple. To be discernible would be akin to being appreciable, or perceptible. Describe the condition of this coronavirus that has become our "front and center" headline news story. Go ahead. The virus itself? Sure, but also the impact upon human interaction, all business and all economies as complex systems are stressed.

Complexity Theory in short suggests that all systems produce relationships based on interaction that may or may not be understood ahead of actual near-complete feedback. Then, and only then, would what we might consider to be "rules" become apparent. Now, rules exist in science. Complexity Theory is a science? I don't know. I am asking you. Want to get really deep in the weeds? What if complex systems are adaptive, or competitive? This is the very gist of our situation. We cannot know how broad, the location of, or the depth of these impacts until the feedback loop is more complete.

The very problem with what we refer to as "complexity" is our inability to model outcome, as all dependencies and all relationships are not readily understood. Modeling outcome might be simple should all interaction occur in and then provide output in some kind of logical, linear ecosystem. Complex systems can potentially produce a nearly unlimited number of non-linear results. This would be due to a lag between causation and real-time cognition of what might be related not just within a complex system, but between complex systems. What if complex systems previously thought of as unrelated actually compete for resources? Model that, cowboy.

Oh, what pours out of the human brain at 03:30. Enter Sandman? Not welcome here. Here we answer the bell. What don't we know, or at least misunderstand? What is the relationship between the spread of Covid-19 and global or local economies, subsequently forcing interaction (or lack thereof) that negatively impacts cross-border commerce, local commerce, variance in health care capabilities, ability to secure or detect, ability to defend? How does this extend whereas crime or even national politics are concerned? What moves incorrectly, or at least inefficiently, once monetary and/or fiscal response is applied to what is at first a crisis not economic in creation? Can policy provoke sustained velocity once sentiment is damaged? I need every brain in on this one, gang. Think our policy makers are anticipatory? Hmm. Let's move on.

Now, what is the relationship once all systems are partially compromised or start adapting to change? What is the non-linear result of rushing vaccines or treatments to the fore. Can all outcomes be fully understood? Is this all truly discernible? By you? By me? By the keyword-reading algorithms that control the various points of sale across the financial landscape at speeds measured in microseconds?

The better word might be "fluctuant," as by definition to be fluctuant would be akin to being unstable. It's OK to stop and think. It's not OK to just hope.

Ugly. Equity markets suffered globally and then domestically. The Dow Jones Industrial Average, the S&P 500, the Nasdaq Composite and the Dow Jones Transportation Average all gave up between 3.4% and 3.7%. Think about that: The worst single day for many of these indices in over a year. The S&P 500 closed below its own 50-day simple moving average (SMA) for the first time since last Oct. 9 on trading volume that has increased for three consecutive (all down) days. To say that the marketplace has entered into a state of distribution would be an understatement.

This literal beat-down across U.S. equities (the utility sector led performance at -1.17%) was coupled with insatiable demand for the longer end of the U.S. Treasury yield curve. Not only did seekers of safe haven buy up U.S. 10-year notes and 30-year bonds, they mangled the slope of the now badly inverted curve.

The most important spread within our yield curve is the three-month T-bill versus that 10-year note. At zero-dark thirty on Tuesday morning, the three-month pays 1.533% while the 10-year gives up just 1.359%. That's -17.4 basis points, sports fans. That means that as the bond market tries to price in the complexity of impact due to this virus, it is also pricing out potential for economic growth, or even inflation for that matter, which could be dangerous as the unknown depth of various scarcities across many levels of the global economy are perhaps the only true certainty of the moment.

I would not call it correlation, but readers will see that equity markets have at least tried in recent days to mimic the three-month/10-year yield spread.

The fact is that the U.S. one-month T-bill is inverted right through the 10-year note, and that all successive series of issuance are inverted against their sequential rival until you get between the three-year note and the five-year note, and that spread is basically flat. Not to say that the bond market can never overreact. It can. Right now, however, that market is pricing in successive years of ugly.

This, for me, makes the banks uninvestable, though I still have small exposure to both Citigroup (C) and Wells Fargo (WFC) . I have reduced this exposure and am not adding on the dip. This also makes the energy space rather tough. I have ridden my book of all energy names save for BP PLC (BP) , as I wrote that I would ahead of my vacation last week, for other reasons. Understand that as demand for air travel decreases and as consumer demand for what the cruise lines provide is greatly reduced, that demand for energy-producing commodities will ebb as well. The only trick there as I have tried to convey is that these names must be replaced by non-energy dividend payers. Do I need to mention the airlines or cruise lines one by one? You did see United Airlines (UAL) pull its full-year guidance Monday night. I think they all need to.

As for those seeking protection, I trust the VIX about as far as I can throw it, even at the highest levels in roughly a year's time. Besides watching investors seek-haven assets such as sovereign debt securities and quite obviously gold bullion, I watch the CBOE's Total Put/Call ratio. This is the one that incorporates options relative to both single stocks and indices as well.

While the inverse relationship between the Put/Call ratio and the S&P 500 would be self-evident at almost any time in space, readers should bear witness to the fact that even though this ratio was indeed higher on Friday than on Monday, the ratio has now spent two days at levels unseen since early December.

About all we do know is that there will be positive headlines and negative headlines moving forward from here. This will create danger, but also opportunity. Personally, I try to take advantage of these situations.

Let me tell you how I go about trading these pressured names with varied levels of Chinese exposure that I consider to be high-quality names. First, always run with some dry powder. That's cash for those outside of the industry. It means that you do not have to borrow or make a sale in order to make a purchase.

Second, in all markets, I move incrementally. I initiate, usually with about one-eighth of my intended position size, and I do this above my intended average price, or net basis. You have a target price for all of your positions, don't you? Well, you should have one for entry as well. Let's take a look at Amazon, which along with Apple, Disney, BP and Citigroup are holdings of Jim Cramer's Action Alerts PLUS charitable trust. 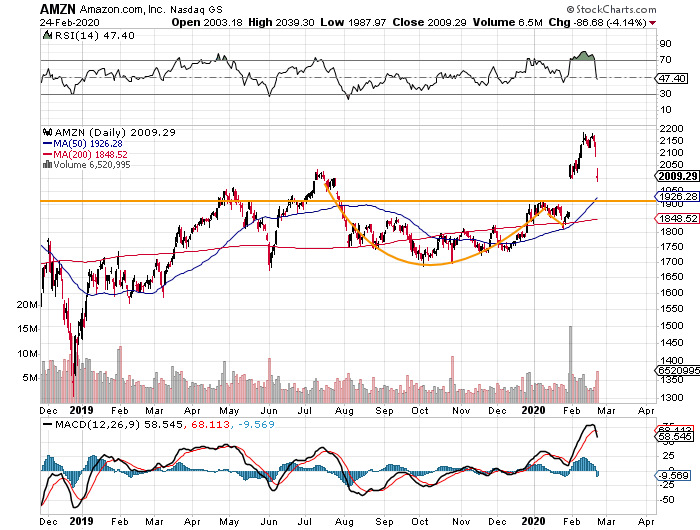 You see that Amazon has gapped twice without truly filling these gaps. The first gap came in response to earnings in late January. The stock ran from $1,882 to $2,002 in one shot. Do gaps have to fill? They usually do. You knew that if you went into those earnings flat Amazon and if you were patient, a chance to own shares in the $1,900s would probably arise. So that's what I did. On Monday, I got myself one-fourth toward my intended position size.

I have two choices depending on the stock's behavior here on Tuesday.

One, the shares come in and I continue rebuilding this position while working on net basis. Two, the shares go higher, and depending on how much higher, I might take the profit. That's the difference between trading and investing for me. They all start out as an idea. If I end up with a small partial because the shares moved before I was ready, poof! I am a trader. Should I end up fortunate enough to get long my fill and have to manage the risk, well, congratulations -- that's called investment.

By the way, Amazon also gapped lower over the weekend, from $2,088 down to $2,039. There are two gaps that need to be filled. Can Amazon wiggle it? If Amazon can, then can I? Well, that is what I am trying to do. As for the other two names, Disney is also a two-gapper (Nov. 7-8 filled on Monday, this past weekend open), and I expect Apple to at least attempt to retake the 50-day SMA ($305).