Thursday would be different. Equity markets opened on weakness. Perhaps it was about time. By most measures, these markets had bottomed in mid-June and if one had been completely sidelined, that someone had missed a face-ripping rally. A tradeable bottom is what we call it, basically because a bottom that stands for a month or more certainly was a tradeable opportunity, regardless of whether one saw it in anything close to real time. Secondly, we call it that because planting a flag and calling anything "the" bottom is a game played only by the foolhardy.

We likely won't know for sure that a long-term bottom has been set until well after the fact. We also don't know if a traditional capitulation must happen in order for a bottom to be set or what capitulation will even look like. It really is different this time. We no longer have teams of colored jackets shouting at each other and waving hands in the air. Algorithmic capitulation through electronic means is silent, no matter how much volume there is or how volatile it gets. Even on the other end. You and I may be stock pickers, and we may take pride in that fact, but we are among the last of our breed.

Next time you see your accounting or medical or coding friend, and he or she tells you that they are in the market, see if they can name any stocks. Some of them can. Many cannot outside of their respective fields. They may know a strategy or a fund that they put part of their paycheck in. Those who do something occupationally other than trading or investing are no longer tuned in like they were. The game was more interesting when winning was easier. If one's productive hours, from a revenue generation perspective, are focused elsewhere, then why would they divide that focus when monetary conditions tighten, economies slow and financial markets retrace territory once left behind?

When I was young, I used to love obstacle courses. It was a chance to run hard, to jump, to climb, to swing, to swim. Oh, the exhilaration. One thing folks learn early in the military is that finishing first on one of the big obstacle courses (not the little ones you see next to parade fields) is a bad thing. Finishing ahead of the pack simply means that you left someone behind. You want to win respect, you come in with the slower kids, you make sure that they make it through. Placing first as an individual is something that will take a while to live down. Coming in with a group because you put the needs of the unit above your own? They'll follow you anywhere.

Like I mentioned above, markets got off to a sloppy start on Thursday. The European Central Bank had increased its three policy rates by 50 basis points apiece in the first interest rate hike for the eurozone in more than a decade. The ECB had signaled a 25-basis-point hike well ahead of time. The more hawkish take was a late change in response to elevated inflation, much like what we've seen here.

Then it was on to the macro here in the US. Talk about a mess. Weekly first-time Jobless Claims hit the tape at 251,000, which was an eight-month high for that series and well above the low of 166,000 back in March. Continuing jobless claims, which run a week behind initial claims, printed up 51,000 from the week prior as well.

Simultaneously, the Philadelphia Fed released its manufacturing survey for July. The Philly Fed is probably the most closely watched regional manufacturing report in this country, and it was ugly. The headline number printed in contraction at -12.3. This was the fourth consecutive month that Philly missed consensus, and the third straight month that Philly either printed in contraction or darn close to it.

There were a couple silver linings in the July Philly Fed. Number of employees and average workweek continue to grow. That's positive, but also not optimal if the business does not support the new hires. In addition, both prices paid and price received, while still hot as heck, are accelerating more slowly than they had been.

Done? Not exactly. After the opening bell on Thursday, the Conference Board released its June Leading Index. We used to call this one the leading indicators, because that's what it is. The index is a composite of 10 economic indicators for the month at hand. This index printed at -0.8% for June from May after printing at -0.6% in May from April. This is where the durability kicked in.

The news out of Europe and the lousy US macro weighed upon market performance... until it did not. Sure, West Texas Intermediate (WTI) crude sold off hard due to reports that US demand for gasoline had sunk like a rock due to high prices. Driving season? Not at these prices. But $95 crude one day after $104 crude? Fact. That knocked the stuffing out of the Energy sector. Bonds rallied. The US 10-Year Note took back 12 basis points for the day and has taken more back here on Friday morning. I see US 10-Year paper yielding 2.81% this morning after paying as much as 3.07% very early on Thursday morning.

Equities? They rallied throughout the day on Thursday. The action was much sloppier than it had been all week. Still, most of your equity indexes managed gains. Only the Dow Transports and the VIX lost ground. Among majors, the Nasdaq Composite and Nasdaq 100 gained 1.36% and 1.44%, respectively, supported by the Philadelphia Semiconductor Index (+1.53%). That was as it has been all week.

However, some defensive sectors did better. After three days of the defensives taking the bottom four places on the daily performance tables, that performance was spread more evenly on Thursday. Nine of the 11 S&P sector-select SPDR ETFs shaded green for the session, with Discretionaries (XLY) way out in front at +2.29%. The group was obviously led by the autos, which were led by Tesla (TSLA) . Health Care (XLV) , a defense, finished in second place at +1.58%. Energy (XLE) closed down 1.75% and was the only sector to take a rather severe beating.

Getting What We Came For

What were we looking for 24 hours ago? You in the back... That's right. We wanted to see a retest of the 50-day simple moving average (SMAs) from above and we wanted to see if the major indexes could pass that test. This is what happened on Thursday. I don't think that I can say that anyone is out of the woods, but this is undeniably constructive. 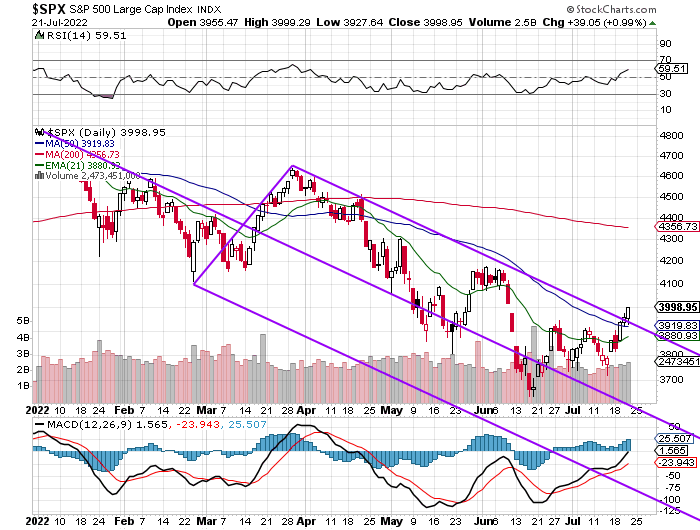 The S&P 500 ultimately built on the groundwork laid earlier in the week. Obviously, the more time spent above the 50-day SMA, the more that portfolio managers have been dragged over the hill, regardless of whether they wanted to participate. Relative Strength is good but nowhere near overbought as the shares try to break out of our Pitchfork. As for the daily moving average convergence divergence (MACD), that 12-day EMA has been pulled into positive territory. Now I need to see the 26-day EMA get there without forcing a bearish crossover of that 12-day line. 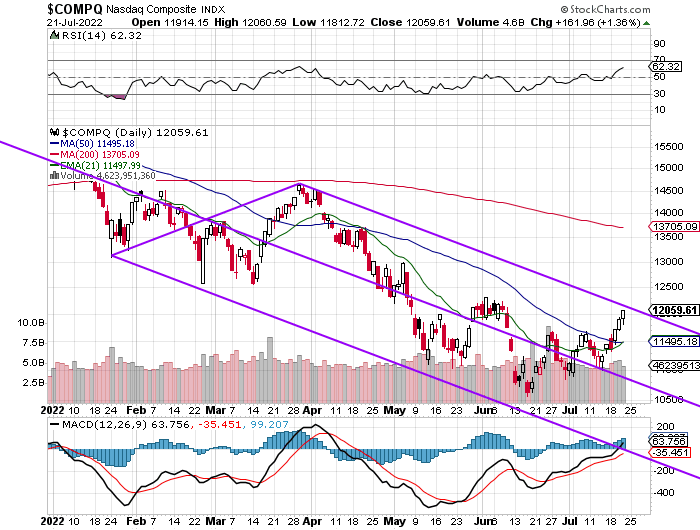 As readers can plainly see, the Nasdaq Composite has moved well away from its 50-day SMA, making more progress there than has the S&P 500. Yet the Nasdaq Composite situationally, from the view of Relative Strength and the daily MACD, is in roughly the same shape as the S&P 500. This index has also not yet made a move on the upper trend line of our Pitchfork. That said, technically, these markets are in a much better place than they were two or even one week ago.

... and you know what it is. Until Thursday, aggregate trading volume had been the friend of the bulls. The volume had clearly been heavier in July on up days than on down days. On Thursday, that changed, which puts just a little bit of caution in my step on Friday morning.

On Thursday, winners beat losers at the New York Stock Exchange by a rough 7 to 4, and at the Nasdaq Market Site by 3 to 2. Advancing volume took a 58.7% share of composite NYSE-listed trade and a 62.3% share of that metric for Nasdaq listings. However, trading volumes were lower. Trading ebbed for NYSE and Nasdaq listings as well as across constituent members of both the S&P 500 and Nasdaq Composite.

Does that mean that the torrent of portfolio managers who have been forced by the process of price discovery to participate more heavily might be slowing to a trickle? It might. Let's see how Friday plays out. 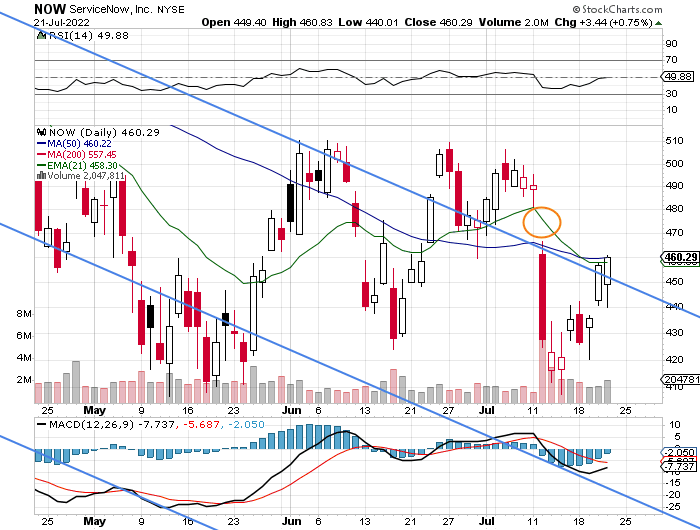 I entered ServiceNow (NOW) when CEO Bill McDermott accidentally put his foot in his mouth on Jim Cramer's show (July 12) and added as the name continued to drop in the days that followed. The result has been an absolute home run. Now, the shares have hit resistance at the 21-day EMA/50-day SMA for two consecutive days. Relative strength is neutral. The daily MACD looks as if it waits to see if ServiceNow can get over those moving averages.

There is an unfilled gap that still needs the stock to see $480 to fill. Does it get there? Time to take profits? The stock still trades at 62x forward earnings. Earnings are due next Wednesday (so is the Fed). The street is looking for 25% revenue growth. 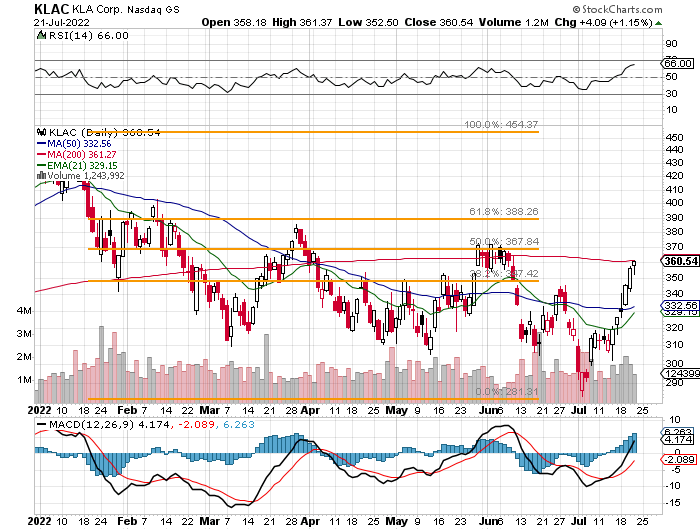 Then there's KLA Corp. (KLAC) , which I initiated and have been adding to as Congress has been talking up the group. Both relative strength and the daily MACD are going where I want them. This one retook the 50-day SMA on Monday and is already pressed up against the 200-day SMA. Taking that level would be HUGE. The portfolio managers who have been sleep-walking would be forced into the name if that spot could be taken and held.

The stock trades at a very reasonable 17x and yields 1.22%. KLAC reports earnings next Thursday. (The Bureau of Economic Analysis also reports second-quarter GDP next Thursday.) The street is looking for 26% revenue growth.

Anyone else notice that the Fed's balance sheet for the week ended July 20 grew by $3.4 billion after growing by $4 billion the week prior? The balance sheet still stands at $8.899 trillion. Anyone?