During Friday night's Veterans Day themed Mad Money program Jim Cramer also praised utilities such as Exelon Corp. (EXC) for their efforts to employ veterans. Exelon is a Fortune 100 company with energy operations in 48 states along with D.C. and Canada. Let's check out the charts of EXC to see how they are shaping up.

In the daily bar chart of EXC, below, we can see that prices "rolled over" from March to late June and then in early July prices started a decline into early August. Since the beginning of August prices have been finding buying interest around $44. Now EXC is below the cresting 200-day moving average line and the declining 50-day moving average line.

The trading volume shows a big surge in late October as prices quickly plunged from $47 to below $44. Prices rebounded from below $44 (again) and are back down near this support zone. In spite of EXC's up and down swings the daily On-Balance-Volume (OBV) line has been rock steady since early September, which suggests that investors have held their long positions.

The trend-following Moving Average Convergence Divergence (MACD) oscillator is below the zero line in bearish territory but the two moving averages that make up this indicator are very close to a crossover.

In the weekly bar chart of EXC, below, we can see that prices are below the cresting 40-week moving average line. We can also see that the $44 level or area has been an important chart point for more than a year.
The weekly OBV line has been in a decline from March and that suggests a much different story than the daily OBV line. This weekly line suggests that investors have been distributing (selling) stock for months. The weekly MACD oscillator is below the zero line but could cross to the upside again if prices rallied soon.

In this Point and Figure chart of EXC, below, we can see that prices have met a downside price target and that the $43.51 level has been key support. 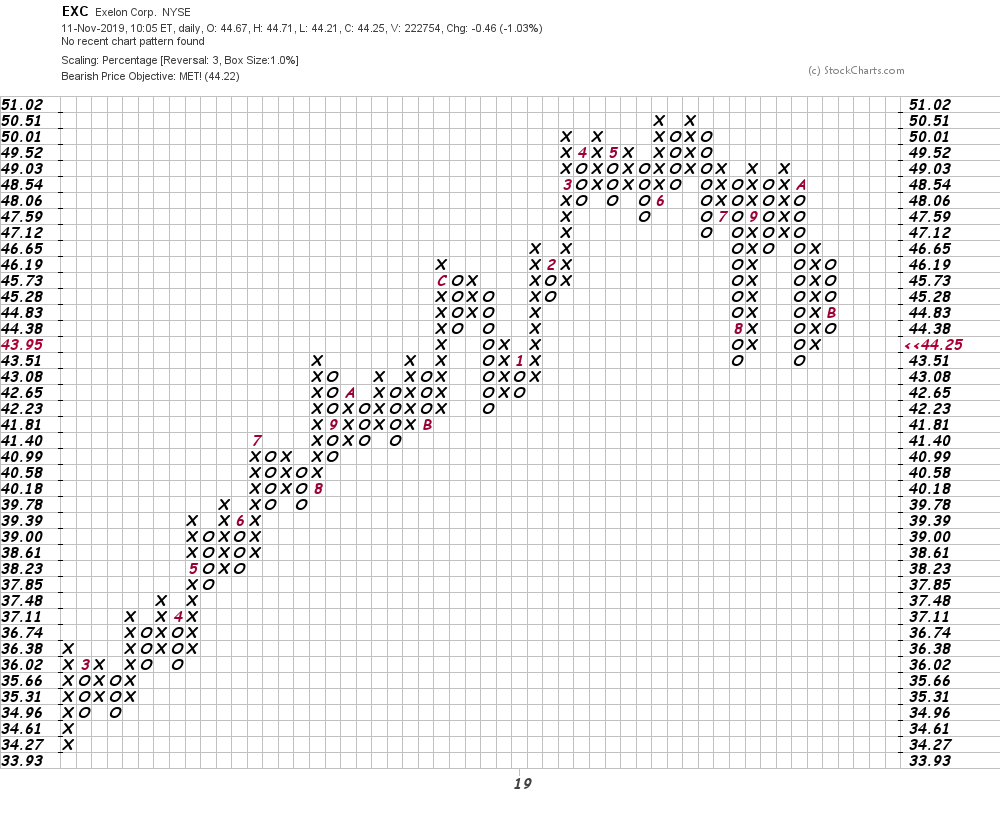 Bottom-line strategy: The charts of EXC are mixed but I remain impressed with the $44 support area. Traders could operate in two ways. Aggressive traders who understand risk could go long EXC here and risk a close below $43.50. Conservative traders could wait for strength above $47 before probing the long side.
Get an email alert each time I write an article for Real Money. Click the "+Follow" next to my byline to this article.
TAGS: Investing | Stocks | Technical Analysis | Utilities | Mad Money