For his first Executive Decision segment of "Mad Money" Monday, Jim Cramer sat down with Ned Segal, CFO of Twitter Inc.  (TWTR) , which in late October reported mixed results for the past quarter.

Twitter aims to have the whole world use its service to follow the topics and events that interest them, whether they be sports, politics, local events or international ones. People want to engage and discuss events in real time, Segal said, and that's what Twitter allows them to do.

When asked about the company's new limits on political advertising, Segal explained that political views need to be earned, not bought, which is why new restrictions are in place and Twitter will no longer allow micro-targeting for political ads.

Segal added that it's also important for the things that political figures say to remain part of the public record, even if those things are offensive to some. That's why Twitter doesn't remove sensitive comments and instead will warn users that the content they're about to view may be offensive to them.

We have looked at TWTR in the past, but let's check out the latest charts and indicators.

In this daily bar chart of TWTR, below, we can see that prices were in an uptrend from late December to early September. Prices slipped lower through the balance of September and well into October. A large downside price gap can be seen in late October with very heavy volume. Prices were already below the declining 50-day moving average line when TWTR gapped below the flat 200-day moving average line. The lows of February and March have been broken and the next area that might provide some support is the $28-$26 area from December. Prices slipped still lower after the gap, but TWTR is starting to show some stability in November.

The daily On-Balance-Volume (OBV) line has been moving sideways this month, suggesting a balance between aggressive sellers and aggressive buyers. The trend-following Moving Average Convergence Divergence (MACD) oscillator has just crossed to the upside from below the zero line for a cover shorts buy signal.

In this weekly bar chart of TWTR, below, we can see the price action of the past three years. Here we can see that the $28-$26 area was support in December 2018 and a couple other times last year. The more times a support (or resistance) area is tested, the more important it becomes as traders are conditioned to buy in that area. Prices are below the declining 40-week moving average line. The weekly OBV line shows a modest decline from early September and the MACD oscillator has moved below the zero line for an outright sell signal.

In this first Point and Figure chart of TWTR, below, we choose to plot even dollar increments and here we can see that the $27 level is key support. The software is reading the price action as distribution (selling) and has projected a possible downside price target of $13. 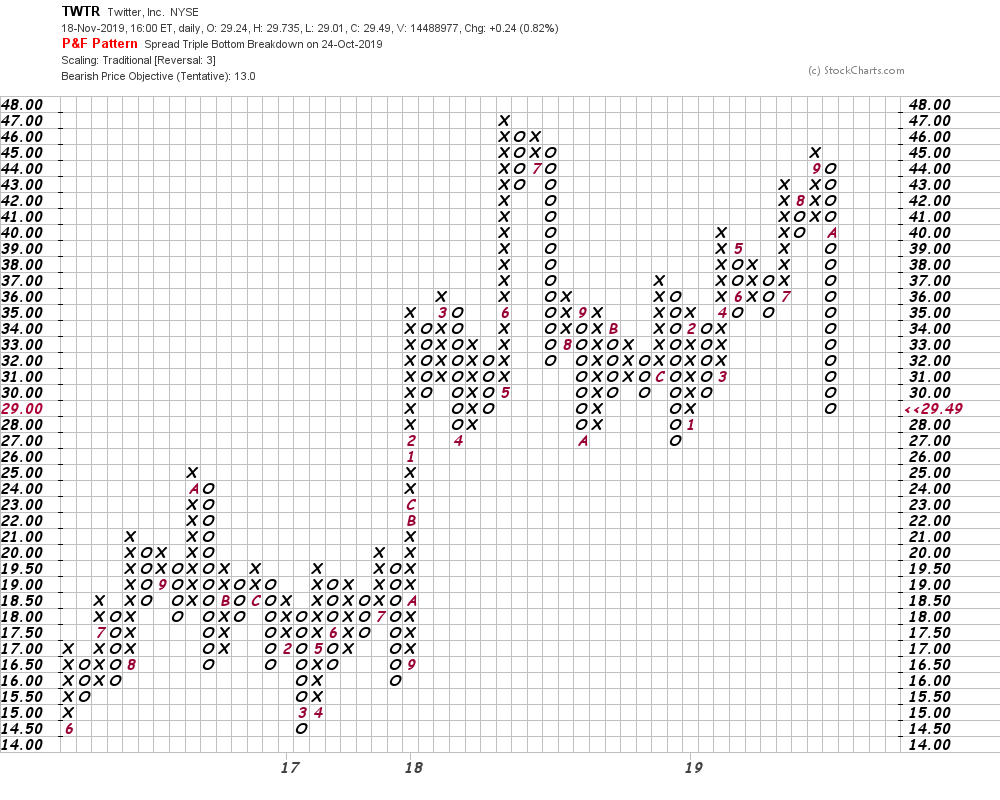 Bottom line strategy: TWTR has found support in the $28-$26 area a number of times and that might continue, but the charts also show that if this support is broken we could have a decline to the $14-$13 area. If I was going to recommend a long position I would suggest a sell stop below $27. However, the risk exists with TWTR that prices gap sharply lower, so a stop order could carry more risk than we are comfortable with. I would avoid the long side of TWTR for now.

Get an email alert each time I write an article for Real Money. Click the "+Follow" next to my byline to this article.
TAGS: Investing | Stocks | Technical Analysis | Consumer | Media | Advertising | Real Money