As Twitter (TWTR) tacks on 15% gains on Tuesday after releasing better-than-expected results, traders are left to wonder what's next.

Is it too late on the long side?

Too early on the short side?

This is a tough spot.

Twitter didn't exactly crush revenue, reporting $787 million against expectations of $775 million. A solid beat for sure, but not crushing.

After adjustments, earnings per share actually came up short, but the before-tax adjusted number demonstrated strength.

Moving forward the company will no longer be reporting Monthly Active Users (MAU) and that may be a good thing. Numbers there have somewhat struggled since the microblogging company began cracking down on fake users.

Revenue guidance of $770 million - $830 million actually holds a midpoint below the current estimates of $819.3 million, but that hasn't stopped the love for Twitter Tuesday.

Before you think I'm immediately going to shift bearish, it is important to note Twitter's stock personifies the idea that an object in motion tends to stay in motion.

I examined the stock's post-earnings action over the past four years when it saw big up moves immediately after earnings. Going back to the middle of 2015, we have a small sample size of five when the stock closed higher by 8% or more on the trading day immediately following earnings.

Of those five times, the stock closed significantly higher 13 days later three times. By significant, I'm talking about moves ranging from 10% to 17% on top of the first day big pop. Another time it closed flat and the single down move was around 3%. Extending that view to 21 days, the stock found itself higher four of the five times with a much broader range of performance. The down move was, again, small.

The immediate reaction in five examples may not make a trend; however, if you examine the performance of over the past 10 reports you would find that the stock is flat or higher eight of 10 times during these same timeframes. The two reversals? Small. Very small.

So, whether you are impressed by the financial results or not, history sides with the concept the stock may not be done running. One glance at the weekly chart, below, shows us Twitter is just breaking out this week. A return to the $44-46 area appears very possible. 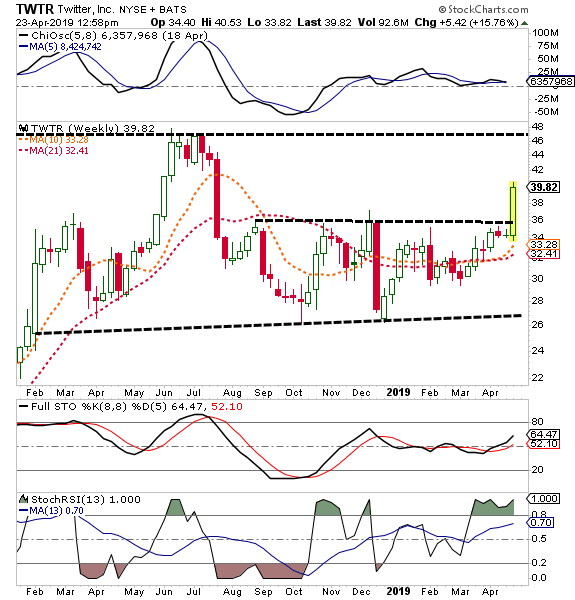 From a trading perspective, bullish trades measure out best, so risk-reversals, buy-writers, call spreads, or bullish put spreads would be what I would explore. As long as Twitter remains over $36, bulls hold the reigns.

If you were involved in the name prior to Tuesday, then the idea of scaling or trailing tighter is solid risk management, but Twitter is not a name I would short simply because the stock is higher by 15%. Nothing about its history supports the idea.