What consumers want is companies to listen to them and to tailor their offerings to their individual needs. Most companies however, still have a long way to go. Companies that have been successful in personalizing, however, have seen revenues grow by up to 70%.

Let's check on the charts and indicators of TWLO.

In our Feb. 2 review of the charts we wrote that "Traders should have sidestepped the big decline in the price of TWLO, so now comes the hard part - can we profit by a rebound? Aggressive traders could probe the long side of TWLO around $200 risking to $176. A $75 to $100 rebound is not out of the question."

In the daily bar chart of TWLO, below, we can see that the stock did make a rebound in early February. The bounce stopped at the underside of the declining 50-day moving average line so hopefully nimble and technically oriented traders took their profits. TWLO declined to a lower low in early March where we saw another rebound unfold.

Trading volume has not really expanded in March and prices are weakening again with TWLO trading below the declining 50-day moving average line and the bearish 200-day line. The On-Balance-Volume (OBV) line has struggled since its low in late January.

The Moving Average Convergence Divergence (MACD) oscillator has been below the zero line for much of the time since August. The oscillator is still bearish but moved to the underside of the zero line.

In the weekly Japanese candlestick chart of TWLO, below, we can see a bullish engulfing pattern in early March but the bottom reversal was not confirmed in the next week with a bullish (white) candle. Upper shadows around $175 are not bullish. The slope of the 40-week moving average line is negative and prices are approaching an oversold extreme when compared to the average line.

The weekly OBV line is pointed down and the MACD oscillator may give us a cover shorts buy signal.

In this daily Point and Figure chart of TWLO, below, we can see a potential upside price target of $178. 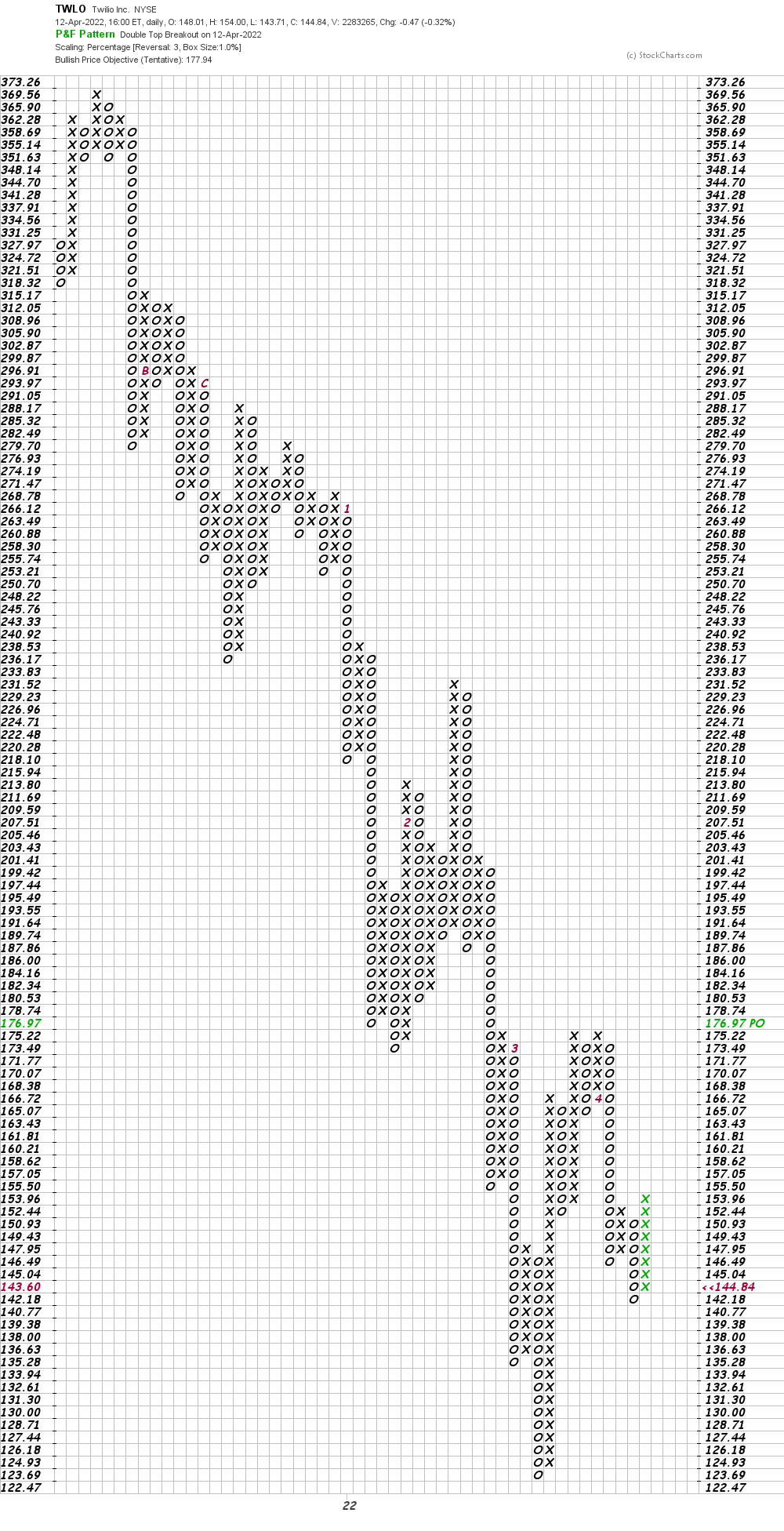 In this second Point and Figure chart of TWLO, below, we used weekly price data with a five-box reversal filter. Here the software suggests a downside target of $67.

Bottom-line strategy: The March price low in TWLO may hold and the stock could start a basing pattern. In this weak broader market environment I do not have a great deal of confidence in that scenario but let's keep an open mind. Meanwhile, I would avoid the long side of TWLO and see how things develop.