The cloud stocks have been hit hard in recent weeks, Jim Cramer told viewers of his Mad Money program Monday evening, and that means investors need to stick with only the best-of-breed companies. In this environment, only cloud stocks with favorable fundamentals and valuation deserve a spot in your portfolio.

When it comes to valuation, Cramer chose the "Rule of 40" method, which says that a company's revenue growth plus its profit margin must be greater than 40. Anything less is worrisome. Using this metric, a company must have either rampant growth or some profits, but it can't lack both.

In the daily bar chart of Action Alerts PLUS holding TWLO, below, we can see that prices bottomed in October, earlier than the broader market in December. The rally continued until June/July when prices stalled around $150 or roughly five times up from the base in 2017 at $30. In August prices declined below the 50-day moving average line and its slope turned negative. This month TWLO closed below the 200-day moving average line and it has begun to crest.

The On-Balance-Volume (OBV) line peaked at the end of July and its weakness tells us that sellers of TWLO have been more aggressive. The trend-following Moving Average Convergence Divergence (MACD) oscillator is well below the zero line after its initial sell signal in early August.

In the weekly bar chart of TWLO, below, we can see that buyers in the $30 base area in 2017 were rewarded by their discipline. Prices recently broke below the cresting 40-week moving average line.

The weekly OBV line shows a strong and bullish rise from early 2018 but recently the line has turned to the downside indicating a shift. The MACD oscillator has been in a take profits mode since May and is now close to the zero line.

In this Point and Figure chart of TWLO, below, we can see a large distribution pattern and a potential downside price target of $81. 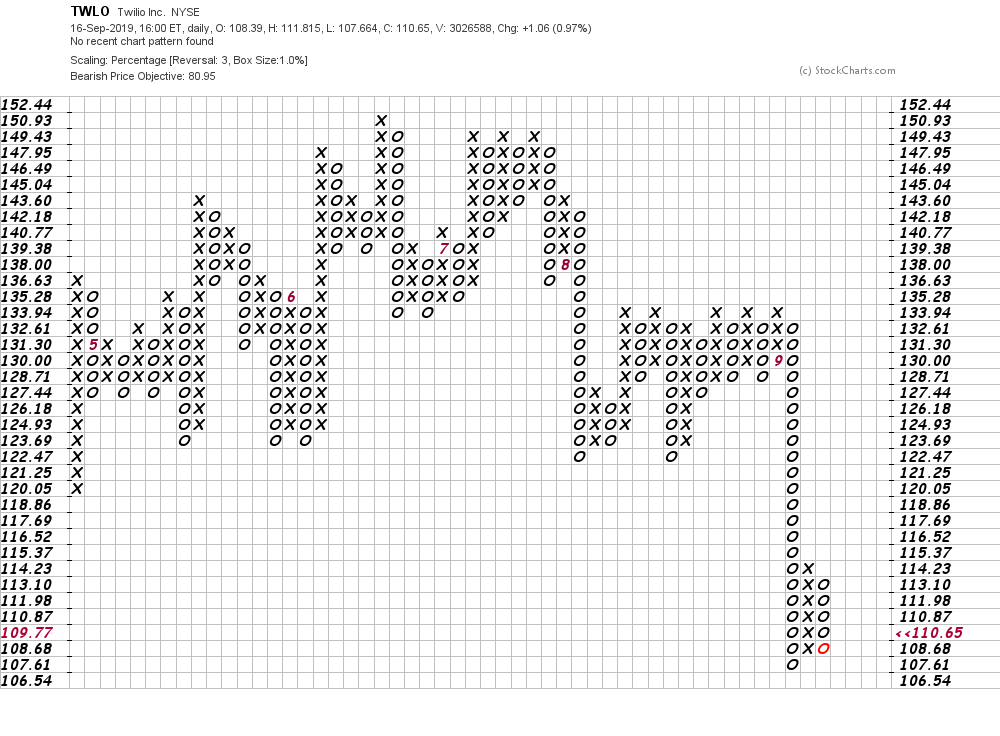 Bottom-line strategy: Stock prices go through cycles or phases from a base to a markup phase to a topping phase and a decline. TWLO has been topping out over $120 since March and its break below $120 began the decline phase. Further weakness to the $80 area is possible.

Get an email alert each time I write an article for Real Money. Click the "+Follow" next to my byline to this article.
TAGS: Investing | Investing basics | Stocks | Technical Analysis | Software & Services | Technology | Mad Money

As we continue to implement social distancing, keep in mind that it will happen commercially as well.

The Fed Must Shift Their Focus to Stimulating the Real Economy

Most of the Fed's programs have been aimed at financial markets functioning.