"My glass is filled, my pipe is lit,
My den is all a cosy glow;
And snug before the fire I sit,
And wait to feel the old year go.
I dedicate to solemn thought
Amid my too-unthinking days,
This sober moment, sadly fraught
With much of blame, with little praise."

Arise, my faithful friends. Arise and fight the last fight of 2022.

For most of you maintaining a net long equity portfolio, which indeed is most of you, the year was a tough one. Nine of the 11 S&P sector-select SPDR ETFs are in the red year to date with but two bells left to ring at 11 Wall Street. Energy (XLE) had a year to remember, up 63.29%. Utilities (XLU) , up 2.42%, are in the green as well. Everything else is blood red, with Communication Services (XLC) , Consumer Discretionaries (XLY) , Technology (XLK) and the REITs (XLRE) suffering losses of more than 25%.

Have markets finished draining technology stocks of their valuation? Or should I say "overvaluation"? Is there some date out there where the potential for growth might once again reward? What will come of China's recent surge in new Covid infections? Does this suppress the potential for China to once again contribute to global GDP? Or does this, after initial suppression, release China from the shackles of this pandemic that literally every other large nation threw off at least a year ago?

Does at some point, a condition exist where Russian forces might sue for peace with their Ukrainian neighbors? Or, in a perfect world, retreat back to their own borders? At what point does the Federal Reserve Bank cool its aggressive 2022 stance on monetary policy? Does a still-irresponsible US legislature, while ever-supportive of loose fiscal policy, continue to blame the central bank for being slow in taking on consumer inflation that is of their own creation? What does the US dollar do as monetary conditions tighten globally?

How quickly does the inflation story abate as the overbearing theme of negativity in the American household, to be replaced by a lack of economic growth as corporate earnings recede? As margins contract? As wage growth stalls? As hours worked and ultimately headcount are cut? Are soft landings even possible?

Oh, arise my faithful legions. Arise and fight this day. For there are troubles behind and troubles ahead. Arise, give thanks. Face the challenges of this moment and the next. For we are the lucky few. May we never forget that.

Equities are by many measures about to end their worst annual performance in many years. Meme stocks turned back into pumpkins. The FAANG names got fanged. Bond markets for the most part failed to offer protection. Real estate is still in the process of cracking. Gold did provide a service as a store of value (central banks have been purchasing physical gold in 2022 at the fastest pace since 1967). There is that. Bitcoin, once thought of as a gold-like asset for a younger generation, most certainly did not.

Our problems, a few of which are mentioned above, are for the most part ongoing. Resolution remains either elusive or incomplete. Inflation will likely slow significantly in coming months. Are financial markets still badly broken? You tell me. The spread between the yields of the US Two-Year Note and US Ten-Year Note inverted briefly last March and has remained inverted since early July. The yield spread between the US Three-Month T-Bill and Ten-Year Note, which is the most important spread in our economic universe, has been invented since October.

Thus, I am forced not to predict for others, but to expect for myself and my family a US recession in 2023 that could become overtly evident as early as late in the first quarter or early in the next. I have noticed that over the course of my career, I have often seen coming economic conditions well ahead of most other economists, and in doing so, often prepare for conditions earlier than I could have. It is for that reason that I cautiously admit that recession could strike later in the year than I project. That said, my base case for a significant slowing in activity is for Q2.

Late 2023 rally? For the economy? For the equity marketplace? Successive down years are rare. Anything can happen. Quick story: A long time ago, in a very desolate place, I was being harassed by a lemon shark (I think) which I had clearly ticked off. As I made haste to escape this creature, I ran right into a second, more powerful shark. (Yes, I lived.) Point there is... something unforeseen always happens.

Santa tried to get back in the game on Thursday. Equities rallied as the US Ten-Year Note finally got back in the win column after a three-day beat-down. Of all the equity market indexes that I follow closely, the Philadelphia Semiconductor Index finally showed some strength, leading the way north at +3.32%. Among large-caps, Skyworks Solutions (SWKS) and Lam Research (LRCX) led the group. This propped up the Nasdaq Composite, which tacked on 2.5%. The S&P 500 gained 1.75% for the day as that index was out-performed by its smaller-cap relatives.

All 11 S&P sector-select SPDR ETFs went green on Thursday, led by the two "growthy" funds, Communication Services, and Technology. Defensive sectors such as Utilities and Staples (XLP) closed the session at the bottom of the daily performance tables.

Winners beat losers by a rough 5 to 1 at the New York Stock Exchange and by 9 to 2 at the Nasdaq. Advancing volume took a whopping 89.4% share of composite NYSE-listed trade and an 88.8% share of that metric for Nasdaq listings. What leaves some doubt in any professional conviction that this was more than an algorithmic attempt to rouse Santa was the fact that NYSE-listed trading volume in aggregate decreased from Wednesday into Thursday. This condition was not true for Nasdaq listings, which enjoyed an 8% day-over-day increase.

I drew up a couple weeks back a chart of Coca-Cola (KO) that showed the stock completing a cup pattern with a $64 pivot (left side of the cup). That was the fullback dive. The smash play up the middle failed to gain a first down. The stock contracted small, adding a shallow handle, which moves the pivot to the right side of the cup, which ironically is still $64. 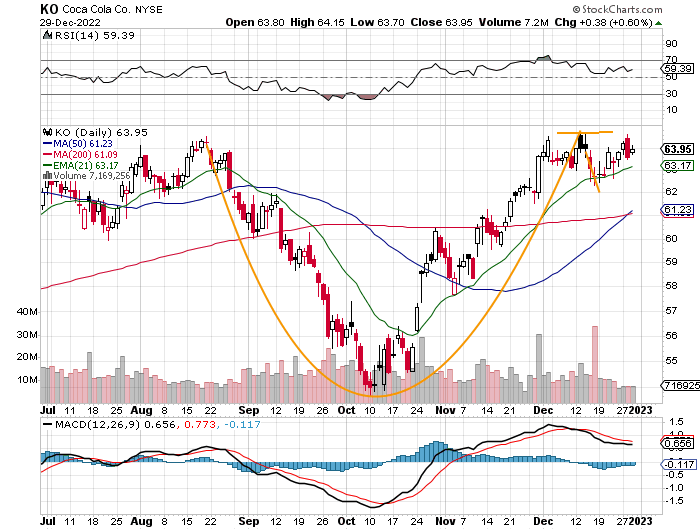 This is where the quarterback fakes to the weak side, puts the ball in the belly of the fullback again, only this time to pull the ball back and then starts moving to the strong side. The tight end has sealed the defensive end, with the lead halfback taking the outside linebacker out of the play and the flanker sealing off the cornerback. Now it's just our QB and the trial halfback or pitch man. Can Coca-Cola break resistance on this renewed attempt and gain that first-down marker?

Relative strength is good. The daily moving average convergence divergence (MACD) is sputtering in place but could be set up for a bullish crossover. Speaking of bullish crossovers, the stock has just experienced a "golden cross" while riding the 21-day exponential moving average (EMA) since mid-month. Yes, Coke could break out here. The table is set.

For avid readers, my price target remains unchanged at $75. My panic point moves up to $59, which would represent a loss of both the 50-day and 200-day simple moving averages (SMAs).

Happy New Year, gang! Catch you kids down the road a bit.

Get an email alert each time I write an article for Real Money. Click the "+Follow" next to my byline to this article.
TAGS: Economy | Investing | Stocks | Technical Analysis | Treasury Bonds | Beverages | Food & Staples Retail | Consumer Staples | Real Money