Really, it did not take much. After that "shock and awe" two and a half day rally coming out of last weekend, there were profits to be taken.

Equity markets had broadly become "short-term" overbought on any kind of chart measured with candlesticks representing half hour (or smaller) increments, even if this impact was not quite so apparent on charts using daily candlesticks. With about ninety minutes left in the trading session, equity markets were broadly delivered a haircut. Not an earth-shattering selloff, but a haircut that largely left much of the market close enough to where the day began.

It was easy to blame the subtle change in momentum on Amazon (AMZN) , as that company had reported an absolutely wonderful quarter but had also disclosed a planned change in leadership that would still be six to nine months away. Portfolio managers had known about the planned Jeff Bezos to Andy Jassy hand-off since the night prior, and AMZN had rallied midday, so honestly gang, that was not our catalyst.

By the way, I did make a partial AMZN sale as I had written on Wednesday morning on Real Money. I fully intend to buy that sale back, hopefully at a lower price, though my execution was poor on the out ($366). So let's see where I can get them back. This is the part of this game that I do so enjoy, I must admit. Guilty pleasure. The shares are recovering nicely overnight.

No, my friends, markets waffled late on Wednesday over both doubts and affirmations based on the future of the now being negotiated first fiscal Covid-relief package of the Biden era. Think the impact of keyword reading algorithms is overstated? Think again.

The president expressed flexibility on public eligibility for the next tranche of "helicopter money." President Biden also suggested that Democrats might compromise on the size of several programs within his proposal that could lead to an overall smaller package. Markets had already and quite quickly tried to price in something close to the $1.9 trillion that the president had outlined as the Democrats don't really "need" to compromise in order to enact law under the process of reconciliation.

Much Ado About Nothing?

No deceived lovers here. Wednesday's mild selloff does remind us that right now any headline fiscally related, at least until tomorrow's January job creation numbers hit the tape, will cause some volatility. Yes, I did see the ADP print.

What did the Dow Jones Industrials, Dow Jones Transports, S&P 500, S&P MidCap 400, S&P SmallCap 600, Nasdaq Composite, Nasdaq 100, and Russell 2000 all have in common on Wednesday? They all closed within 0.45% of where they closed on Tuesday. In fact, amongst all of those indices, only the two small-cap indices and the Nasdaq 100 managed to move more than 0.12% for the session. I kid you not.

Yet, market breadth was absolutely fantastic. Winners beat losers at both of New York's primary equity exchanges, decisively so at the Nasdaq Market Site. While aggregate trading volume tailed off significantly for NYSE-listed names, volume remained heavier at the Nasdaq. Advancing volume absolutely dominated declining volume at both exchanges. The implication? That perhaps the bid side just walked away late in the day as a secondary factor to the keyword-inspired sell programs that turned the tide late in the day.

Energy stocks ran wild as front-month WTI Crude futures made a run at the $56 per barrel level. I see them trading just above $56 right now. The banks also had a strong day as yields for the U.S. 10-Year Note scraped 1.15% prior to contracting a bit overnight. This pushed the U.S. 2-Year/10-Year spread as high as 104 basis points and the U.S. 3-Month/10-Year spread as high as 111 basis points before buyers made their presence felt on the long end of the curve. Overnight, the 10-Year yields roughly 1.13%, and I see the two most important spreads down to just a pinch more than 101 bps and 108 bps, respectively.

Right now, this steepening of the Treasury curve remains a market positive as this condition is reflective of both increased optimism over vaccine distribution and fiscal policy inspired growth supported by ultra-loose monetary conditions. Not to mention that for now, any increase in velocity will cause at least some short-to medium-term inflation.

There is a point where if longer-dated yields move high enough, defensive-minded investors will be drawn from equities to debt securities. This is not that. These rates are still low enough where both asset classes can act in isolation without one drawing investment from one another. There will be at some point a level. Just to keep that in mind.

Sellers appeared to have lost their taste for aggression overnight. For perhaps good reason. In a fifty/fifty senate, who the vice president is only matters if neither side loses an individual vote on any issue. On the Democratic party side, when it comes to fiscal matters, West Virginia's Joe Manchin is seen as the vote most likely lost. Manchin is clearly a fiscal conservative at heart, and represents a rather socially conservative constituency. He has to appear to be defending the interests of those who elected him.

On Wednesday, Manchin spoke to the media, and gave the impression that he would be OK with a relief package approaching the president's proposed $1.9 trillion, though he did express a preference for a more targeted approach to the $1,400 direct payments to individuals that we spoke of above. Manchin has also expressed reservations over passing a national minimum wage as his state of West Virginia would be a prime candidate for an adverse reaction in terms of increased unemployment relative to an increased cost per employee to employers.

Manchin has more power right now than perhaps any other member of the U.S. Senate.

We already know why Alphabet (GOOGL) surged and Amazon sold off on Wednesday, despite posting excellent quarters side by side. That action was news driven. Profits were taken across the rest of FATMAN as well.

Facebook (FB) gave up a few pennies for the session. Tesla (TSLA) surrendered more than 2%. (Did you guys read CEO Elon Musk basically telling consumers not to buy one of his cars during periods of increasing production? The man is simply incredible.)

Apple (AAPL) and Netflix (NFLX) also had negative Wednesdays. That said, even after experiencing the same selloff over Wednesday's final 90 minutes as did everyone else, Microsoft (MSFT) still posted a 1.5% increase for the day. In fact, Microsoft, since short-term bottoming out in mid-January ahead of reporting an outstanding quarter, has just kept on keeping on. 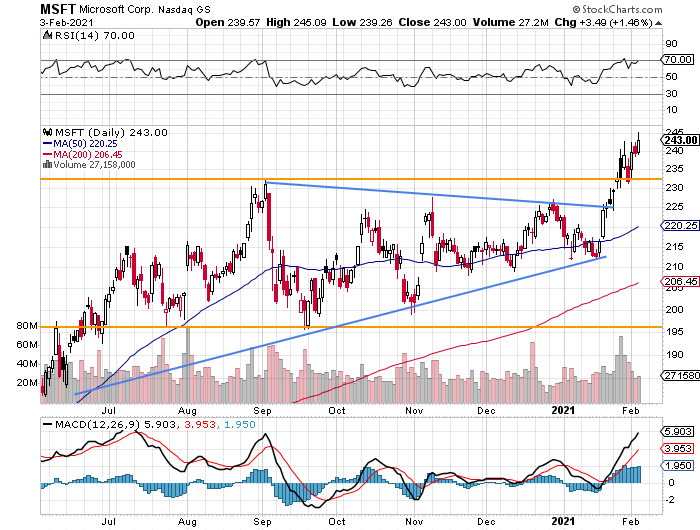 Readers will see a specific narrowing series of lower highs and higher lows (closing pennant) leading to an explosive move higher that took the MSFT share price past the $232 pivot created by a broader consolidating base containing that shorter pattern. While this movement has now created a Relative Strength reading of 70, and that level is where both humans and algorithms consider both this stock and most stocks technically overbought, there is no denying the direction (my opinion) that MSFT is moving in.

Look at this chart, above. Every time the RSI reaches 70, or comes real close, the share price has peaked, consolidated and then moved higher within a couple of weeks. Want to know when to initiate this name, or add to an existing long? Here's your card. (No, not here.. wait a few days.)

Overall, the action is quite healthy. I remain enthusiastically long MSFT. CEO Satya Nadella remains on my short list for second-favorite CEO.

Spotify Technology (SPOT) missed sort of badly on the bottom line while beating on the top line. The name sold off rather hard (-8%) on Wednesday after CEO Daniel Ek raised caution in his letter moving forward. I just have one question...

Look at the last three sessions. Has either gap filled? When this happens, are the gaps offsetting as if neither one ever happened? Or, is the space in between $332 and $338 still from a technical perspective... likely to fill? Serious question. I really don't know.

Get an email alert each time I write an article for Real Money. Click the "+Follow" next to my byline to this article.
TAGS: Federal Reserve | Futures | Investing | Jobs | Markets | Politics | Small Cap | Stocks | Treasury Bonds | U.S. Equity