On the bottom line, Comcast's (CMCSA) headline numbers don't appear to be suffering from cord-cutting and the streaming wars, but beneath the surface that might not be 100% true.

That being said, Comcast is performing, so even if cord-cutting is having some impact, Comcast is finding ways to alleviate that pressure.

The company reported earnings per share of $0.79 on revenues of $28.4 billion. The bottom line beat by $0.03 while revenue came up just shy of estimates. The miss of $0.13 billion is virtually an in-line result, in my view. Good, but not great, and probably the reason why we are seeing Comcast shares trading lower Thursday.

Income and value investors will like the record free cash flow of $2.5 billion as well as the bump in the annual dividend to $0.92 per share. That 10% bump brings Comcast's yield up to 2%.

For a company that grew full-year revenue 15.3%, it should fall into the growth and income portfolios for investors with a moderate risk tolerance. Given that strong FCF, there's no concern Comcast will be going the way of the dinosaur any time soon.

The company brought on 442,000 new (net) high-speed internet customers. It even showed an increased EBITDA of 14.2% for NBCUniversal Broadcast Television.

Video and voice, not surprisingly, fell year over year comparing quarters and full-year numbers fell slightly. Advertising revenue was crushed by double-digits. Those numbers do represent the impact of cord-cutting.

Again, the results mean Comcast is adjusting to the impacts of cord-cutting, and doing it rather well, but the days of big-time growth are likely gone without some major acquisition. 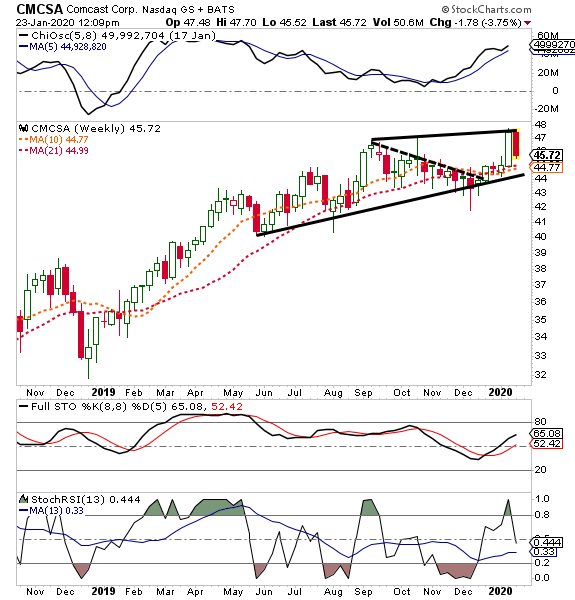 On the technical side, I'm watching $44 on a weekly basis. As long as that level holds, then the bullish trend line dating back a year remains intact.

Trend and volume favor the bulls, but Thursday's drop has the potential to damage momentum if the stock does not manage to bounce before Friday's close.

Overall, these numbers don't blow me away, but they are admittedly better than what I anticipated. Comcast is adapting better than expected to cord-cutting, but traditional advertising is going the way of the dinosaur, if there's an obvious takeaway from Thursday's numbers.

All of this equals me sitting on my hands until the stock does something more from here.

(Comcast is a holding in Jim Cramer's Action Alerts PLUS member club. Want to be alerted before Jim Cramer buys or sells this stock? Learn more now.)

Tim Collins provides options trade ideas each day on Real Money Pro, our sister site for active traders. Click here to learn more and get great columns, commentary and trade ideas from Tim Collins, Mark Sebastian, Paul Price, Doug Kass, and others.
Get an email alert each time I write an article for Real Money. Click the "+Follow" next to my byline to this article.
TAGS: Earnings | Fundamental Analysis | Investing | Markets | Stocks | Technical Analysis | Trading | Stock of the Day