Get your motor runnin'

Head out on the highway

In Whatever comes our way

First... you got a helmet? Might be a good idea to buckle that chinstrap. I watched a financial news anchor after the closing bell on Tuesday. The anchor said something along the lines of "Dow and S&P up small, Nasdaq traded off a bit" and I immediately knew that this anchor had spent less than a minute looking at what actually took place across our marketplace for the day. They have their job to do. We have ours. Maybe a market where none of the big three large-cap indices move more than half of one percentage point from one close to the next seems dull, or listless to a less than engaged public -- but if they only knew. If they only knew how we got where we went on Tuesday, I do bet they'd care.

Equity markets, especially early on, had a terrible "risk-off" feel to them. Still, with the Fed Chair's testimony on our immediate front, I don't think any of us expected markets to stay precisely where they were prior to 10 a.m. on the East Coast. Once jaws started flapping, algos would start reacting, and at least for those wearing net long portfolios, thank goodness they did.

The end results may have looked benign, but breadth was truly horrendous, even with the equity market's broad rebound. One can not say that investors moved toward the cyclicals or sought safe haven for that matter. Energy resumed its place atop the sector-performance leaderboard, but the Discretionaries finished in dead last. Utilities finished in second place, while Staples and Health Care finished near the bottom. Eight of 11 sectors finished in the green despite the fact that losers beat winners decisively at the NYSE and by 5 to 2 at the Nasdaq Market Site.

Aggregate trading volume notably increased for names listed at both exchanges, with declining volume outpacing advancing volume by a narrow margin on Wall Street but by a whopping 7 to 2 up at Times Square. I would have to say that even with the drawn-out six-hour market comeback experienced over most of Tuesday's regular session that there was undeniably enough professional distribution to at least keep astute investors on edge.

Investors should be cognizant that the VIX did start to spike on Tuesday, but not uncontrollably. Put/call ratios curled higher but remain below medium-term averages. The S&P 500 did almost a precise turnaround at the 50-day simple moving average (SMA) after surrendering the 21-day exponential moving average (EMA) earlier.

The implication here is that shorter-term traders bailed early, and then may have piled back in once investors bought the dip. This chart makes it all look so easy, but the action was indeed sloppier for the Nasdaq Composite.

Please take note that the Nasdaq Composite closed precisely at its own 50-day SMA. Wednesday morning's opening bell may be the most important sound heard by traders in a good long time. The Nasdaq Composite had not seen this (blue) line violated since Nov. 3, which by the way was Election Day.

The world tuned in. Well, at least everyone who might be in charge of running anything. The Nasdaq Composite was off a rough 4% at the time. Tesla (TSLA) was down something like 12%. Bitcoin sold off on Janet Yellen's remarks, but even after that warning, the cryptocurrency found buyers. Remember that round of purchases that I had made on Monday night. I had already gone to a broader round two by the time Powell spoke. I even started buying back the portion of my Amazon (AMZN) long that I had sold in early February. That was a good trade, but the broad move was really one of self-defense.

Powell was positive, but he threaded the needle better than Joe Montana down by six with a minute to go on any given Sunday. After mentioning the progress made in this nation's fight with the virus, Powell pointedly said, "While we should not underestimate the challenges we currently face, developments point to an improved outlook this year." More specifically, Powell added, "The economy is a long way from our employment and inflation goals, and it is likely to take some time for substantial further progress to be achieved. We will continue to clearly communicate our assessment of progress toward our goals well in advance of any changes in the pace of purchases." Whoop, there it is. Easy money. No fear of inflation.

You do know that our market is run by keyword reading algorithms and not human beings, right? In that one line, Powell told investors that the foot stays on the gas until labor markets substantially improve and until consumer-level inflation becomes an overt problem. The U.S. Treasury yield curve, and with it our most-focused-upon yield spreads finally seemed to relax, at least for the afternoon. Longer-dated Treasury yields are rising overnight into early morning, but at least to this point (zero-dark thirty) equity index futures have not reacted negatively.

The driver for much of the bullish activity seen across the equity market space in early 2021, as well as the steeper yield curve, and of course, unsure inflation expectations moving forward, is the $1.9 trillion fiscal support plan moving through Congress seemingly at a snail's pace. No wonder markets are volatile right now. This is a lot of money that will have to be borrowed, or more specifically have to be created in order to be borrowed. And it does not even come close to stopping there. Once this (deep) deficit spending plan is passed into law, the legislature will move on to what is expected to be a plan for a massive infrastructure rebuild.

Now, let's slow this down so we can think about it. $1.9 trillion now, and then probably a cool $3 billion to $4 billion later this year. Of course Jerome Powell is going to let us know in advance when he plans to close the candy counter. Because it will never close. Of course, Treasury Secretary Janet Yellen is talking about super long-term maturities. Maybe we should skimp on something? Nah, why talk crazy? Just borrow, baby. Create and borrow. Your great grandchildren? They'll figure it out. Besides, will you ever even meet them? Sounds funny? Sounds awful. Make no mistake, my friends, that is the plan. Inch by inch, step by step, out of a permanent necessity to avoid short-term pain, leaders edge toward the final nail in civilization's coffin... Modern Monetary Theory. Just borrow what you need. Don't even tally the debt. Why bother? We can always barter after the collapse.

All sarcasm aside. There is at this time, a world war-like need to borrow. I get that. I get COVID-relief. That's necessary. That's also less than half of this $1.9 trillion plan. I also get the need for an infrastructure rebuild. Not only does that ramp up demand for goods and labor, but also speeds along velocity. In fact, after we rebuild all that needs to be rebuilt, maybe we should build stuff we don't need. Just keep building. Build airports, and office buildings that will never be used. Build new cities that we can inhabit in case we ever get sick of the old ones. Just keep people working. I don't necessarily agree with that, but I get it. That's how China keeps (to be politically incorrect) coal in the fire.

Maybe we don't need to borrow what does not work toward COVID recovery, or rebuilding infrastructure? Nothing more. No fancy pork at all. Where I am really going here is this, we need to borrow $4 billion to $5 billion more than we would have this year, than if the pandemic had just not visited our shores.

Maybe, just maybe. Now I know this is beyond the comprehension of those in office, we decide to back our fiat currency with hard assets. Gold? Sure, but could be anything, even real estate. There is going to be enough overvalued and permanently empty office space out there for sure. You want to remain the world's reserve currency at this time of great expansion of money supply, as much of the planet already resents the U.S. dollar's global reach? Put a quality premium on the currency. One does not have to be too creative in order to do so in such a way as to allow for a still elastic money supply. Imagine the purchasing power of the U.S. dollar as the only sound currency on earth... paper, or digital? Imagine the deflationary impact of this move just as the inflationary genie is unleashed from the bottle? Could be a counter.

I don't trust Jay? I would not say that. It's just that above-trend inflation is in everyone's best interest. Everyone that is, except you and I. You want the rest of the world to buy our debt so that we don't have to. Catching on yet?

Sarge, you're crazy. Heard it all my life, sports fan... Yet here I am, still standing. Listen, I know thinking outside of the box is difficult and frowned upon across economic circles. That's OK. If these very thoughts are beyond the capacities of your collective Ivy League educations, then the two-fisted kid from the working class neighborhood who also had to figure it all out for himself is here to help.

Since the lock-up period expired, Palantir (PLTR) president and co-founder Stephen Cohen has sold 2 million shares, leaving himself a long position of approximately 203,000 shares. General counsel Matthew Long has sold more than 503,000 shares, leaving roughly 782,000, while chief legal officer Ryan Taylor sold 218,000 shares leaving 1.58 million. This is what we expected, and this has placed the pressure on the shares that we were hoping for. 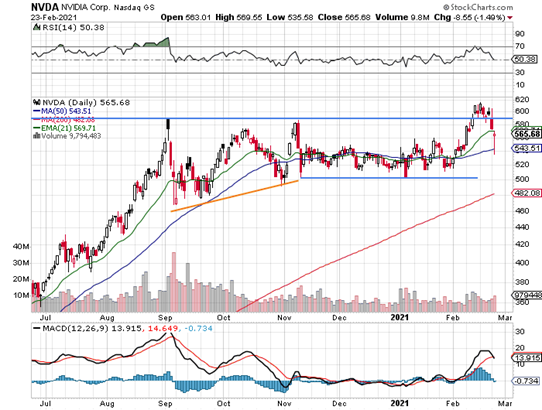 Remember this chart from just one day ago? Check out the relationship between NVDA this week and its own 21-day EMA (green line).

Holy Toledo Batman! Talk about a line of resistance/support. Springboard? More like the swinging doors of the Dodge City Saloon. Has anyone seen Marshall Dillon?

Expectations for tonight are for earnings growth of 48% on revenue growth of 55%. That said, guidance will matter more than results. I may use that green line as a trading tool today, but I will go into the numbers with the same inventory I have right now. Count on it.

Get an email alert each time I write an article for Real Money. Click the "+Follow" next to my byline to this article.
TAGS: Earnings | Futures | Indexes | Investing | Markets | Stocks | Trading