Eternal blackness. The zero dark hours. Nothing is eternal, not here, not now.

Alluring? The twilight of dawn. The beauty of sunrise ..... more rumor than fact. For now. Still black?

It was just Wednesday that President Trump had reiterated his threat to expand the schedule of U.S. tariffs on Chinese exports to include another $300 billion of those goods, even indicating that perhaps 10% would be a good starting point. It was also just Wednesday that Bloomberg News reported that employees of Huawei Technologies had collaborated on several research projects with the Chinese military in recent years. That's important.

All seemed to be deteriorating for those expecting maybe more than they should in the way of results from Saturday's scheduled 90-minute meeting between Presidents Trump and Xi. Then came this nugget reported first in the South China Morning Post, and now everywhere else as well. The U.S. and China have tentatively agreed to a trade truce (yes, again) in order to kick-start negotiations on working toward a deal (yes, again). This agreement will avert new tariffs from being implemented as both sides work toward reaching a new end.

Global markets reacted well to that news. Then came news that President Xi was heading to Osaka with a list of terms, including the removal of the U.S. blacklisting of Huawei Technologies, thus preventing U.S. firms from supplying the telecom giant with the dubious reputation. Markets reacted poorly to that news.

Understand this. The ball comes in a lot faster than many think. Hitters are forced to anticipate the pitch.

Chess match. If correct, the batter likely reaches base safely. However, the batter, in order to be a good hitter, must have enough bat control and quick enough reflexes to intentionally foul off those offerings close enough to be called strikes but that perhaps were not somewhere in the batter's wheelhouse.

This is what these two world leaders are doing. They don't like what they are seeing at the plate. President Trump is throwing heat. President Xi brings that nasty 11-5 curve. In order to prolong the at-bat, both leaders are intentionally fouling off everything offered as each tries to simply paint the black.

I thought it interesting on Wednesday, prior to President Trump's departure for Osaka, that he appeared at the Fox Business Network and defended such US firms as Alphabet (GOOGL) , Facebook (FB) , Amazon (AMZN) and Apple (AAPL) against the European Union (EU), or more specifically against EU antitrust commissioner Margrethe Vestager. In reference to Vestager, the president stated, "She hates the United States perhaps worse than any person I've ever met." Hmm. Tell us how you really feel.

The president is inferring that these kind of lawsuits should be brought against U.S. firms by U.S. agencies, such as the Department of Justice, not by European authorities. What makes this more than just a sideshow are a couple other items.

For one, Vestager has launched yet another antitrust case against a U.S. corporation this week. This time the target is Broadcom (AVGO) , which according to the Financial Times is accused of using contractual restrictions to shut out competitors in the space of modems and TV set-top boxes.

Second, The Wall Street Journal reports that European governments such as those of France, Germany, and the U.K. are setting up a company known as Instex. The idea is to give European entities the ability to import and export goods to and from Iran while avoiding direct flows of currency. Earlier this week, EU leadership indicated that Instex is ready to be deployed. By the end of the week, those same nations -- France, Germany and the UK -- are expected to inject some funds into the project in order to create a line of credit.

Why Would Europe Do That?

With Iran nearing a point where that nation will exceed the 2015 nuclear deal's limit to supplies of enriched uranium, it seems European powers are bending over backward in order to preserve this deal despite the U.S. withdrawal. It certainly seems to be a snub of the Trump administration's increased sanctions on Iran and Iranian leaders in order to maximize economic pressure... a snub despite recent Iranian aggression against both lines of commerce in the region as well as against U.S. military assets operating over international waters.

With all of this rising tension, keep in mind that President Xi of China is not the only head of state that President Trump is scheduled to meet with in Osaka. President Trump will meet on Friday with German Chancellor Angela Merkel, their first meeting since the president publicly called out Germany and several other NATO allies for failing to live up their financial commitments last year toward the alliance's common defense, relying instead on U.S. taxpayers. Let's not also forget the sale of Russian natural gas. There could be fireworks in Osaka, and not from directions that financial markets expect.

The headline number for May was awful. Blame Boeing (BA) . Ex-Transportation, the month was positive. Now, apparently, test pilots have found new potential flaws that could further delay the return of Boeing's 737 Max aircraft to the skies.

With the broader market for large-cap multinationals slightly overvalued in comparison to medium-term norms (not accounting for the fiscal nor monetary environment), one might surmise that due to the condition of trade between the U.S. and China, which has helped slow global economies, that industrials are slightly undervalued by the same metrics.

Caterpillar (CAT) is perhaps among the most exposed, reliant upon Asia for roughly 20% of revenue generation, and thus it trades at just 10x forward earnings. As we already know from trading Micron (MU) , an absurdly low multiple can often mean that estimates are too high. Either that, or the shares should have a fundamental catalyst to the upside in their future. 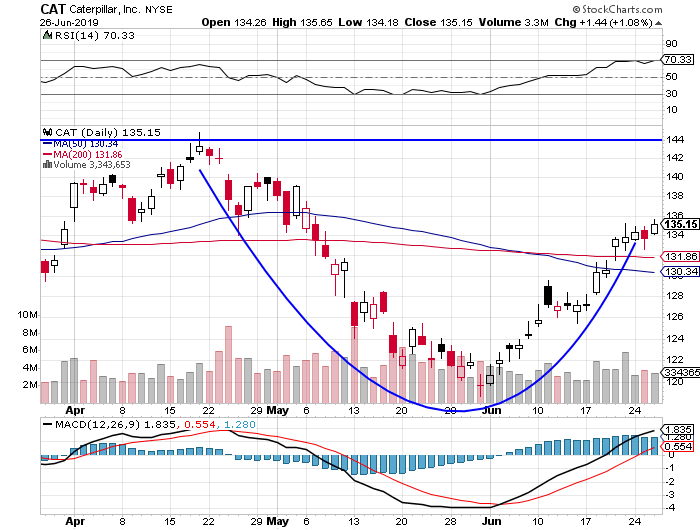 For investors, CAT yields 2.55% and will need the Chinese economy to get back on track in order to generate sales growth. For traders, this weekend presents potential short-term upside.

Do I believe that Presidents Trump and Xi will try to strike each other out? Probably. Will they possibly throw each other a meatball, so that on each side of the Pacific victories might be claimed? They might. I'll go into these meetings with a trade-size long position -- ballpark, one-eighth of what I consider a full investment-size position -- in Caterpillar. Yes, that's new. The shares trade below $135 here on Thursday morning. My target? I'll say $144, but I'd settle for less.

Get an email alert each time I write an article for Real Money. Click the "+Follow" next to my byline to this article.
TAGS: Regulation | Investing | Stocks | Aerospace | Technology | Industrial Goods | Industrials | Manufacturing | China | Europe | Real Money